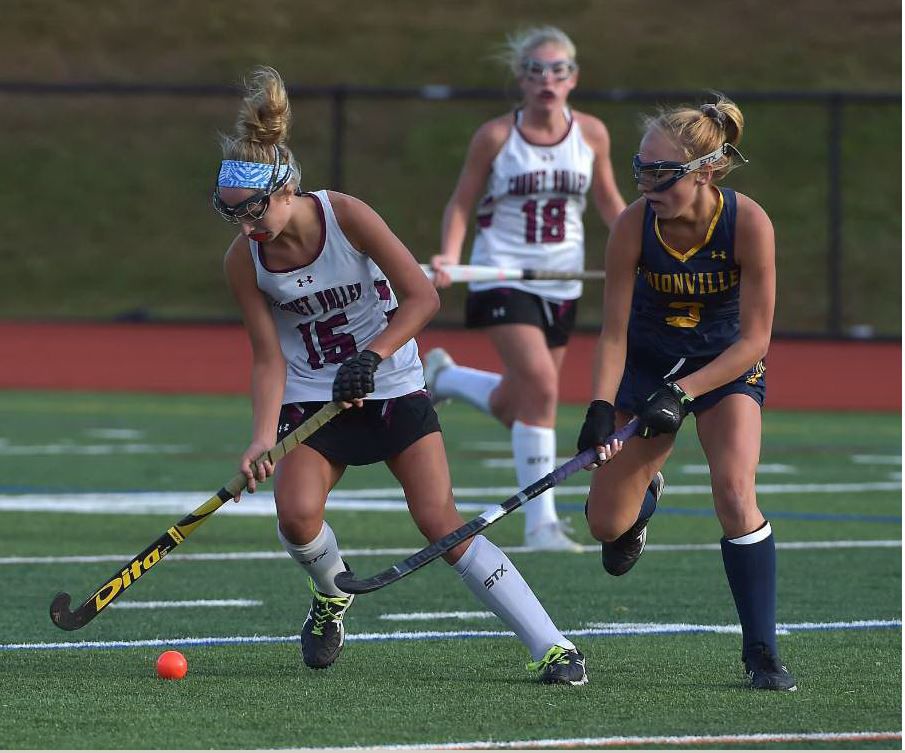 Tina Rawa, left, in action against Unionville earlier in her career, had two assists as Garnet Valley opened the season with a 6-0 victory over Ridley on Saturday. (DFM File)

Steve Small’s goal was the difference as Bonner-Prendergast rallied for a 2-1 victory in overtime over Archbishop Carroll in Catholic League boys soccer action.

Small scored five minutes into OT to give the Friars the win. Gio Karasavas tallied with five minutes into regulation for MBAP to send the game into the extra session. Goalie Tommy Denig made seven saves to collect the win.

Delco Christian 8, Lancaster County Christian 1 >> Ryan Parker had one goal and one assist to help the Knights open up a 5-0 lead at halftime in nonleague action Friday. Declan Thompson led the offense with two goals and Zeke Garner chipped in with a pair of assists.

Eight players scored as Springfield christened its new turf stadium with an 8-0 victory over Upper Darby in the Central League.

Moira Penot made more than 10 saves in goal for the Royals.

Garnet Valley 2, Ridley 0 >> Maddie Kadish scored once in each half and Kayleigh Saboja made five saves to post the shutout. Mia Zebley had the assist on the first goal by Kadish.

Lower Merion 2, Marple Newtown 1 >> Maya Masotti found the back of the next 24 seconds into overtime to lift the Aces of the Tigers.

Grace Goldbeck had the goal for Marple Newtown.

Archbishop Carroll 9, Bonner-Prendergast 1 >> Kiley Motice collected two goals and one assist as the Patriots rolled in their season opener.

Keri Barnett added one goal and one assist, while Elia Wright, Olivia Stout, Kayla DeMola, Cece Cerico, Jasmine Vega and Molly Freil pitched in with one goal each.

Great Valley 6, Sun Valley 2 >> Senior Chiara Robinson scored a pair of goals to pace the Vanguards Friday. Robinson fought off a defender to score on a breakaway to get Sun Valley on the board in the second half. She then converted a pass from freshman defender Kylie Robinson to make it 4-2. Jaina Preuhs made 18 saves in goal for the Vanguards.

Nicolette Saccomandi collected two goals and one assist to help Garnet Valley open the season with a 6-0 victory over Ridley.

Saccomandi tallied the first two goals and set up the first of two goals by Sophia Faster. Tina Rawa pitched in with two assists and Claire Yocum posted the shutout.

Sophomore Mackenzie Murray, who volunteered to move to goalie last week, held Conestoga scoreless in the first half for the Panthers and posted 10 saves overall

Liz Kurcon had a big game to pace Penncrest to a 3-1 victory over Haverford in the Central League.