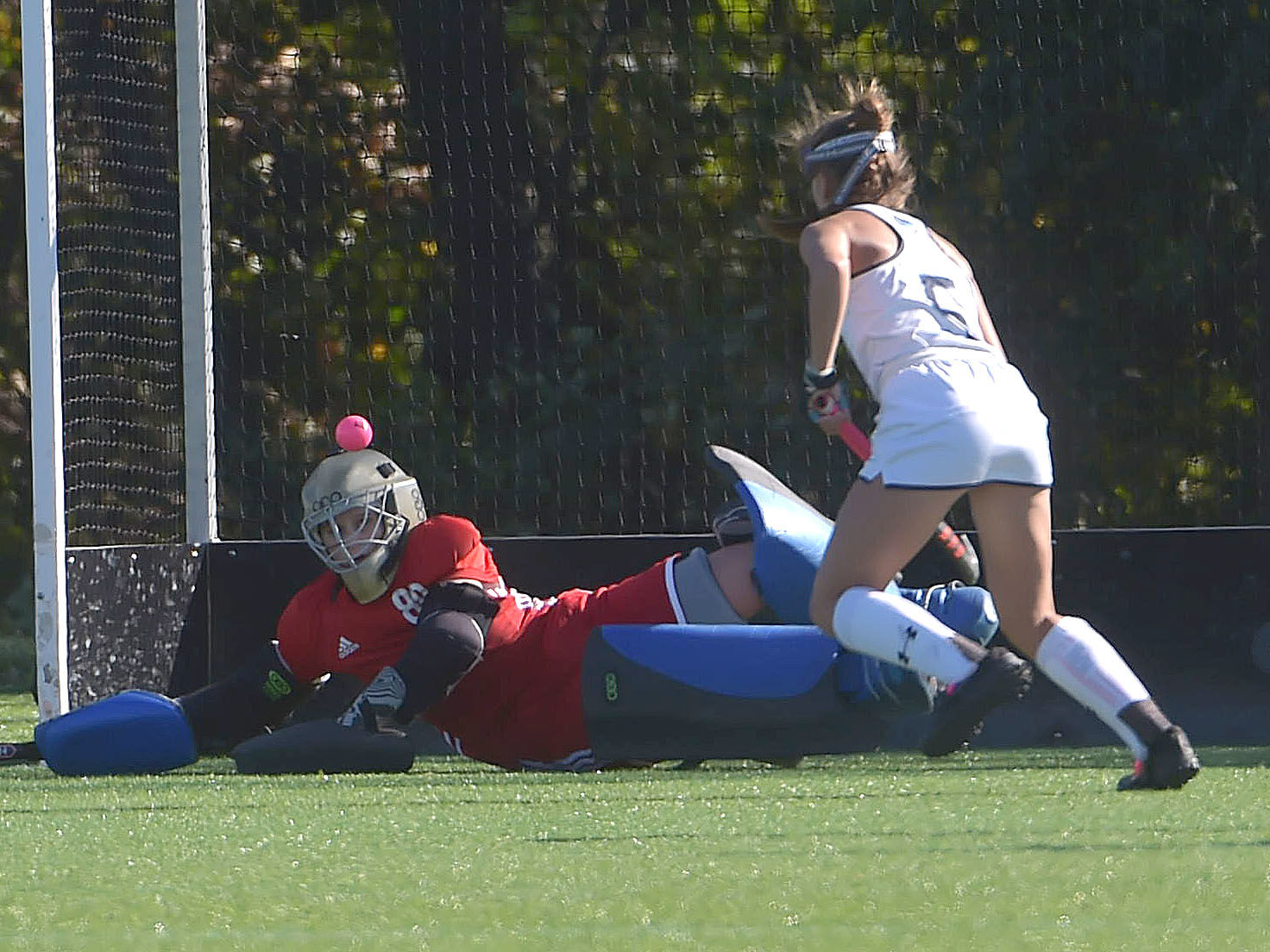 Notre Dame goalie Paige Kieft makes a save on a shot by Episcopal Academy's Ashley Sessa, right, in a regular-season meeting between the Inter-Ac rivals. Kieft, a Maryland commit, stopped 80 percent of shots this season. (Pete Bannan/MediaNews Group)

In addition to Player of the Year Kelly Smith from Episcopal Academy, the All-Delco team includes:

Barb Civitella, Radnor: An injury cut her season short, but that did not stop the Duke-bound midfielder from having an outstanding senior year. A force all over the field, Civitella possessed the speed and ball-handling skills that made her difficult to defend. A first-team All-Central selection, Civitella was the energy player that made the Raiders go. She collected 10 goals and two assists to help Radnor go 15-2 in the regular season, including a 10-1 mark in the Central League.

Paige Kieft, Notre Dame: As the last line of defense, Kieft came up big time and again for the Irish, who finished 16-6-1 and were ranked No. 12 in the state by maxfieldhockey.com. The Maryland-bound junior goalie started all 23 games, posted five shutouts and an 80 percent save rate against a national schedule that included one-goal losses to West Essex, the New Jersey Group 2 champ, and New Trier High School, the Illinois state champion.

Olivia Kingsborough, Garnet Valley: The Jaguars were one of the stingiest teams around, allowing just 0.83 goals against, and the senior was one of the reasons for that defensive prowess. She teamed with Claire Wolfe to form one of the top back lines in the area. She was the flyer on a defensive penalty-corner unit that allowed just seven goals in 100 attempts. Kingsborough also made five defensive saves to help the Jags go 21-2 overall, 18-0 in the regular season and win its first Central League championship with an 11-0 mark. A first-team All-Central League selection, Kingsborough will play lacrosse at Boston University.

Mia Leonhardt, Notre Dame: The senior midfielder/forward followed in the footsteps of such Notre Dame greats as Moira Putsch, Quinn Maguire and Lauren Curran. A dangerous offensive player, the three-time All-Delco was second on the team in goals (18) and among the state leaders in assists (21). Her ability to find open teammates was a key to Notre Dame’s success. She finished her career fourth in program history in points (227). She will continue her career for two-time defending NCAA Division I champion North Carolina.

Bridget Lowry, Radnor: Lowry teamed with Civitella to form one of the more potent midfields in the county. She helped control the tempo on both offense and defense and was a key member on offensive and defensive penalty corners. Lowry scored nine goals, including one overtime winner, and handed out five assists. She also recorded one defensive save. A first-team All-Central choice, Lowry will continue her field hockey career at Division I power Louisville.

Dana Mirigliano, Springfield: With Mirigliano leading the way, the Cougars finished 10-5-1 and 7-4 in the Central League, good for fourth place. An outstanding center mid, her ability to make the transition from defense to offense allowed her to lead Springfield in scoring the last two years and earn first-team All-Central honors both seasons. She will play both field hockey and lacrosse at Lock Haven.

Tina Rawa, Garnet Valley: As strong as the defense was, Garnet Valley’s offense was just as formidable thanks to Rawa. Just a junior, she posted 17 goals and 12 assists for a team that averaged better than four goals per game. The Drexel commit and two-time All-Central League selection came up big in the most important games. She set up Wolfe’s goal in overtime to give Garnet Valley its first trip to the PIAA tournament with a 1-0 victory over C.B. East in the playback round of the District 1 Class 3A tournament. She then scored the winning goal as the Jags topped Souderton in overtime, 1-0, in the fifth-place game.

Ashley Sessa, Episcopal Academy: Listed as a junior midfielder on the roster, Sessa played all over the field for the Churchwomen and was a difference maker whether playing on the front line, in midfield or on defense. When Smith went down in the PAISAA championship game, it was Sessa who took over. She moved from position to position and produced two goals and one assist to lead EA (20-1-1) to its second straight title and fourth since 2014 with a thrilling 4-3 victory over Hill School. Sessa finished the season with 30 goals and 13 assists to earn first-team All-Inter-Ac honors. She has committed to play field hockey for two-time defending national champion North Carolina.

Macy Szukics, Episcopal Academy: Like Sessa, Szukics was a versatile performer whose skill allowed her to play all over the field and make a difference wherever she lined up. Just a sophomore, the key member of the offensive penalty-corner unit totaled 41 points on 16 goals and nine assists to help the Churchwomen claim the Inter-Ac League and PAISAA championships. She has committed to play at Duke.

Vivi Trumpbour, Notre Dame: Trumpbour teamed with Leonhardt to form one of the most potent 1-2 punches in the area. A skilled finisher, the senior forward led the Irish with 27 goals, including six in an 8-1 victory over Catholic League champ Cardinal O’Hara. That was one of six games in which the first-team All-Inter-Ac League selection had multiple goals for the Irish. She will play collegiately at Georgetown.

Claire Wolfe, Garnet Valley: One look was all you needed to see just what a dominant player Wolfe was for the Jags from her center back position. She controlled play in front of the net and quickly turned those defensive stops into offensive opportunities. Wolfe spearheaded a defense that allowed just 19 goals in 23 games (0.83 average) and guided Garnet Valley to its best season in program history. The Jaguars went 21-2, 18-0 in the regular season, claimed their first Central League championship with an 11-0 record and earned first trip to the PIAA tournament. She had the goal in overtime to clinch the state playoff berth. Wolfe made one defensive save and scored six goals. She will play field hockey at Cornell.