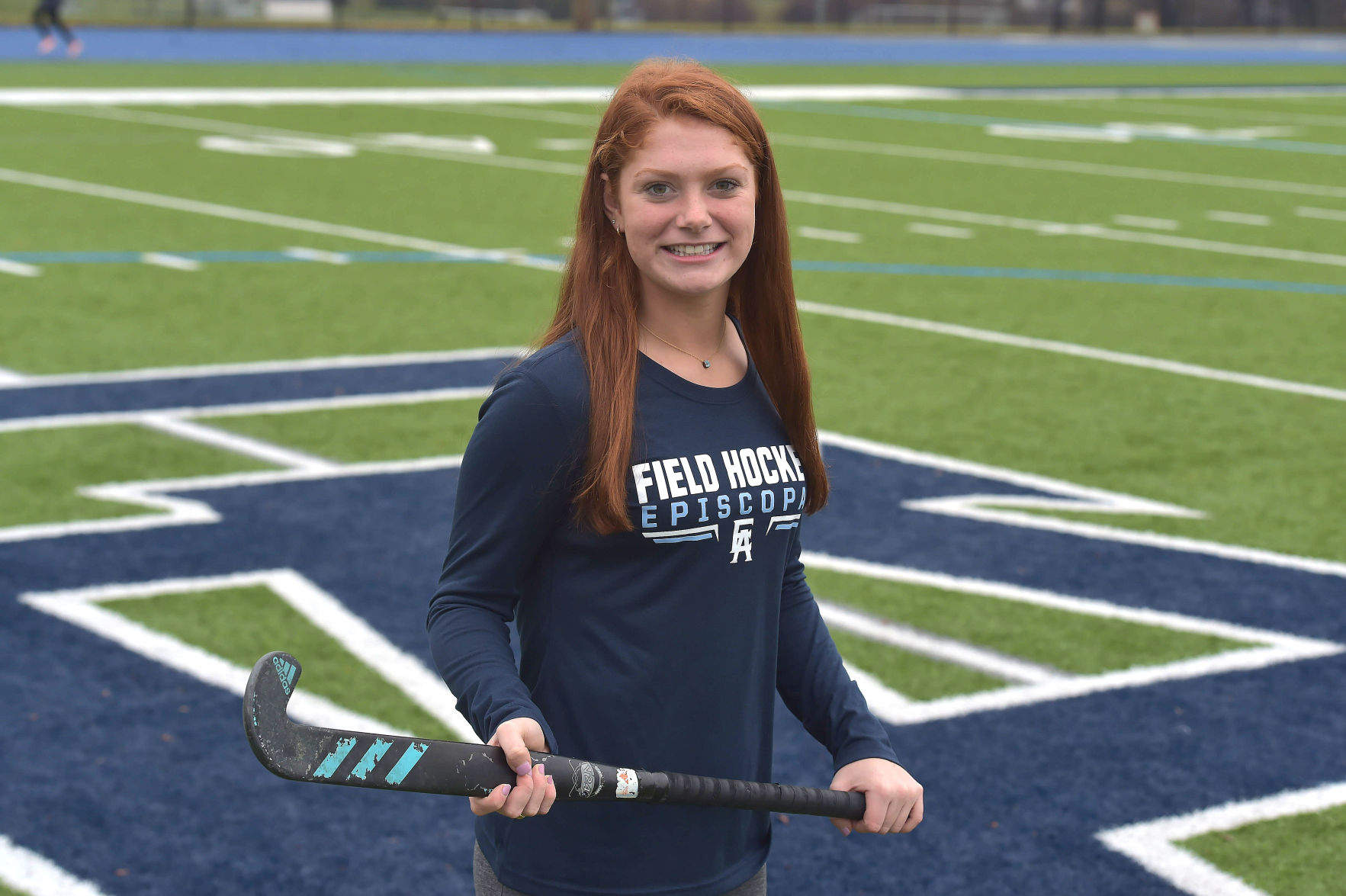 NEWTOWN SQUARE — Like a lot of younger siblings, Episcopal Academy junior Kelly Smith looked up to her old sister, Nina.

Nina was a swimmer, so naturally Kelly, who is two years younger, took up the sport.

All that changed, tough, in the third grade when Kelly picked up a field hockey stick for the first time. Even at that tender age, she knew she had found her athletic calling.

Episcopal Academy’s Kelly Smith winds up to shoot against Hill School in the PAISAA final. Though Smith would leave that game injured, the Churchwomen rallied for a 4-3 win, capping a 21-victory campaign with a PAISAA title to complement their Inter-Ac crown. (Pete Bannan/MediaNews Group)

“I just fell in love with it,” Smith said.

Smith did not give up swimming or her other sports right away. She continued to compete in swimming until her sophomore year at EA, played lacrosse as a freshman and ran track as a sophomore.

Field hockey, though, was always her main focus.

Her development into one of the top defensive players in the country took a similar path. Smith played forward and midfield before finding a home on the back line.

“Kelly not only understands defense at an elevated level, she also executes at that level,” Buggy said. “So she’s not just an athletic kid who fires after the ball. She’s very intentional as to when to tackle and how to tackle. Then her next step is always something that’s value added.

“It’s hard to teach that. She doesn’t just come up with the ball and bulldoze ahead. She recognizes where the trouble was, takes it out of the trouble and gets it to the midfield to start the attack.”

Buggy compared Smith’s defensive skills to that of two-time All-Delco Maddie Bacskai, who went on to earn All-America honors and was named Ivy League Defensive Player of the Year as a sophomore at Princeton in 2017.

Smith will take an impressive resume with her to Chapel Hill. She was named MVP of the Inter-Ac League after leading the Churchwomen to the league title. She helped EA to its second straight PAISAA championship and fourth independent schools crown in six years.

She’s also the 2019 Daily Times Player of the Year.

Leonhardt is the only repeat selection, a three-time honoree. Smith, Kieft, Sessa and Rawa are juniors. Szukics is a sophomore. The rest are seniors. The All-Delco team is selected by the Daily Times sports staff in consultation with area coaches.

Smith combined her field hockey IQ with speed and impressive physical skills to be one of the keys in EA having one of its most successful seasons in program history. The Churchwomen went 20-1-1 and 9-0-1 in the Inter-Ac to claim the league title for the 13th time. EA capped its season with a thrilling 4-3 victory over Hill School to win the PAISAA title for the fourth time since 2014.

Smith’s skills are not limited to defense. She served as the flyer on EA’s defensive penalty-corner unit and played attack on offensive penalty corners. She finished the season with 11 goals and 10 assists for 32 points.

“She’s played defense for a while so she’s cultivated those skills,” Buggy said. “A lot of kids, it takes them longer to cultivate because they’re more attack oriented or more midfield oriented. And then, to go with those defensive skills, she has midfield and forward prowess. She could be a forward. The difference is a lot of forwards could not be a defensive player or a midfielder.”

Smith credited Buggy and her club coach, Jun Kentwell, the director of coaching for WC Eagles, with helping her to develop the skills to become a top-flight defender.

“Coach Kentwell has really taught me a lot of technique, so she has been a really big part of it,” Smith said. “And Coach Buggy has taught me how to position myself better and be more of an impact on the attack by getting those defensive saves and then moving the ball forward.”

Smith’s impact was felt in the PAISAA championship game when she suffered a high ankle sprain in her right leg with 13:22 to go in the first half. It was a 1-1 game when she left. Hill School scored two minutes later to take a 2-1 lead.

“I thought we were done,” Buggy said.

The Churchwomen rallied behind their fallen teammate and roared back with three straight goals to send Buggy, who is retiring at the end of the year, out a winner, and on her birthday no less.

“It was difficult (to watch from the sideline), but I knew my team would work unselfishly and come out with the win,” Smith said.

Smith will take that same upbeat approach into her senior season when the Churchwomen will have a new coach for the first time in 30 years.

“It will be a little change, but I think she has built such a great atmosphere and team culture that we’ll do just fine,” Smith said.