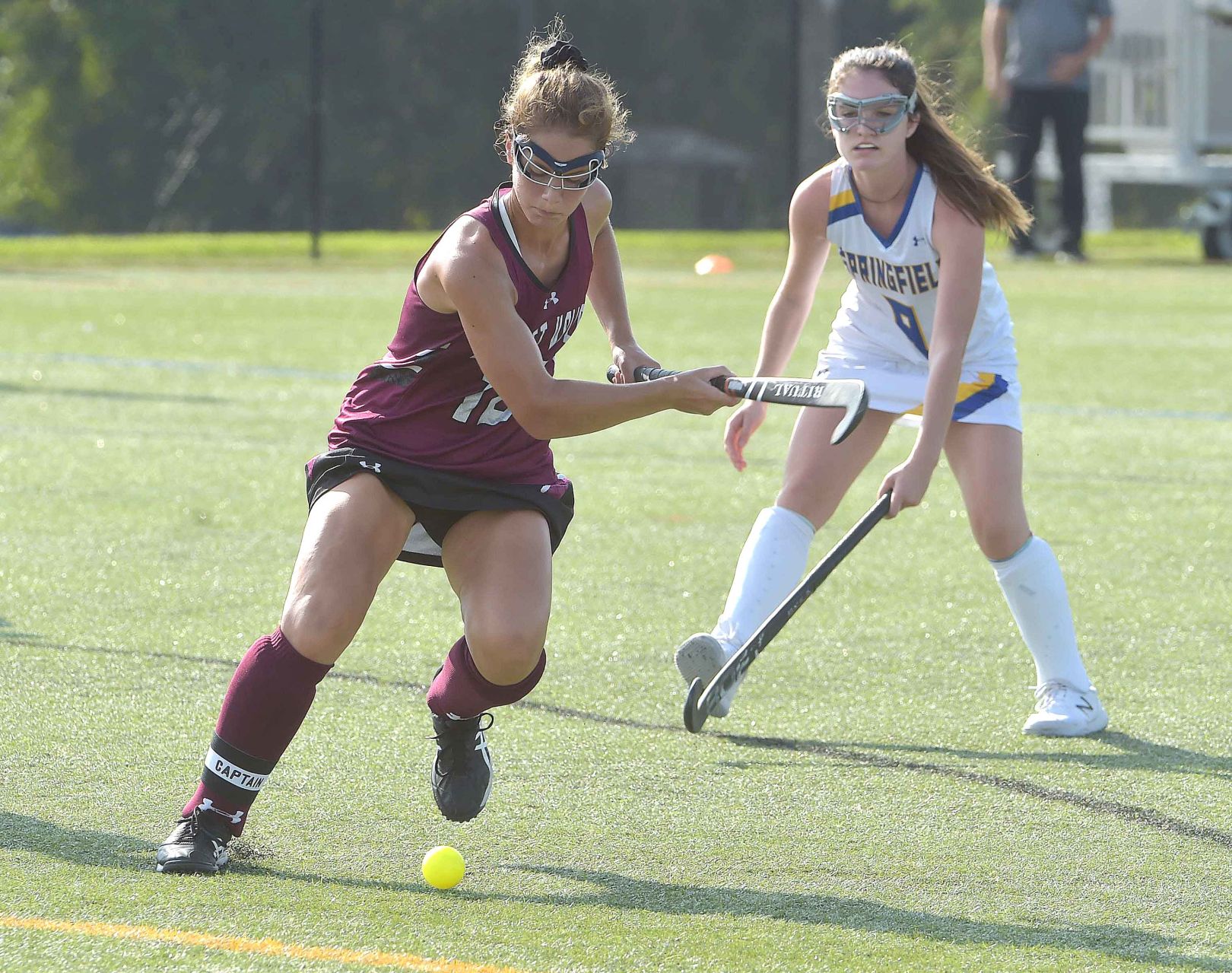 Garnet Valley's Claire Wolfe, left in this shot from a game against Springfield earlier this season, scored a goal against Central Bucks East in the district playoffs that helped the Jaguars make the PIAA tourney for the first time. (Pete Bannan/MediaNews Group)

MARPLE — As the brackets have changed and the number of classes has increased, there’s been at least one constant in the PIAA field hockey ranks: The District 12 championship in Class 3A has belonged to Cardinal O’Hara, the Lions occupying that “12-1” line each of the last eight seasons.

It’s been followed by a less laudatory fixture: Each of the last seven years, O’Hara has been knocked off in the first round of states by District 1 opposition. Some of those games have been close, with three decided by one goal. Some, like the 10-1 drubbing by Owen J. Roberts in 2017, have not.

But with the confidence of a Catholic League championship at their back, this year’s O’Hara team is hoping things will be different when the state tournament opens Tuesday, the Lions taking on District 1 fourth seed Owen J. Roberts (Proving Grounds Field 9, 5 p.m.).

“We have just been on a high,” senior midfielder Rosie DeFeo said. “We’re so excited about the win and just want to keep going. … We won and it was great, but it’s over now and we want to do something even better than that.”

That “something better” is obvious. The Lions (14-7) won their first PIAA tournament appearance back in 2008, a 2-1 decision in double-overtime against District 1 fourth seed Wissahickon. That was the Catholic League’s first year of PIAA inclusion, when there were only two classes.

A decade on, there are three classes, but O’Hara’s PIAA win quantity remains stubbornly stuck at one. Their tormentors have rotated — Wissahickon, Hatboro-Horsham, both Downingtown schools, even the eventual 2008 vanquisher, Central Bucks South, hailed from District 1 — but the results have remained the same.

O’Hara came close last year, dropping a 1-0 decision to Central Bucks East. It was a far cry from the previous year’s dispatching at OJR’s hand. Along with the Catholic League title, a 3-2 overtime win over Carroll last Monday won on Mia Scarduzio’s goal, those trends provide evidence for growth the Lions hope will finally get them over the hump.

“I think we want it much more this year and we know what we have to do this year,” DeFeo said. “And we know that we can do it, as we proved to each other in the PCL and all season, that we can do anything we put our minds to because we know each other so well and get along so.”

“I feel like we can win anything after that Carroll game,” goalie Gianna Travia said. “(Carroll) had a couple of D1 commits on their team, and I know some of their players and they’re really strong. So after beating them, I feel like we can beat a lot of other teams, too.”

The how of O’Hara’s question is important. While Scarduzio complements the high-scoring duo of Katie Shallow and Sara Grassi (both first-team All-Catholic picks), O’Hara isn’t driven by one star. Travia has had a stellar season in goal en route to All-Catholic honors, while Sami Randazzo anchors the backline behind a balanced midfield.

OJR (19-3) won’t be an easy out, as history indicates. The Wildcats were the third seed in District 1 and advanced to the semifinals, falling to Plymouth Whitemarsh, 1-0.

“This team, we have such a bond that we’ve never really had before,” DeFeo said. “We’re so close and we want the best for each other. And coming off the PCL win, we want to keep lifting each other up and keep going as a team and not stop until we have to.”

Also in the 3A tournament:

The Jaguars (21-1) head to Nazareth Area High School for a daunting, 6:30 showdown with the only undefeated team in the 3A state tournament.

Emmaus (24-0) has won 11 PIAA titles, the last in 2016, and has been to the final 15 times. The Green Hornets beat Easton to win the District 11 title for the 31st year in a row. They have outscored their opponents, 212-8, this season and have reached double digits 13 times. Emmaus is ranked 16th nationally by Max Field Hockey and No. 8 in the state.

This is the Jaguars’ first appearance in the PIAA tournament. Garnet Valley bounced back from a 7-0 loss to eventual District 1 champ Downingtown West in the quarterfinals to earn the fifth seed with back-to-back 1-0 overtime wins over CB East and Souderton. Claire Wolfe had the winner against CB East off an assist from Tina Rawa, then Rawa scored the winner against Souderton off a feed from Wolfe.

Carroll and Upper Perk square off in the first game of a doubleheader at the Proving Grounds in Conshohocken (3 p.m.).

It’s been a roller-coaster year for the Patriots (9-10). Carroll dropped a tough 3-2 decision to Cardinal O’Hara in overtime in the Catholic League championship and went 0-8 against non-Catholic League opposition.

The Indians (17-5) fell 4-3 to Merion Mercy in the District 1 championship game, which snapped an eight-game winning streak. Merion Mercy beat Carroll, 3-1, on Sept. 27.