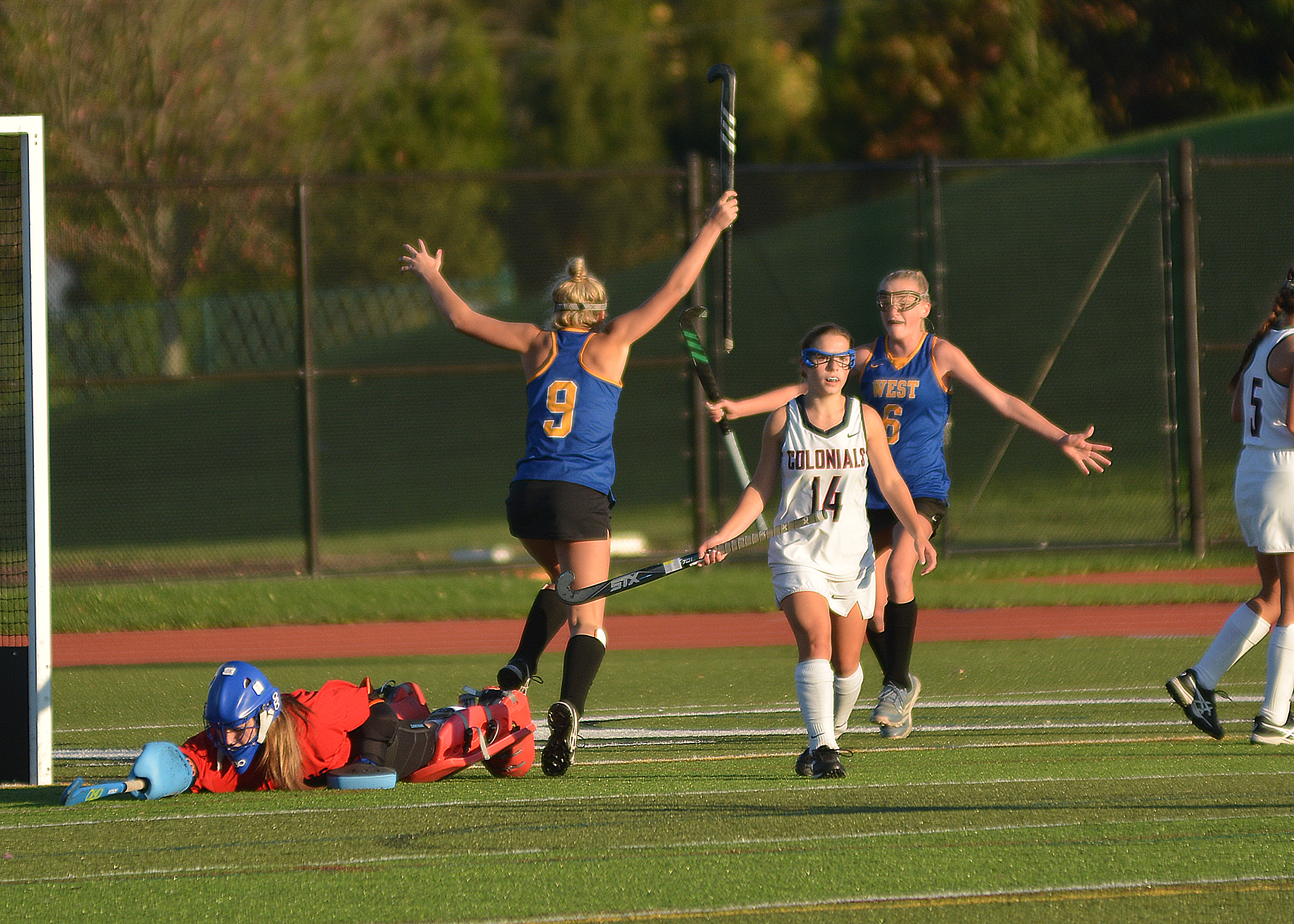 West hoists the District 1, Class 3A trophy for the second time in three years (BILL RUDICK for MediaNews Group)

EAGLEVILLE—Tatum Johnson was a sophomore starter two years ago when the Whippets last won a District 1 championship, and followed up with a trip to the state finals. But as good as it felt to win that first one, this one might just be a little sweeter.

Johnson came through with a goal in overtime Saturday afternoon at Methacton High School to complete a 3-2 comeback victory over No. 2 Plymouth-Whitemarsh, handing eighth-seeded Downingtown West (17-5) its second District title in three years.

“Last time, I think everyone expected us to win,” said Johnson. “This time, we came in as the No. 8 seed, and we took a few tough losses along the way. So I think this one might just be a little bit sweeter. But we all know that when we play the way we can, we can play with anyone.”

Johnson subbed into the 7-on-7 overtime with a little less than ten minutes left in the extra stanza, and immediately drew the attention of Colonials’ defense. Meanwhile, Ashley Plzak grabbed a ball around midfield, and took off up the right sideline, then let loose with a pass across towards the goal, where Johnson was waiting, stick down, to slip in the game-winner.

“I know when I see Ashley coming down the sideline, I better be ready with my stick pointed towards the goal, because she is going to get it to me,” said Johnson. “I don’t always have my stick pointed the right way, and miss across, but I couldn’t let that happen this time. I wasn’t positive I had gotten it, but then heard it hit off the wood , and the feeling was amazing.”

Plymouth-Whitemarsh was on the board before many of the fans had even settled back into their seats after the national anthem. Awarded a penalty corner, the Colonials’ Ava Borkowski found the back of the cage for a 1-0 lead with just 52-secconds off the clock. Borkowski had the Colonials other goal as well, making it a 2-0 game with just over ten minutes left to play.

“This is the farthest this team has gotten in a really long time,” said Colonials’ coach Beth Lynch. “This is a strong team that can win games at the state level, and hopefully playing as well as they did today and not getting the outcome will serve as motivation come Tuesday and the first round of states.”

Few teams have kept the Whippets off the board for as long as Plymouth-Whitemarsh had. West had entered the championship game with 17 goals in three post-season wins, outscoring the opposition 17-2 in that span.

“For as many corners as they had, our defense did a good job of keeping them out of the cage,” said Lynch. “I was really proud of the girls in the back. Kayla Link has been solid all year and goalie Sarah Trask came up with some big saves. They did a nice job of turning lemons into lemonade, keeping them off the board but allowing so many corners.”

But the Whippets have been in that position before, both this season, and the last time they were in a championship game and fell behind Conestoga 2-0 before coming back to win 3-2. So no panic, just get to work.

The Whippets kept that corner pressure up, finally getting on the board when Plzak converted a corner with 7:05 to play.

“None of us were too worried,” said the freshman Plzak. “We talked in the huddle, and we all knew we could do it. We knew there was still fight in us, and we even talked in practice the other day about how the last time we were here we fell behind 2-0.”

Plzak came up with the tying goal as well, converting a corner with 2:31 to play.

“Ashley has been big for us all season, and has been great in transitioning the ball,” said West coach Steph Bullock. “We have a number of young players that have come through for us.. We played well today, but we’ve got to play through possessions and finish. As we move on and face stronger opponents, we are going to have to be able to finish.”

Up next for the Whippets is a first round match in the PIAA tourney against, Central Dauphin the fourth-place finisher from District 3, back at Methacton, Tuesday November 5, at 6 PM.  The Colonials will have a first round match-up against Easton, the District 11 runner-up, at Wissahickon at 5PM Tuesday.