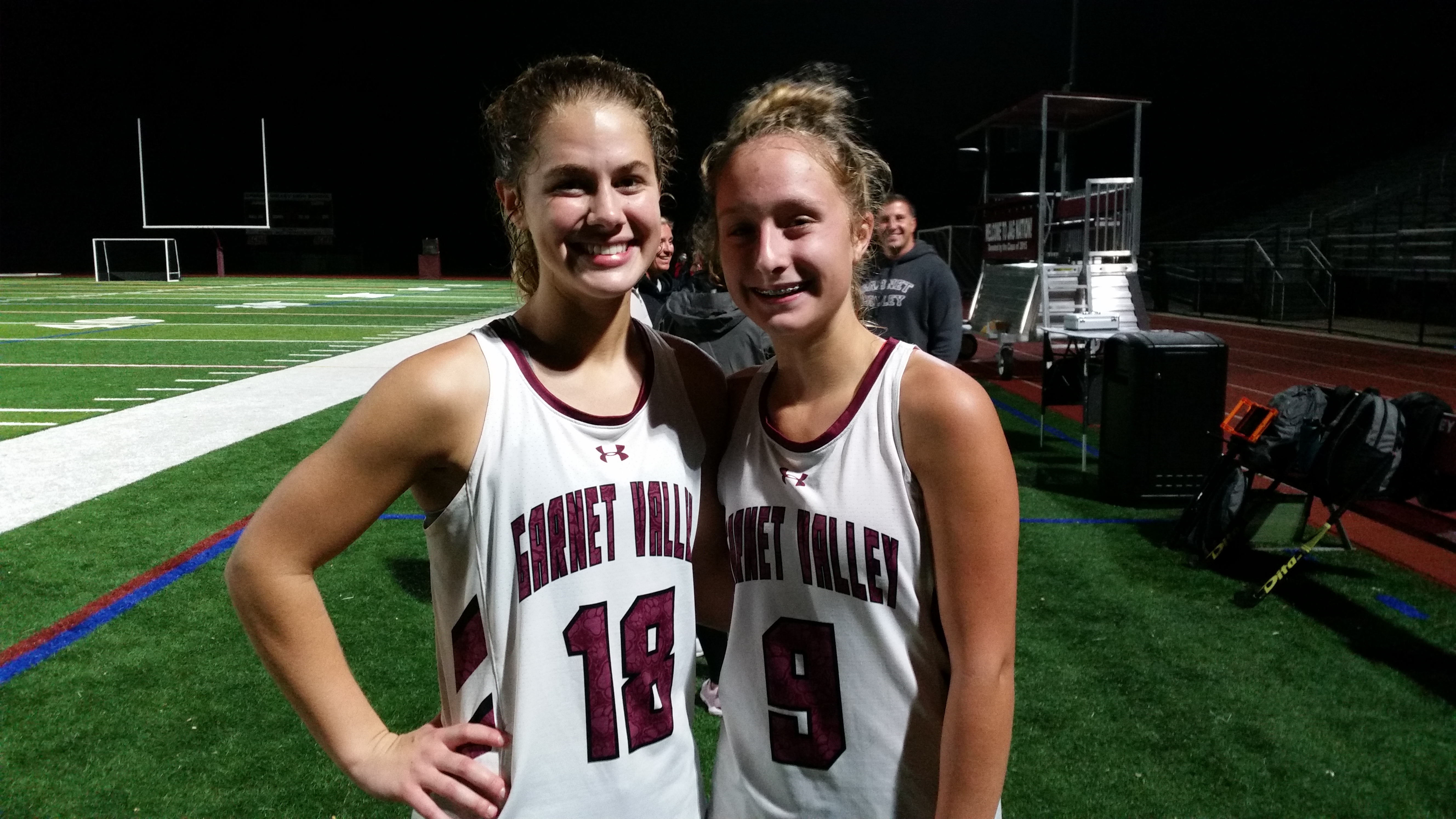 Senior Claire Wolfe, left, and junior Tina Rawa teamed up for the winning goal in overtime to give Garnet Valley a 1-0 victory over Central Bucks East Tuesday. (DFM photo)

CONCORD – The corner did not go as planned, yet no one at Garnet Valley is complaining this morning. It worked, that’s all that matters and the Jaguars are headed to the PIAA Class 4A field hockey tournament because of it.

Senior Claire Wolfe converted a pass from junior Tina Rawa off a corner 1:39 into overtime to lift the top-seeded Jaguars to a 1-0 victory over fifth-seeded Central Bucks East in a fifth-place playback thriller at Moe Defrank Stadium Tuesday night.

Wolfe’s goal, the first overtime score of her career, deflected off of the stick of a CB East defender to clinch what is believed to be the first state playoff berth in program history. Garnet Valley (20-1) will be back at home Friday afternoon (3:45) to take on sixth-seeded Souderton in the fifth-place game. The Indians knocked off No. 10 Council Rock South, 2-1, to earn a trip to the Moe.

“I wasn’t expecting to take the shot and all throughout warmups my shots were off so I was nervous,” Wolfe said. “But I knew that as soon as I got the ball that this was our one opportunity to score and I had to do it.”

There was a reason for that confusion. Four players are taken off the field in overtime and one, for Garnet Valley, was Sophie Easter, who is usually the insert on corners. With Easter on the sideline, that job fell to junior Mary Rose Berry.

Berry was supposed to insert the ball to Wolfe, who would then feed it to Rawa for a shot on goal, but the play went the other way. Berry passed to Rawa, who found Wolfe at the top of the circle. Wolfe let go a one-timer and the celebration was on.

“I was supposed to be practicing the inserts, but I’m also a post player (on corners) so I’ve been practicing the post because that’s one of the more important jobs,” Berry said. “That’s where Tina and Claire hit the ball so I never got the chance to practice my inserts so when they said it was a 23 I just hit it right in between them and Tina ended up getting it to Claire, thank goodness.”

No one on the team cared that the play did not go as planned. The result is what mattered.

“It worked out for us really well,” Rawa said. “I was so happy that I started crying. It was so exciting. It was unreal.”

Goalie Maura Greek came up with three save in the second half to help force overtime. The defense also came up with a save at the post to keep the Patriots off the board. East’s defense came up big, too, especially goalie Emily Bullard. She had five saves including a huge stop on Kendall DiCamillo with a little over 11 minutes to play in regulation to keep the game scoreless.

It would not stay that way in overtime thanks to a play that did not go quite the way it was designed, but worked out to be historic for a senior class that went from being 3-15 as freshman to making the stte tournament for the first time in program history.

“It means everything to make states,” Rawa said. “Going into the season I never would have thought that we would get here, but as a team we bonded so well, worked so well together, especially in this game. We wanted it so much and we were able to make it happen.”