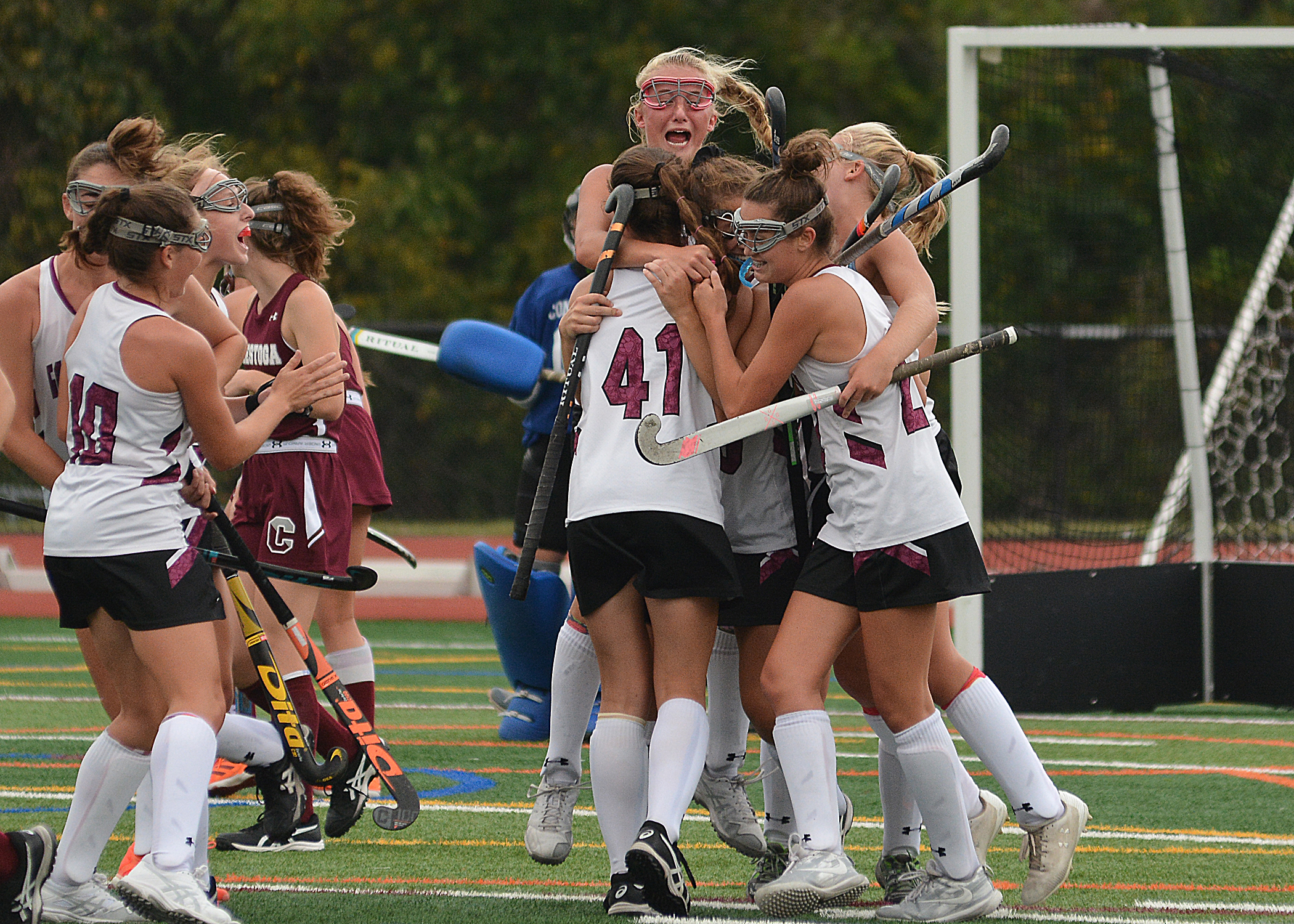 Garnet Valley celebrates a first-half goal by Kayla Snyder, the only marker in a win over Conestoga Thursday. (Bill Rudick/For MediaNews Group)

CONCORD — It’s always important to do your homework.

Coming into Thursday’s field hockey game against Conestoga, Garnet Valley was riding a 10-game unbeaten streak and was looking to top the Pioneers for the first time in nearly a decade. The Jaguars, ranked second in District 1 Class 3A, are hoping to end Conestoga’s stranglehold on the Central League.

So they scouted Conestoga, and scouted some more, looking for any edge they could find.

It worked. The Jags played impenetrable defense and made a Kayla Snyder goal stand up as the game winner, 1-0, to improve to 11-0 on the season.

“We really did our homework on Conestoga,” Jags coach Sandy Leitisaid. “We kind of had an idea what to expect — we had an idea of how they would pressure offensively, how they approached their defensive corners, and we practiced those scenarios. The girls really executed and this was a big win for us.”

In the last minute of an even first half, the Jaguars forced a penalty corner. Kiley Gallagher put the ball in play on the insert, sending it to Snyder at the top of the circle. Snyder drifted to her right and unleashed a shot through a crowd, just past the extended leg of goalie Katie Clemson and into the wood on the left hand side of the cage.

“We have been practicing that corner a lot, and I’d been having trouble keeping the shot down,” Snyder said. “But I got the ball, and gave it a shot. It felt great when it went in — it was really important for us to take the lead into halftime. We were nervous coming in, but we’re also confident in ourselves and believed we could get this win.”

Springfield 4, Lower Merion 2 >> Eliza Donaldson scored a pair of goals while Dana Mirigliano and Arden Turner had one apiece for Springfield.

Marple Newtown 2, Ridley 1 >> Olivia Eversole and Kylie Gioia had a goal each for the Tigers.

Krista Geibler put one in the back of the net, and Jordan Polillo made four saves for the Green Raiders.

Academy Park 2, Interboro 1 >> Amy Dao scored the game-winning goal with 9:33 left in overtime, and Sanyia McLendon had the lone goal of the first half for the Knights.

Victoria Smith tied the game up for the Bucs with 2:35 remaining in regulation, and Gab MacDonald made seven saves.

New Hope-Solebury 4, Delco Christian 0 >> Rachel Yeung made seven saves for the Knights, who trailed 2-0 at halftime and couldn’t recover.