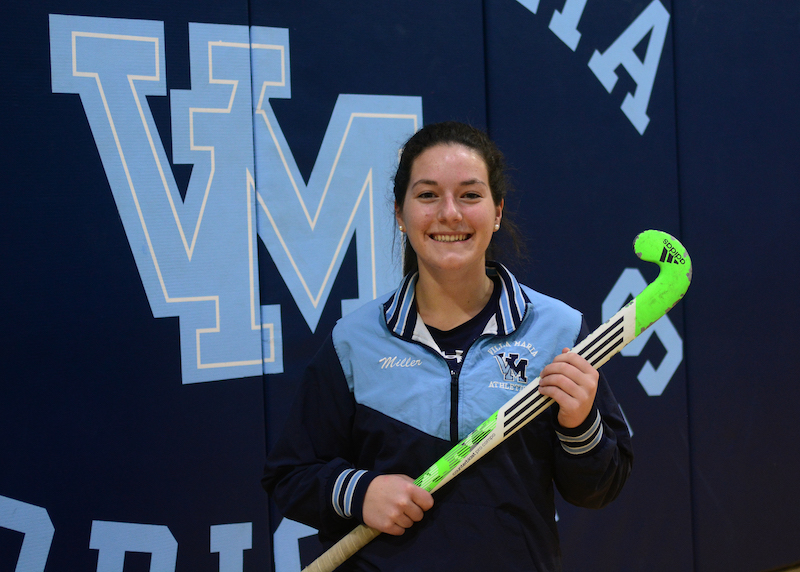 Early in the season, Hannah Miller was scoring at such a high rate that the nickname “hat trick Hannah” was underselling things a bit.  And though the pace slowed as the season went on, Miller still led a Villa Maria team that scored 6.9 goals per game, a mark that topped all of Southeastern Pennsylvania.

Miller finished the season with 46 goals, representing 31-percent of the Hurricane team total, and dished out a team-high 21 assists as well, while leading to Villa to its seemingly annual District championship, while earning personal honors as the 2018 Daily Local News Field Hockey Player of the Year.

“We believe we could have gone further than we did, but it was still a great season,” said Miller.  “We all enjoyed playing together, and winning another district title.  We all learned a lot and just had a great time playing.”

Prior to this season, Miller had only played high school hockey under coach Daan Polders.  But when Polders relocated to North Carolina, in stepped Villa-alum Katie Evans to take the reins.

“Right from the start, Katie was setting up transitions for us,” said Miller.  “She made it very easy for us to adjust.”

Miller always seems to come up big when the stakes are at their highest, or in the tightest games.

“I’ve been playing field hockey a long time,” said Miller.  “All that experience allows me to know what kind of level of play I have to bring.  I love the intensity of the close games.  I thrive on the competition, because I just love the game.”

One commonality among great athletes is that they are never satisfied with their level of play, always seeking to improve at least some aspect of their game.  For Miller, this year that was getting better on defense.  Normally a forward, as the season moved on Miller got moved back to midfield more often, and presented a whole new set of challenges.

“I am definitely working to improve my defense,” said Miller.  “My natural position is forward, but I just like playing field hockey, no matter what position.  I want to have the versatility to be able to play well anywhere.”

With an eye towards an eventual career in medicine, Miller will be taking her talents to Duke University next year, where she will major in biology or another related field.

Though her high school career is now behind her, other than her time with WC Eagles or making the u-19 national team, Miller has plenty of memories she’ll carry with her forever, not the least of which was Villa’s state championship run a year ago.

“That was just such a great season,” said Miller. “To win the state championship by a single goal was amazing.  They way we gelled as a team and rallied to win a state title for Daan in his last year here was something that will always hold a special place in my heart.”