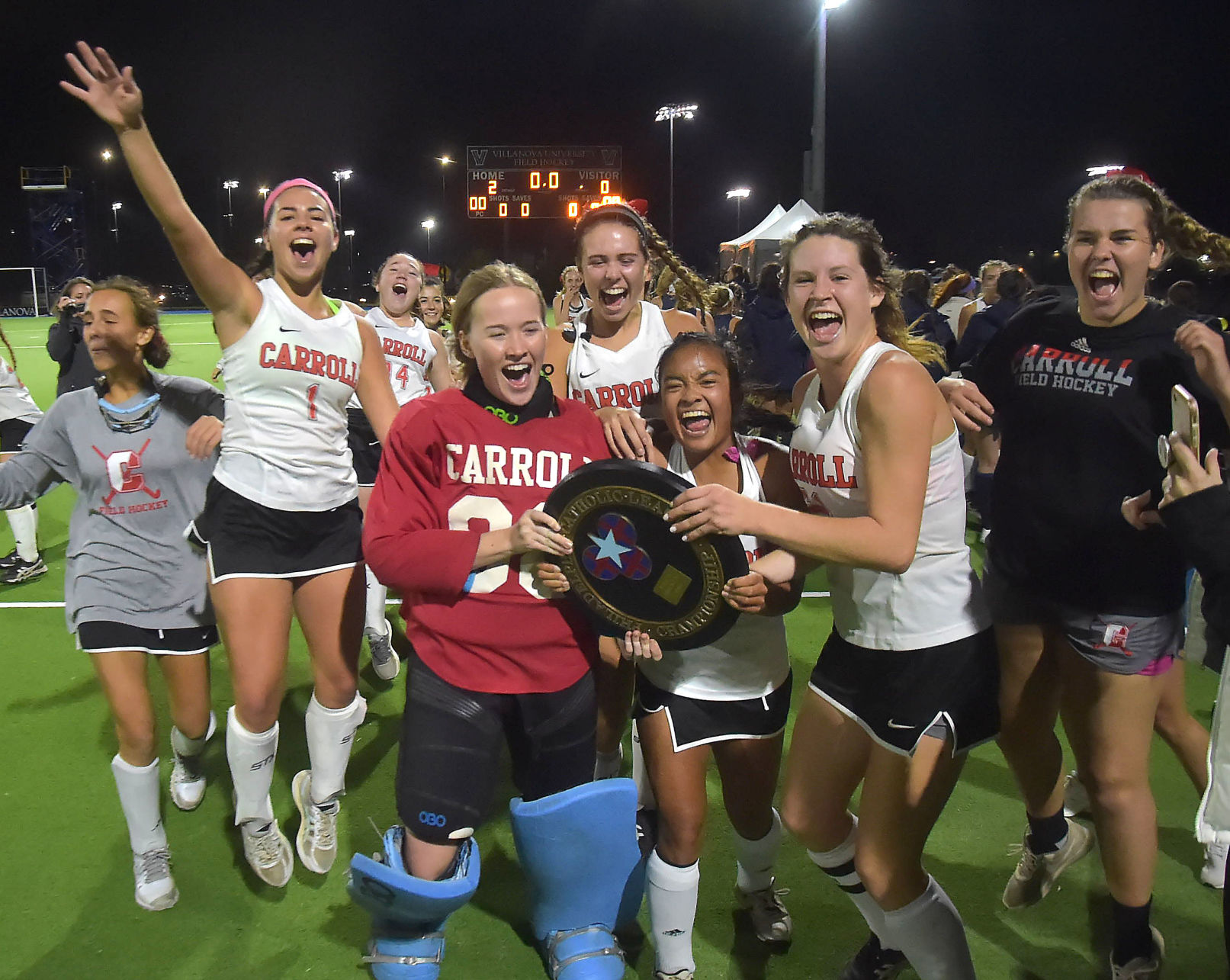 Carroll, which kept qualifying for the PCL final but had not come away with the large plaque signifying success in the final playoff game since 2014, put all those numbers in the past with its 2-0 victory over Cardinal O’Hara in the Catholic League title match at Villanova University’s field at the Proving Grounds Thursday night.

Archbishop Carroll’s Katie Labella, right, moves the ball upfield in the first half as Cardinal O’Hara’s Emily Raech defends Thursday evening at the Proving Grounds in Conshohocken. Labella had the game-winning goal in the Patriots 2-0 victory over Cardinal O’Hara. (Pete Bannan/Digital First Media)

A year ago, it was a Bonner & Prendie goal 17 seconds before the end of the second half that led to overtime, and a goal in the extra period that gave the Pandas the decision over Carroll.

“We don’t have to talk about that again,” a happy Carroll head coach Christina Elisio said. “It’s time to move on.”

Both teams will move on to Benjamin Johnston Memorial Stadium in North Philadelphia Saturday to play in the District 12 title contests. Carroll will compete for the Class 2A crown and O’Hara will take part in the Class 3A final.

Senior Katie Labella scored late in the first half and junior Megan Curry tallied in the fifth minute of the second half Thursday night for the Patriots (16-4), who did not lose to a Catholic League opponent this season, including a 1-0 overtime decision over the Lions (11-7) during the regular season.

“She’s just the best goalie ever,” said Bateman, a Media resident who stepped up to the top of the scoring circle to thwart O’Hara’s final penalty corner just before the Pats and their fans went into celebration mode. “Our defense has been the key to our team, and tonight we all worked well together.”

Both teams worked at frustrating the other through 26 minutes of the first half before Labella put in the first goal.

“There was a shot that was saved,” she said. “Then I got the chance and put the ball in. We knew O’Hara was a good team and we’d really have to work hard the whole game.

“Knowing what happened to us here last year has pushed us all this year to get back here and to win it.”

Curry admitted she had the chance to do something in the game that was a big part of the preparation for Thursday’s matchup.

“We’ve really worked at practice to try to redirect the ball (into the cage),” she said. “I just happened to be in the right spot at the right time.

“When it got close to the end of the game, we knew the last few minutes were going to seem to take so long.”

Junior Katie Shallow applied pressure at midfield and in the attack zone for O’Hara, but the Lions were unable to get the ball past Kearney for the second time this season.

“We were more focused tonight,” Elisio said. “I could tell we were ready. We worked well together. Our stick to stick passing was good, and we worked in layers, with our midfield stopping them or if they couldn’t, our defense would come up big.”

Carly Spaeder, an O’Hara All-Delco who played at Rider University, was disappointed with the result but was determined to move on at practice Friday.

“Carroll’s had a great season and they played a good game tonight,” Spaeder said. “We don’t have a lot of seniors. What we have are people who play with their hearts.

“Now we have to get ready for districts and try to go on as far as we can in states.”