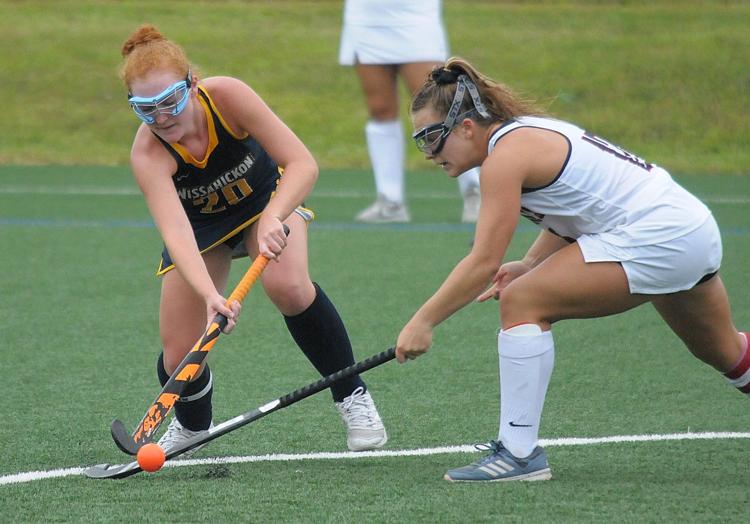 WHITEMARSH >> Plymouth Whitemarsh entered Tuesday’s game against Wissahickon with an undefeated record, but the team struggled with penalty corners during the early stages of the season.

That weakness turned into a strength against the Trojans. The Colonials scored three goals off penalty corners to highlight a 5-0 Suburban One League American Conference win at Plymouth Whitemarsh High School.

The Colonials (3-0, 2-0) three goals set up by corners were the first three goals of the game.

Senior Kennedy Reardon tallied the first just over 10 minutes into the game. Kayla Link sent the insert pass to Reardon, who forwarded it to Sam Spera. Spera fought off a couple Trojans to get the ball back to Reardon, who smacked it into the back of the cage for a 1-0 lead.

Reardon scored again to make it 2-0 with 5:29 remaining in the first half. The Colonials kept the ball close to the cage after the initial corner play was blocked and Reardon was in position to bury the rebound.

“We definitely worked on our inserts a lot with the last couple days practicing,” Reardon said. “It’s definitely been one of our main priorities at practice to work on just because we haven’t been too consistent on our new surface and such, but I think we’re getting the hang of it.”

Hailey Copestick scored the third goal of the game. Similar to Reardon’s second, the intended corner play was stopped by Wissahickon but PW continued to apply pressure. Copestick found her way to the ball and made it a commanding 3-0 lead and forced the Trojans to take a timeout.

Wissahickon’s Grace Ball uses her body to shied the ball away from Plymouth Whitemarsh’s Sam Spera during their game on Tuesday, Sept. 11, 2018. (Gene Walsh/Digital First Media)

“We kept tackling from behind and causing corners,” Wiss coach Lucy Gil said. “That’s something we’re going to work on in our practices. (Corners haven’t) been a problem.”

Kaleigh Missimer scored the final two goals of the game. The first came courtesy of a spinning pass from Ava Borkowski and the second off a rebound when the goalie came out from the cage.

The Trojans (1-1, 1-1) managed just four shots on net in the game while PW dominated possession and the pace of play.

“We really did not expect this game to go like this,” Gil said. “I think the slowness of the turf really threw us and we stopped moving after a while. It looked like they kept moving and we weren’t moving. That’s what happens. We have a lot to work on.”

Wissahickon goaltenders Meghan Reilly and Alli Wood made plays in the cage to keep the score from getting out of hand. Reilly had six saves and Wood totaled 11.

“The goalies are definitely a bright spot,” Gil said. “And I gave Alena (Doll) the game ball — my left-back. She did a great job. Their forwards are really fast and good and she stopped her (assignment) every single time.”