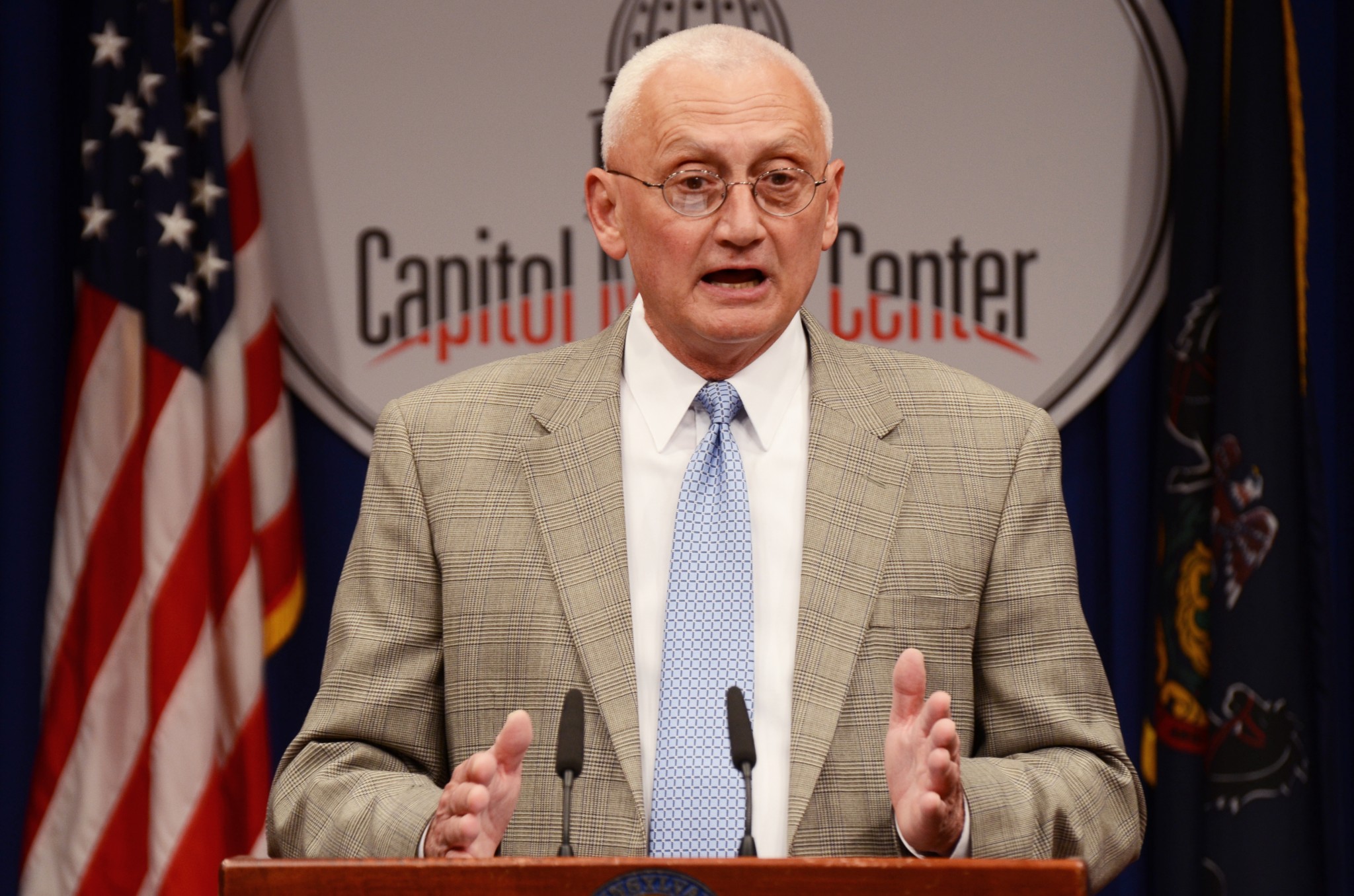 State Rep. Gene DiGirolamo, R-18, of Bensalem, is one of the members of the Pennsylvania Athletic Oversight Committee who took part in Monday’s “Hearing on Public, Private Sports” in Harrisburg.

HARRISBURG >> It was about an hour into a meeting in the bowels of the K. Leroy Irvis Building before the ill-fitting title of the committee meeting was broached.

“I’ve yet to hear anyone advocate that,” said State Sen. Scott Martin, R-13 of Lancaster.

The title of Monday’s meeting of the Pennsylvania Athletic Oversight Committee was a “Hearing on Public, Private Sports.” The subject that many public-school stakeholders want to discuss, separate championships for public and private schools, isn’t about to happen anytime soon.

But that fact doesn’t preclude progress on the issue of competitive imbalance, and the tone of optimism Monday indicates that it could be on the way sooner rather than later.

Public and private championships in a state of the size and sensibility of Pennsylvania are a non-starter. The mere terminology is prohibitively impenetrable: Monday’s meeting included Sean McAleer, executive director of the Pennsylvania Catholic Conference, calling the distinction of boundary/non-boundary “a legal fiction,” while the testimony of PIAA executive director Dr. Robert Lombardi sought to cleave his body’s membership into “traditional schools” and “schools of choice.” It was a minor point in the proceedings, but rest assured that any attempt to put weight behind those terms would meet harsh rebuke. (It is worth noting that one PAOC member, State. Rep. Robert Matzie, D-16 of Ambridge, seemed open to revisiting the state’s Public School Code to bring definitions into the 21st century, but such an effort is away from fruition and pertinent for reasons that extend far beyond athletics). Separate tournaments would require the imprimatur of the legislature to rejigger a law on the books since 1972 that stipulates the PIAA treat all members — public and private, religious and secular — uniformly, and legal progress on anything that big in Harrisburg is a herculean task.

But those facts don’t necessitate stagnation, and the PIAA can make progress if it shows the will to tweak its structures.

READ: Our four-part series on the Public/Private debate in Pennsylvania

Really look at the flashpoints. The distal complaint is about the number of championships won by private schools, exemplified in a stat shared by State Sen. Jay Costa, D-43 of Pittsburgh, that shows non-boundary schools toting a 279-111 record against boundary counterparts in contests from 2016-18.

But the proximal concern is the nebulous charge of, “they’re not playing by the same rules.”

So the PIAA is trying to toughen the rules. It’s implemented a mandatory 21-day waiting period for in-season transfers and barred athletes who’ve played 50 percent or more of the PIAA maximum games at a non-PIAA school from hopping into the middle of a PIAA season. It’s put more teeth into the transfer waiver request form, beefing up documentation requirements and asking more of the principal of the sending school. It could bar athletes who transfer after ninth grade from playoff participation in the first year. Perhaps the biggest change, currently tied into the “Competition Classification Formula” that’s working its way through the bureaucratic pipeline, is the formation of a centralized compliance committee that can adjudicate disputes and apply rules evenly statewide.

Even if the radical reshaping in that formula via success factors and transfer numbers doesn’t eventually cross the finish line, the PIAA has taken steps to get its members in order.

To the cynical view, it’s a clever workaround that seeks to circumvent past prohibitions on legislating championships. To the more hopeful, it targets root causes. Even Martin, the newest member of the oversight committee and a state champion wrestler at Lancaster Catholic, supported that the spirit of these proposals focused on “individual schools rather than a type of school.”

McAleer has been a staunch defender of private (or non-boundary, or school of choice) rights. But even he and the PCC were in accord with many recent moves — including transfer transparency, the in-season waiting period, the 50 percent rule and the competition formula.

What the PIAA has done in its recent action is seek a middle ground. It’s issued the challenge to non-public schools that have always argued that they’re playing by the rules to prove it: By having the same players in ninth grade and 12th grade, by not showing up for the playoffs with out-of-state ringers, by not taxiing in squads of developed upperclassmen from other schools.

The PIAA is charting a course between treacherous and opposing viewpoints. It isn’t indiscriminately punishing private schools, even those with no history of athletic success or malfeasance. It also isn’t cowing to public schools’ desire for amnesty from private-school dominance — the rules as structured also bar the transfers that public schools benefit from, of residents who don’t make the cut at private schools and return home for their junior and senior seasons.

Neither of those extremes — of the nefarious, scheming private schools and the bullying, public behemoths — is 100 percent accurate. Neither view is sustainable as a guiding mythos for an organization as expansive as the PIAA. And neither view holds the opportunities afforded to students as the most important factor, which State Rep. Gene DiGirolamo, R-18 of Bensalem, reminded everyone in attendance was the ultimate point.

The rules aren’t perfect and might never be. In a state whose politics are dominated by conservatives, there’s something about taxing athletic success that seems unlikely to be popular. Punishing transfers after ninth grade would seem to intensify schools’ recruiting efforts (not that any recruit, of course) in middle schools, until that becomes untenable and the PIAA has to drop the mallet again in the perpetual game of whack-a-mole.

What the PIAA is doing is taking affirmative steps to address a problem. And with the sense of possibility in the room Monday and as the organization heads into what could be a pivotal summer of self-inventory, that’s more than can be said in the past.