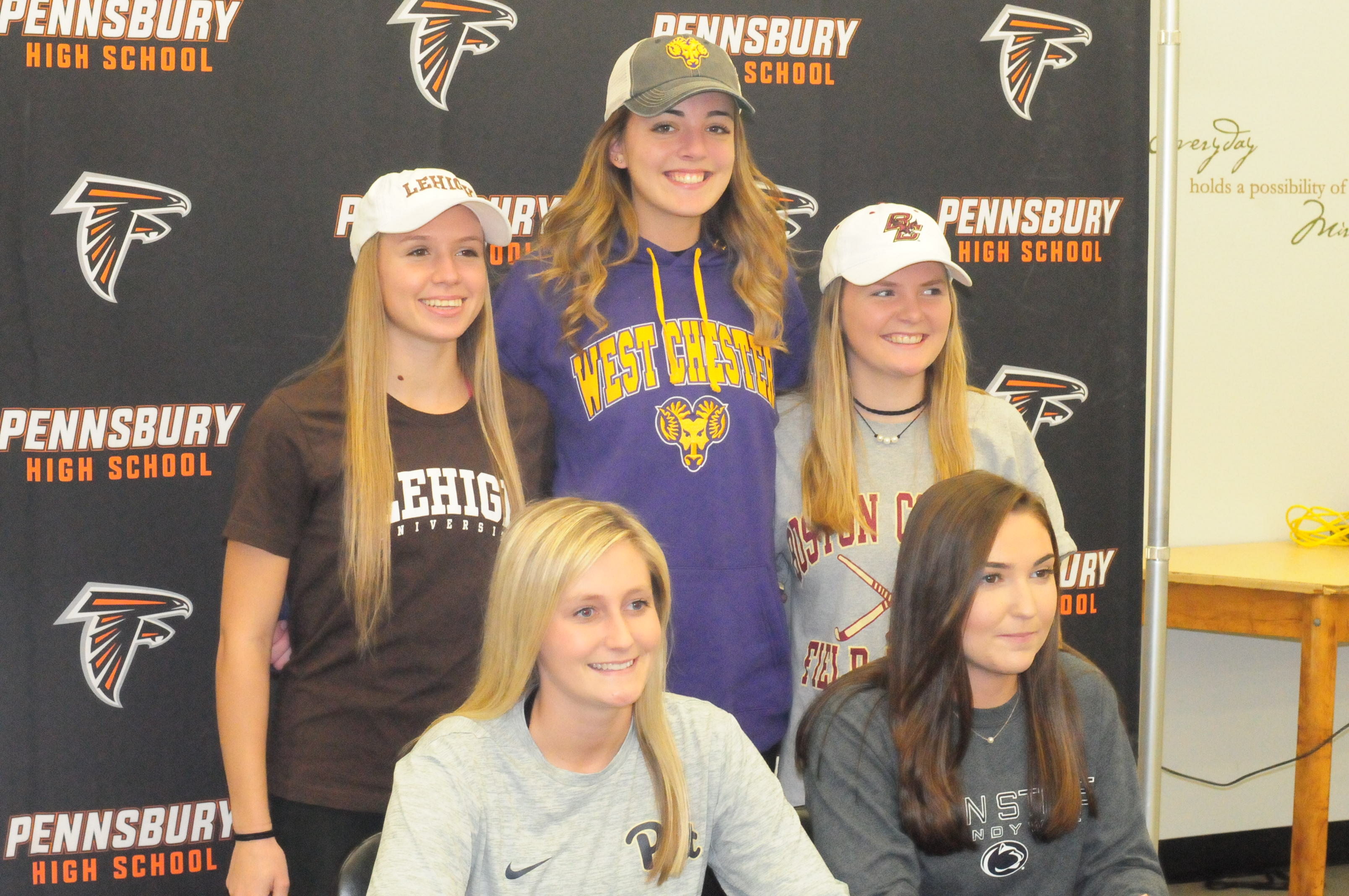 FALLS TWP. – Pennsbury field hockey recently finished an unbeaten season, its first in the program’s history. The performance helped the Lady Falcons claim their first Suburban One National League (SONL) trophy all to themselves since 1992.

The campaign turned in by Pennsbury provided plenty of excitement for all 12 seniors on the squad.

Still, it wasn’t enough to change Maddie Hackman’s mind. The senior midfielder will run track at Lehigh University this time next year. Today (Nov. 16) on the PHS West Campus, Hackman was one of five Pennsbury seniors who committed to college athletics in multiple sports.

Two years ago as a sophomore, Hackman had the privilege of running with the likes of Class of 2016 grads Bailey Balmer (Texas), Olivia Sargent (Virginia), Maddie Sauer (Manhattan College) and Meridith Twomey (St. Joseph’s).

“When I was a freshman and sophomore, I was kind of choosing (between field hockey and track),” explained Hackman. “I just saw how great it was to compete with such amazing runners.

“The seniors that I was with were just incredible … and I just wanted to follow in their footsteps.

“And that’s when I decided.”

A sprinter, Hackman captured first place in both the 100- and the 200-meter dash at the SONL track & field meet last spring. She considered Tulane and William & Mary but selected Lehigh as the place where she will continue both her academic and athletic career.

“Lehigh has a perfect balance of everything I wanted,” said Hackman. “It’s not too close, it’s not too far; it’s a great school with a great atmosphere.

“I just fell in love with it.”

Hackman likes the balance between academics and athletics at Lehigh.

Still, she had a lot of fun playing field hockey this fall. Who wouldn’t? The Falcons posted 15 wins overall while going unbeaten (12-0) in the SOL National Conference.

“This year, we had such an awesome group of girls. And we were all really great friends. We supported each other through everything.

“I feel like that’s really why we did so well. Nobody ever got mad at each other.

“I’ve never had a team like that; it was really amazing.”

What was amazing was how Pennsbury turned a 6-6 team into a 12-0 squad in one season. Unfortunately, the Falcons, after earning a first-round bye in districts, drew ninth-seeded Unionville, a team that finished third in the tournament last year before going to states.

Pennsbury gave the Indians a run for their money, even taking a 3-2 lead on a goal by Kate Chesney with eight and a half minutes remaining in regulation only to see Unionville draw even with 3:48 to go in the second half. After no one scored in the first overtime, the Indians finally ended it with a golden goal more than 86 minutes into the contest.

“We all just wanted it so bad, we all just poured our hearts into it,” said Hackman. “We had nothing to lose. We went in with everything we had and that’s why we played so well.

“In the end, we all tried our best. Even though we lost, we were all so proud of ourselves.

“This season was like a dream of mine,” added classmate Nell Webber. “To win SOLs then go undefeated was even better.”

With 12 seniors returning to the lineup, Webber says many onlookers believed the Falcons would have a special season before it even began.

“Our starting lineup was basically the same,” added Webber. “And we had a strong core of our team coming back so we knew it was going to be a good season.”

Webber wants the fun to continue in field hockey. That’s one reason why she’s chosen to continue playing the sport at Boston College.

A two-year captain, Webber was recently named a Philadelphia Senior All-Star by Philafieldhockey.com, a website that promotes high school, college, club and youth field hockey in the Philadelphia region.

The Pennsbury senior was a three-time all-league selection, notching 34 goals and 32 assists in her four-year career. She was also a National Futures Championship and Junior Olympics selection.

Webber will join 2017 Council Rock South graduate Caroline McGovern when she arrives in Chestnut Hill. In 19 games (9 starts) this past season for the Eagles, McGovern recorded three goals and three assists including the game-winner in the team’s 2-1 double overtime triumph at Albany and the opening goal in Boston’s 2-1 victory over Maryland on the Eagles’ home turf.

“It’s going to be cool to know that someone, kind of from home, is going to be there,” said Webber, who only met Caroline on an official visit to BC a month ago.

“She played a lot as a freshman and made a big impact on the fourth line.”

Webber is hoping to repeat that feat after she arrives in Beantown.

Before making her final decision, Nell also considered Penn, Yale, Northeastern, Lehigh and Lafayette. She says she chose Boston College because she wanted to play in the prestigious Atlantic Coast Conference (ACC) against the likes of Virginia, Duke, Wake Forest, North Carolina, et.al.

She also thinks it’s her best chance to play in the NCAA Tournament.

And that’s not a stretch.

While BC failed to make it to The Dance this year, skipper Kelly Doton is the first coach in program history to lead the Eagles to NCAA Tournament appearances in each of her first two seasons (2015, 2016) at the helm.