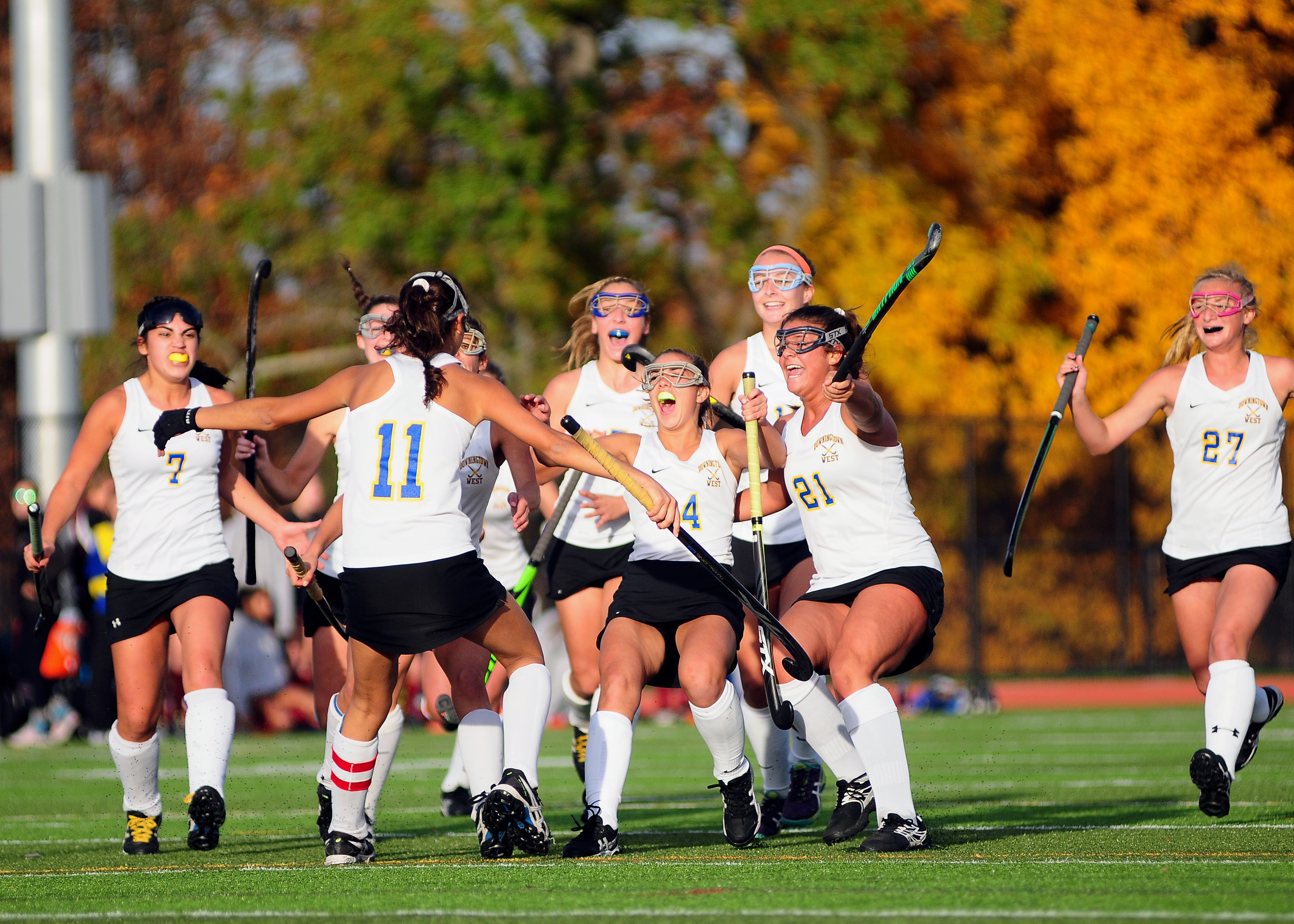 WORCESTER >> For once, Conestoga and Downingtown West played a field hockey game that didn’t need overtime to determine a winner, like the last three meetings did. But that didn’t mean Saturday’s District 1, Class AAA championship game at Methacton HS was lacking in excitement.

Conestoga and West put on a show, with the Pioneers (18-4) jumping out to an early lead, and the Whippets closing it out with three unanswered goals. The final score came with just over two minutes to play in regulation and capped a 3-2 West win that earned the Whippets (22-0) the first district championship in program history.

The Whippets will now face Manheim Township, the fourth place finisher from District 3, in the opening round of the PIAA tournament. The game is scheduled for Tuesday at West Chester East, with a game time of 4 PM.

“It’s an amazing feeling and such an incredible accomplishment for the girls,” said West coach Liz Bradley. “It’s something they will all remember twenty years from now. We couldn’t be more proud of them for getting here and finishing what they started.”

For the start, the action was fast paced on both ends of the field, and the two teams combined to force eight penalty corners over the first eight minutes. The Whippets held an edge in possession; forcing eleven first half corners to the Pioneers’ four. But it was Conestoga that was able to capitalize on the early opportunities.

Just about seven minutes in, Conestoga broke the stalemate, converting on a corner with Char deVries assisting on a goal from Emma McGillis. The Pioneers bumped the lead to 2-0 when Kiley Allen let loose a bullet from the top of the circle.

“It was a little frustrating that we weren’t taking advantage of all those opportunities,” said Bradley. “At the same time, we were doing a good job in attacking and forcing the corners, and we were getting off some good shots. You had to think eventually something would get in.”

West finally got on the board late in the half, when Taylor Orsi sent a ball inside the circle and Tatum Johnson drove it home to cut the ‘Stoga lead in half, and made it 2-1 at the break.

“We tried to change up our corner defenses as much as we could,” said Conestoga coach Kerry deVries. “We tried not to be too predictable.”

Romea Riccardo, who connected on a penalty stroke to put eh Whippets ahead in their semi-final game, was called on once again. Riccardo went low and to Conestoga goalie Ali Showers’ right, and when it banged off the back wood, it was a tie game.

“Just getting that stroke gave us new life,” said Riccardo. “It’s a whole new game when it’s 2-2 than when you are chasing down 2-1. I just knew I had to put it in.”

With the game tied, the Pioneers stepped up their attack, and put a ton of pressure on the West backs and goalie Catilyn Coker. ‘Stoga got off several hard shots, but Coker was more than up to the task, and kept the Pioneers out of the cage the rest of the way. Coker finished the night with six saves, three of which came down the stretch.

“I started getting a lot of shots on me, but the backs and the mids, and me, we all just did whatever we could to get the ball out of the circle,” said Coker. “We just needed to work together to get the win.”

West put the game away with a goal with 2:40 left in regulation when Riccardo hit a bullet into the back of the cage.

“It’s an amazing feeling to win a district championship,” said Riccardo. “We are going to celebrate this, and we couldn’t be any happier. But we’ll be ready to play again Tuesday with the start of states.”

Up next for Conestoga is a return trip to Methacton High School, for their first round match-up with Easton, with a game time of 4PM.

“Anytime you play a team like Downingtown West, you become a better team,” said deVries. “Anytime you lose a heartbreaker in a district final, it is going to affect you. And it’s good to feel a little anger. But we have to channel that in a positive way as we move on to states. This is a great group, and I think it’s a team that can really do something in states.”