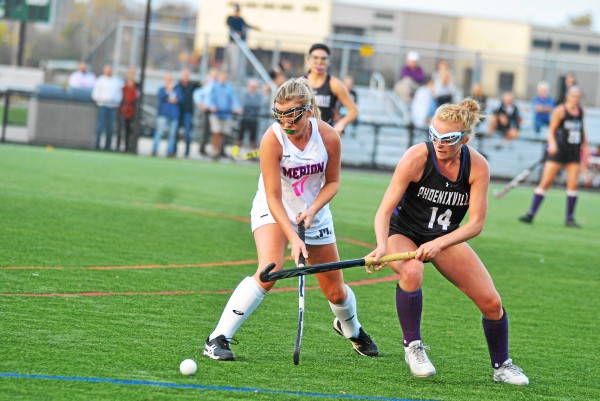 Lavelle tallied at the 17:35 mark, with an assist by Katie Murphy on a penalty corner. Carlin’s goal came at the 5:14 mark.

The Golden Bears, the defending district Class 2A champions who are now 16-5-1, thus extended their season and will advance to the state tournament. Phoenixville saw its outstanding season under first-year head coach Claire Emplit come to a close at 14-9 overall.

A brilliant outing by senior goalkeeper Tyler Hall, who recorded 20 saves, and the rest of the Phoenixville defense enabled the Phantoms to hang tough throughout. Many of Hall’s saves were marvelous dives against difficult shots on goal from close range by Merion Mercy.

“Defense was a big part of the game,” said Russo. “Our players on defense, we defended well. We were marking up and stepping up to the ball.”

After their long journey a year ago to the district title and states, Merion Mercy did not want to see its season end here in the fifth-place game for 2017.

“It is a big part of our mentality to be ready on defense, no matter what,” McClatchy said. “It was a really good game. We all knew it was all on the line for our season.”

Emplit was still extremely proud of how her Phantoms from the Pioneer Athletic Conference Frontier Division performed in the pressure situation and throughout the campaign.

Hall had to stand tall because Merion Mercy outshot Phoenixville, 22-5, with the aid of 10 penalty corners to just two for the Phantoms.

“(The season) was a strong one,” Hall said. “Tonight I did my best to keep us in the game. We kept our composure. It was an excellent job by our defense. I definitely couldn’t have played as well if it wasn’t for them. Everybody stepped up. It is amazing we got so far.”

Speedy junior forward Ameerah Green kept the pressure on attack at the other end of the field with a number of rushes, but Phoenixville just could not get enough shots off and find the back of the cage against the Merion Mercy defense.

“We new coming in that this was do-or-die,” said Emplit. “We really were optimistic about qualifying for states. It was a high level of play. We showed we can compete at a higher level. We played the whole game really well with Merion Mercy.

“It was a very impressive year. I’m very proud of the girls. They worked hard from the first day all the way through to today. They are very coachable.”

Because of that, Emplit said she was able to make adjustments in strategy that the Phantoms responded to and put into practice on the field.