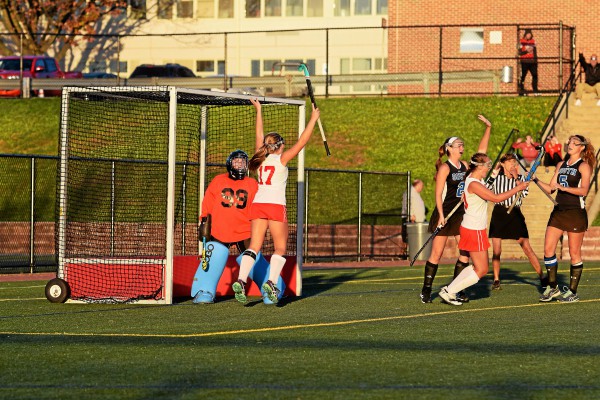 BUCKTOWN >> Echoes and cheers of her name may still be ringing off the hills of Owen J. Roberts High School.

OJR senior defender Riley Hansen delivered the game-winning goal 11 minutes into the overtime period Friday afternoon to lift the Wildcats past Central Bucks South 2-1 in the quarterfinals of the District 1 Class 3A playoffs, securing OJR a place in next month’s PIAA playoffs.

“I saw the ball bouncing around, and it felt like just about everyone got a touch on it,” said Hansen, who scored it from the left side of the cage with 3:27 left in the overtime period. “We knew that it would come down to a play like that – the ball was just bouncing around out front and someone needed to put one final touch on it.”

Head coach Amy Hoffman was quick to note, the final sequence wasn’t at all drawn up. She gave her players the free rein to feel it out in front of the cage. It was a complete 180-turn from the team’s approach the first few weeks of the season.

“We just kind of said to them, ‘Receive it and send it, try and make something happen,’” recalled Hoffman. “A lot of times, they are most successful when they just play.

“In the beginning of the year, we used to have set plays and numbers and things, but they just thought too much about all of it. So now we just let them send it in and do what they see.”

The win not only secures No.  7-seeded OJR (16-6) a spot in states – their first trip since 2015 – but also sends them to the District One Class AAA semifinal where they’ll face No. 3 Conestoga next Tuesday. Central Bucks South (17-8-1), the No. 15 seed, drops to the playback round where they’ll face No. 11 North Penn as four teams will be vying for two spots at states.

Hoffman and her team took a much preferred route to punching their state playoff berth, rather than dropping into the unpredictable playback round.

“It feels really good to know that we’re in,” she said. “We don’t have to worry about the stress of, ‘Do we make it, do we not make it?’ Now we’re just gonna keep playing, go as far as we can in districts.”

Owen J. Roberts’ senior forward Bridget Guinan opened up the scoring 13 minutes in by capping her team’s third corner try as she tipped in a pass from Julia Lamb. For virtually the next 30 minutes of play, OJR was in complete control.

After the halftime, the Wildcats kept the Titans out of the scoring circle the first 14 minutes. Then, Megan Gillard capped South’s second corner try of the afternoon with a rocket from the left side to even it up at 1-1 with 13:58 remaining.

“When we match up with teams that play a little bit different of a style than us, we always struggle for some part of the game,” said Hoffman. “They (Central Bucks South) play a much different style than we’re used to. It definitely hit us in the middle of the game.”

OJR made one final push as regulation came to a close. The Wildcats were awarded a corner try as time expired, then forced another, which was shut down by the South defense as they cleared it out of the circle and pushed overtime.

In the overtime period, South was making its pushes, especially early on. Five minutes into the period, Casey Reilly went on a breakaway toward the OJR cage with no one but keeper Cassie Mickelsavage in front. Mickelsavage stepped out of the cage, knocked the ball away from Reilly to keep OJR in the game and keep her team’s state playoff hopes intact.

New Hope-Solebury wins District 1-A championship over Gwynedd Mercy
Mayer, Lower Moreland too much for Springfield-Montco, takes 3rd in District 1-A
Loading Comments...