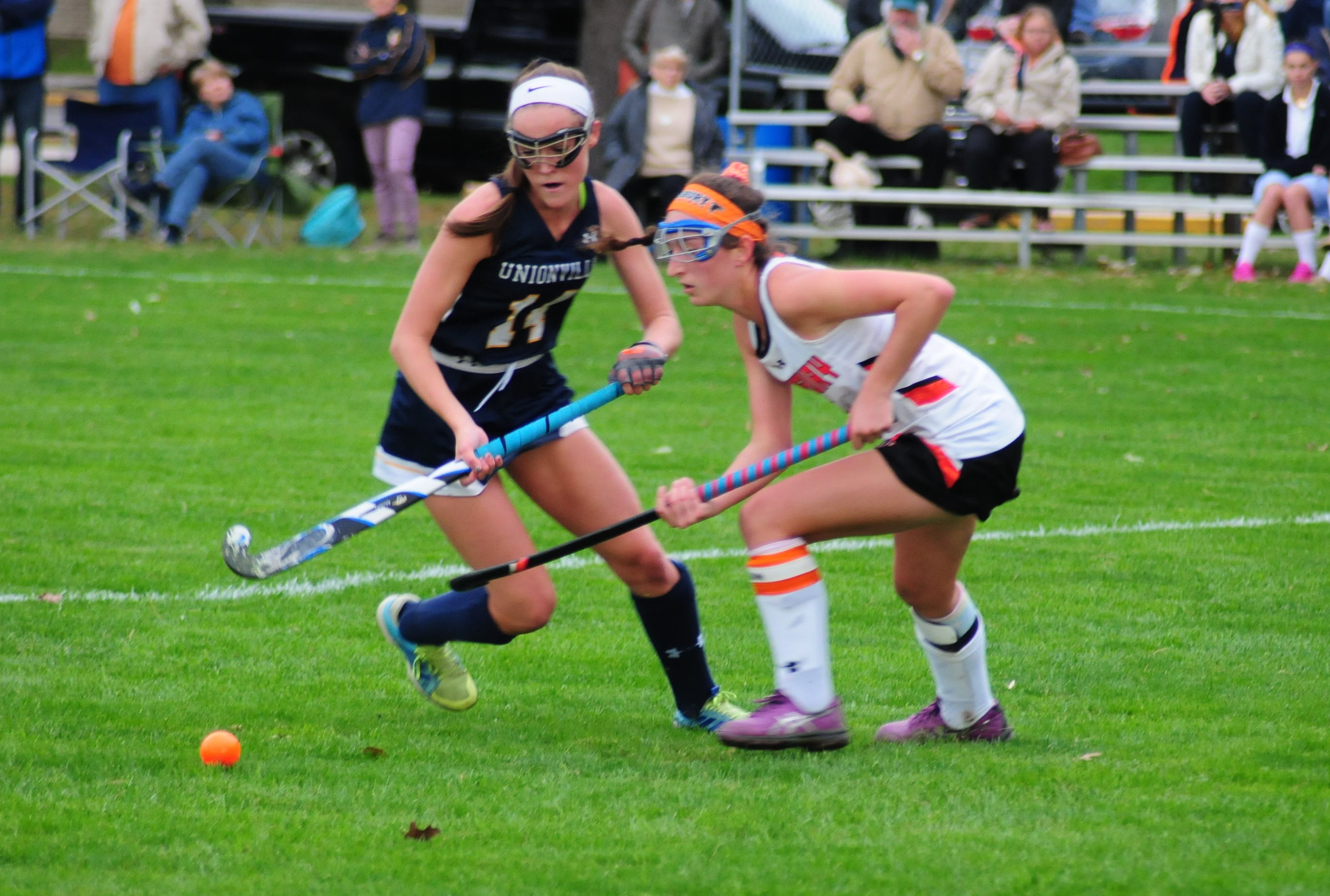 FALLS TWP. – Pennsbury gave everything it had in its District 1-AAAA opener against ninth-seeded Unionville and somehow came up short Wednesday afternoon (Oct. 25) on the Falcons’ home field.

With a double overtime goal by senior Claire Donovan off a tip of a feed from classmate Annie McDonough, the Ches-Mont American Division champs extended their season into at least the district quarterfinals, where they will face top-seeded Downingtown West, a 7-0 winner over 16th-seeded Council Rock South.

“We played our hearts out – to lose in double overtime, if you’re going to lose, that’s the way to lose,” said Pennsbury head coach Jamie Parell.

“We had a couple of letdowns here and there; one of our downfalls – we talked about it at halftime – was corners. They dominated us in corners, for sure.”

Visiting Unionville outshot the Falcons 25-7 and out-cornered the home team, 24-8 including a 9-1 edge posted by the Indians in the first half.

Battling back from 1-0 and 2-1 deficits, Suburban One National League Champion Pennsbury actually went ahead 3-2 with 8:39 remaining in regulation on a tip-in by senior Kate Chesney of a shot by classmate Nell Webber.

That lead would not hold however, as Unionville senior Katie Anderson scored unassisted on a blast from the left side of the circle with 3:48 remaining in the second half that drew the visitors even at 3-all.

While no one tallied in the first extra session, Donovan tipped a feed from McDonough into the back of the cage with just 3:24 showing in the second overtime period to end the Falcons’ season at 15-4.

Pennsbury senior Sammie Hackman registered a pair of goals for the Falcons, scoring once to tie the score at 1-all with 3:56 remaining in the first half. And with Pennsbury trailing 2-1 after the intermission, Hackman helped draw the sides even when she tipped in a shot by Kate Chesney, just 34 seconds after Maggie Lawrence gave the Indians a briefly held second-half lead.

“It’s always frustrating when you’re tied but we knew we were still in it and we knew we had to keep going and we couldn’t worry about where we were,” said Unionville head coach Erin Curtis.

“At the end of the day, we needed the win and we pulled it off.

“It was frustrating for us to come to a district playoff game and have to play on grass, because most games are played on turf and we’re usually very much a finesse team, and that’s the surface that we’re most used to.

“We really had to fight out there and I’m just so proud of the girls for fighting as hard as they could.”

After drawing the sides even at 3-all, the Indians made a strong push to get the go-ahead strike in the last three minutes, 45 seconds. Anderson’s shot on Unionville’s final corner in regulation was deflected by Gianna Pinto, however. Pinto, Annie Price, Nell Webber and Amy Ronin did a nice job covering the Indian attackers in the final moments and in the overtime periods.

Shocking Unionville’s system was the play of Hackman, who practically took the ball end-to-end to tie the score in the closing minutes of the first half and repeated the feat mere seconds after the Indians took a 2-1 lead midway through the second.

“We answered right away,” said Sammie’s younger sister Maddie Hackman. “Once they shot and scored, that just fired us up and we went right back after them.”

Time and again however, McDonough – who is committed to the University of Virginia and gave Unionville its first lead when she converted on a feed from her twin sister Maddie 16:55 into the first half – pushed the ball up the field and netted corner opportunities for the visitors. The Indians outcornered the Falcons 6-1 in the first overtime and 4-0 in the second extra session.

“We got tired towards the end but we played so hard,” said Maddie Hackman. “We played as hard as we possibly could. Even though we were tired, we were still pushing it with everything we had.”