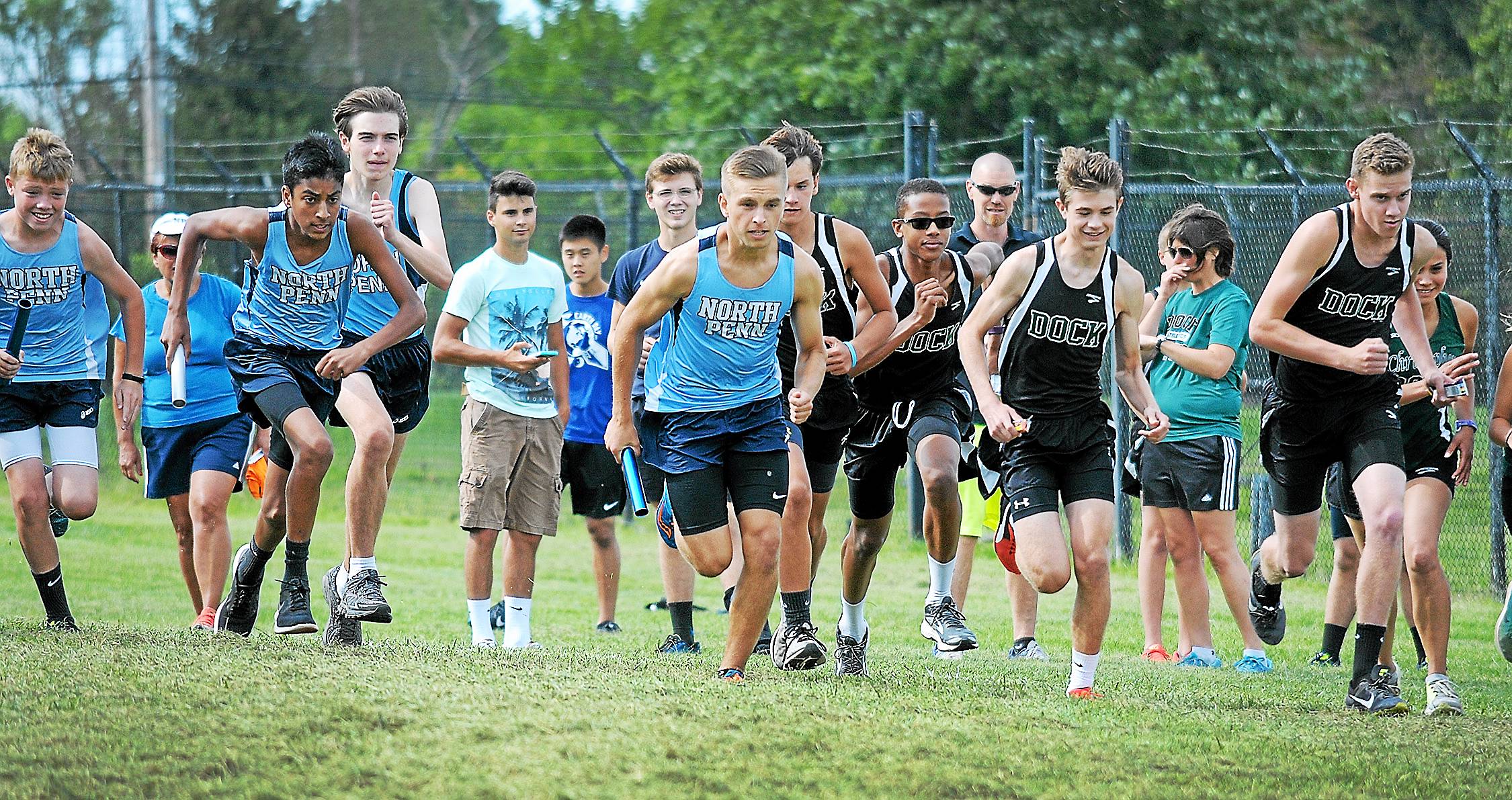 Runners take off at the start of cross country meet at North Penn on Monday, Aug. 28, 2017. (Gene Walsh/Digital First Media)

With two of the top three finishers from last year’s Suburban One League Continental race returning this fall, the North Penn girls have a tough pack to crack.

Those two seniors — Ariana Gardizy and Olivia Dyer — lead the way for the defending conference champs, with plenty of competition on their heels.

“CB East and CB West will be the two strongest teams in our conference this year with Pennridge, Souderton, and CB South also in the mix,” said Knights coach Jim Crawford Jr., in his 43rd year guiding the program. “We have a lot of experience, but must remain injury free in order to have a chance.

“We have some newcomers with potential, who, we hope, will contribute to our team effort as the season progresses. Only four of the top 10 individual finishers from the 2016 Continental Conference Championship race return this year, but that includes the first three finishers in the race — Ariana (first), Souderton’s Emily Bonaventure (second), Olivia — and four in the top 10 — CB East’s Cameron Billingsley was eighth.”

In a stacked conference, the Bucks will also be tough to beat.

“Expectations remain high and the outlook is positive,” coach Kiki Bell said. “The girls’ work ethic over the summer has been evident in these early practices and our goal is to stay healthy and focused while having a lot of fun.”

Another team that has set high standards year after year is the La Salle boys, beasts of the Philadelphia Catholic League and a states contender every season.

“We’ve used our depth and tight spreads to finish in the top five in the state the last two years,” coach Greg Bielecki said. “The challenge this year if we are to take the next step, is can we slide our guys up into challenging for state medals. “(Evan) Addison is ready for a big year, but who will step up behind him and how close can the rest of the pack stay? If the team stays committed to the process it should be a fun and exciting year.”

Dock is always a team to be counted on when the big races come around in late October.

“We have a lot of returning four-year runners so there is plenty of experience,” Pioneers coach Justin Feil said. “We also have a nice group of new runners this year that will help add depth to the program. We will need our pack to improve steadily throughout the season to contend for BAL and District 1 championships.”

Methacton may be on the brink of something in the Pioneer Athletic Conference.

“After coming off a fourth-place finish in the conference, the boys team looks to improve,” Warriors coach Steve Savitz said. “The team is young and fast led my sophomore Matt Varghese. Matt finished the season running a 16:36 as a freshman at districts and has been working hard ever since.

“He is followed by a strong varsity team containing Tommy Chimes, Garrett Campbell, Myles Hovan, Garrett McPhillips, Will Rebert, Sean Ritchie and Jack Kapralick, who all have the ability to break 17 minutes this year. The team is practicing hard and will make an impression this year.”

Meanwhile there’s something brewing over at Lansdale Catholic.

“It is exciting to have such a young team to work with, coupled with a few quality-character upper classmen that we have at LC,” coach Matt Connelly said. “This will be a refreshing new start for our program. The goal for this season will be to get our younger runners adjusted to the high school distance and the accompanying training to be successful.

“We have three new invitationals this year, to look forward to for the season. We’ll open the season at the Bulldog Invitational in Media, followed by Six Flags Wild Safari in New Jersey. Our third invite will be at William Tennent. These meets will give our team some exposure to races that will get us ready for the post season, with the goal of getting as many kids to earn a trip to states.”

Here are some other area teams to watch this season:

BOYS
Abington Friends
Coach: Kyle Rankin (second season).
Last year’s record: 1-4 Friends Schools League.
Key returners: Chase Balick, Jr.; Toby Avery, So.
Coach’s outlook for the season: “We’ve made enormous strides over the past 18 months — AFS athletes have combined to establish 13 school records. The boys team is going to be very young and inexperienced. I don’t anticipate having any seniors on the boys team. Our focus has been, and will continue to be, on building our program with an eye on the future. There will be ups and downs just as there were last year but I am excited about where we are heading.”

Hatboro-Horsham
Coach: D.J. Fromal (first season).
Last year’s record: 5-1 SOL American; second in conference.
Key performers lost: Johnny Metzgar; Brendan Quinn.
Key returners: Jared Bixler, Sr.; Gio Cerisier, Sr.; Dylan Hontz, Jr.; Kyle Hontz, Jr.
Others to watch: Ngianni Cerisier, So.; Devon Comber, Fr.
Coach’s outlook for the season: “With a first-year head coach, we only have three seniors on the team. With a relatively inexperienced coach and team, we will have to learn quickly to stay near the top of the conference. One of the team goals is to have at least five runners break 17 minutes for the 5K race. If we can meet that goal, we will be competitive in the league. Our gap between runner one and five could be small if the guys work together during our workouts.”

Pennridge
Coach: Terry Permar (22nd season).
Last year’s record: 1-5 SOL Continental.
Key performers lost: Andrew Saville; Jared Pleibel.
Key returners: Matt Eissler Jr.; Ethan Saville So.; Gunnar Orth, Jr.
Others to watch: Matt Vaders, So.; Tom Geiger, Jr.; Cole Doster, Jr.; Andrew Reice, Fr.
Coach’s outlook for the season: “This team is working really hard and has already dropped a lot of time from last year, whether that is enough and translates to more wins in a tough Continental conference remains to be seen. An early hit is the loss of our numbe-two runner, Luke Eissler, out for the season with a stress fracture.”

Dock Mennonite
Coach: Justin Feil (third season).
Last year’s record: 4-7; 4-4 BAL, BAL Champions; second in District 1-A.
Key performers lost: Camryn McCloskey (York College); Alana Bergey; Juliana Rotelle; Lael Flores; Abigail Keller
Key returners: Erica Gunden, Sr.
Others to watch: Isa Rodriguez, Fr.; Sarah Kennel, Fr.; Abbie Woods, Sr.
Coach’s outlook for the season: “With only one full-time returner, we are hoping to stay healthy and have enough to compete as a team at the BAL and District 1A Championships. We have a great four-year runner in Erica Gunden, who always improves as the season goes along, and two promising freshmen. Abbie Woods will be a big addition while balancing playing tennis. Depth will be a question with a small group, but they work hard. We would love to contend for the BAL Championship again, but that will be a challenge without as much depth as we have had. The District Champion returns and they will be a target that should push us to improve. We hope to better our times consistently through the season.”

Key returners: Sarah Nicoletti, Sr.; Anna Price, Sr.; Julia Malachowski, Jr.; Becky Sobeck, Jr.; Olivia Leber, Jr.; Carly Ukalovic, So.; Maddy Ziegler, So.
Others to watch: Julia Foley, Sr.; Mira Erzhanova, Sr.; Maura Duffy, Sr.; Mia Sheldon, So.; Maya Leber, Fr.
Coach’s outlook: “This is a hard working team that has put some miles on during the summer runs. They have been dedicated to their training during the preseason part of the schedule. The PAC Liberty Division is stacked with PV, OJR, Spring-Ford and Boyertown to race against. We hope to develop some mental toughness and make our opponents race when they meet us out on the course.”

Upper Moreland
Coach: Mark Mullelly (first season)
Last year’s record: 1-4 SOL American
Key returners: Mary Thompson; Victoria Leister; Jillian Kelly; Ashley Choi; Jenna Painter
Coach’s outlook for the season: “Although the team is small, a core group of varsity runners has put in a lot of work this summer and are expecting to compete well with the rest of the American Conference.”