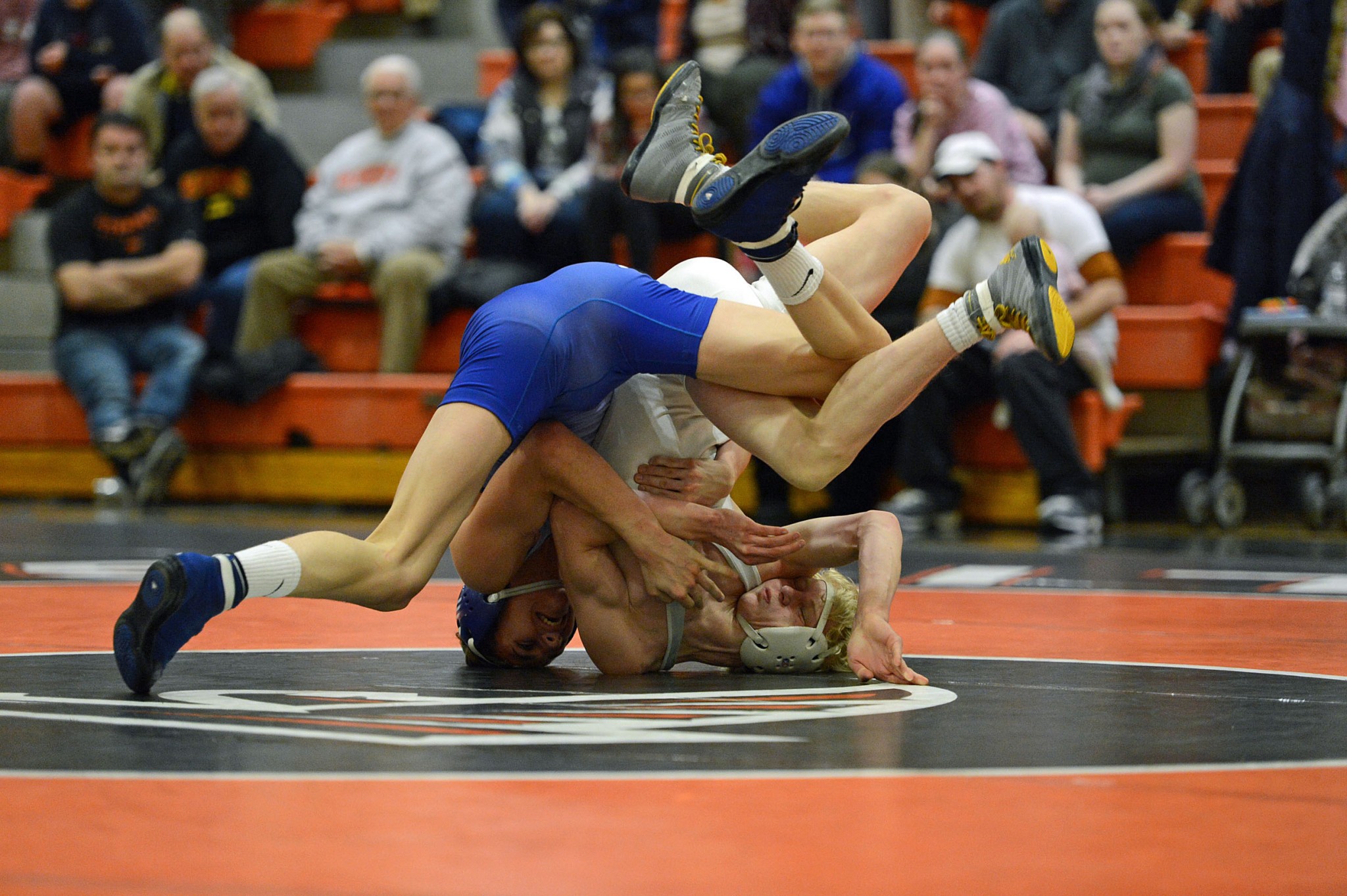 Pennsbury’s Antonio Martoccio and Neshaminy’s Jackson Erb clash in exciting finale to the match between the Falcons and the Skins Jan. 17 at Pennsbury.    (John Gleeson – 21st-Century Media)

FALLS TWP. – The dramatic finish to the recent Pennsbury/Neshaminy wrestling meet turned into a showdown even Cecil B DeMille would have loved. After 13 bouts, only six points separated the two archrivals. Who best to settle the heated affair than the team’s two most potent young guns, the Skins’ Jackson Erb and the Falcons’ Antonio Martoccio.

Martoccio, a junior, has amassed a three-year varsity record of 76-17 and qualified for states as a freshman. This year, he has built an impressive 14-2 mark. Erb, a sophomore, carried similar credentials into the night’s bout. As a freshman, the 126-pounder racked up a 34-8 record that included a trip to regionals. This year, he is already 21-2.

The stage had already been set with the overall match proving a real seesaw event. Pennsbury (4-7, 1-1: SOL National) drew first blood when Doug Molle decisioned Luke Landman in the initial 132-pound pairing. Neshaminy (7-12, 3-0) answered with two straight pins by Austin Saba (138) and Rory Rienzi (145). Not to be outmuscled, the Falcons fought back with falls from Shaun Peel (152) and Connor Gowton (160).

The back and forth battle continued. Neshaminy recaptured a 21-15 lead on a decision by Brock Leinbach at 170 pounds and a pin by Zack Magdelinskas (182). The Falcons refused to surrender, picking up 12 points via a forfeit and a quick pin by freshman Davis Lee in the 220-pound bout.

The Skins retaliated with three straight pins by Kyle Osterhoudt (285), Ethan Ohler (106) and Harry Fornes (113). A Neshaminy forfeit at 120 made the score 39-33. Time had come for the two youthful mat titans to decide the meet’s outcome.

Jackson was well aware of the match’s significance. “It had a huge impact. That meet could have maybe entered us in the District Duals, which is for the best teams in District One.”

Neshaminy, which sported a 2-0 league mark going into the night, had to juggle their lineup. In Jackson’s words, “We had a couple kids out with the flu. Our starting 145-pounder and backup had the flu so we had to throw in our third string and he came out with a pin. We also bumped our 160-pounder, Brock Leinbach, up to get a win and help us win the match.”

All the strategy worked, leading up to the final showdown. A Neshaminy win would ice the victory. A Pennsbury pin would tie the score and send the outcome to a tiebreaker.

Jackson was psyched. “Right before my match, we had back-to-back pins at 106 and 113. I went off that energy and was ready to go. I had never wrestled him (Martoccio) before. Actually, we grew up together, wrestling on the same club team. He was always a weight below me.”

Martoccio controlled the early action, putting Erb on his back in 20 seconds and then building up a 6-0 lead. A savvy, mentally tough competitor, Jackson was not about to succumb. “When I was down 6-0, I was afraid of getting majored. Then I got a reversal and I realized he had weak spots. I thought, ‘I can win this match.’”

Jackson used two reversals and a stall point to narrow the score to 6-5 in the final period. “I was confident in getting out from bottom so in the third period, I chose down. I reversed him and rode him and that forced the stall call that gave me a point. Then I got a half tilt that gave me two back points.”

The last-second decision assured the Skins a 42-33 victory and brought elation to the Neshaminy sidelines. “I felt great after the match. It was probably one of the most fun wins of my career to be a hundred percent honest. It was the best feeling ever.”

The win also shows Neshaminy is peaking as it heads into the heart of their schedule. “At the beginning of the year, we had a lot of returning varsity wrestlers get hurt or quit. That hurt us. We started off rough but in our last six matches, we were 4-2. We’re 3-0 in the league. We have tough matches coming up against Truman, and Council Rock North and South. Truman beat us last year for the first time in 30 years so we’re looking for revenge. North and South are always tough.”

Based on their showing against a strong Pennsbury team, Neshaminy is ready to meet the challenge.