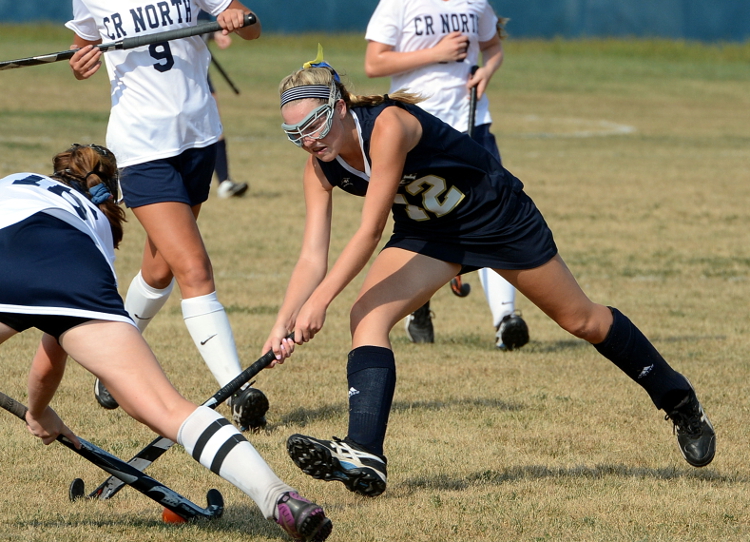 In a 1-0 win over the ninth-seeded Knights, the Golden Hawks absolutely needed Masone to come through with a clean sheet.

Just as soon as the clock struck all zeros Wednesday night at Walt Snyder Stadium in Newtown, Masone put another notch in her 2016 belt.

“It’s just one of those numbers that you keep in your head when you’re a goalie,” said Masone, of her shutout in the district playoff.

“Just like the girls scoring goals like to keep their totals, that’s always my goal. I want to keep that number growing and get it as high as I can for the season.

CR South wasted no the getting on the scoreboard in its District 1 Class AAA Round of 16 matchup against North Penn. The Golden Hawks marched down the field with a couple of crisp passes, and the volley was capped off with a goal by CR South senior Paige Schmid, who tallied off a feed from freshman Katelyn Cocco just 4:06 into what turned into a defensive battle between the sides.

For Schmid, it was her 10th goal of the season and the Hawks made it count in the win over the Suburban One League (SOL) Continental Conference Knights. CR South senior Caroline McGovern, who leads the Hawks with 37 goals and nine assists, was held scoreless.

CR South head coach Lisa Belz says scoring early is a goal in any duel in which the Hawks take the field, but especially in districts

“I think that’s a good philosophy in any sport – it kind of gets the other team back on their heels,” said Belz. “You score early and come out strong with a lot of intensity – it’s a good strategy to have.”

After the lone goal by Schmid, there was plenty of action from both sides – but most of it was between the 20s. To demonstrate the defensive tone of the match, consider each side had but one penalty corner in the second half.

The Hawks gets two chances to make states. If they falter against Unionville, they enter a playback bracket that begins Tuesday, Nov. 1. The last time CR South made it to states was 2004.

Meanwhile, North Penn’s season ends at 13-7 (9-3: SOL Continental). The Knights outpaced No. 24 Wissahickon by a 4-1 score Monday, Oct. 24 in a district tournament opener to advance to the Round of 16.

O’Donnell (2G, 1A), Barrow and Blackshear scored in the win over the Trojans.