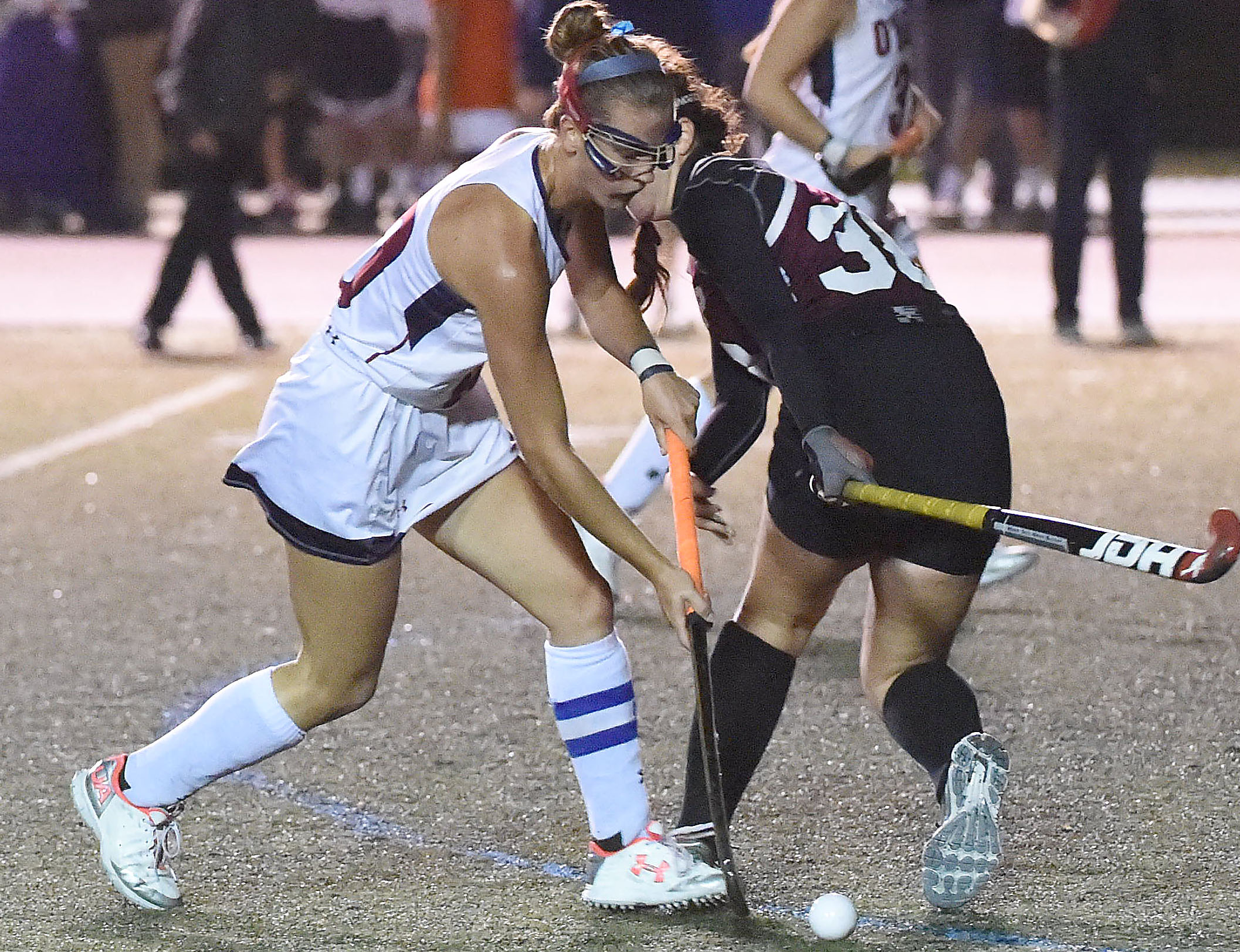 MARPLE >> Sara Hayes keeps time on her illustrious athletic career not by seasons or varsity letters, but by a simpler metric.

“I have 11 Catholic League title plaques in my career,” she said.

The unabashed goal for the senior field hockey/softball/track/cross country athlete is to raise that total to 15 by the time she leaves Cardinal O’Hara to play field hockey at Saint Joseph’s University.

Cardinal O’Hara’s Sara Hayes gets around Bonner & Prendergast goalie Chelsea Rafferty on the way to her first of two goals in a 4-1 O’Hara win Wednesday. (Digital First Media/Pete Bannan)

A big part of the groundwork for the 12th title in that collection was laid Wednesday night, when Hayes scored twice to lead the Lions to a 4-1 win over Bonner & Prendergast, dropping the Friars from the ranks of the Catholic League unbeaten.

Hayes did some of the separating, bookending goals by Makayla Gallen and Hannah Nihill. Her second goal came in a scramble near the crease — “my job is just to finish,” Hayes will remind you — but she’s most noticeable for her bombing runs forward as O’Hara (9-0 overall, 5-0 league) turns on its transition game.

The Lions excelled in keeping the Pandas hemmed in for large stretches, and with strong stick-handlers like Gallen and Emily Quintus in the middle, they’re always just one pass from springing Nihill and Hayes on odd-man rushes.

That’s what happened with 8:14 left in the first half, when Hayes got possession, withstood a failed clear attempt by Bonner & Prendie goalie Chelsea Rafferty well off her line and recovered to sweep home a goal.

It’s an instance where Hayes’ cross-training comes in handy.

Goal @OHara_FH! Nifty stick-handling by Makayla Gallen and she buries it. 2-0 O’Hara, 5:22 to half. pic.twitter.com/81VwaSThoc

Hayes showed the other part of her game on O’Hara’s nine penalty corners, stealthily creeping to the post on the weak side. When the ball filtered over to her with less than four minutes to play in the game, after a Nihill shot was kicked aside by Rafferty, Hayes buried the scraps.

Wednesday was a night where Hayes’ dedication really paid off. Her typical week consists of three field hockey games, her “main priority,” and a cross country meet on the weekend. That means sneaking in her distance running after the field hockey grind ends each day.

It’s easier in the winter when she has just indoor track to consider, prepping for distance runs in the spring. As a freshman and sophomore, she balanced track with softball before taking a sabbatical from the diamond in her junior year. But with her college path sealed, she’d like to give softball another go this spring.

Hayes’ was the second corner O’Hara scored on, wearing down the Pandas’ legs with the constant retreating and recovering. Nihill’s goal materialized from a corner, Quintus slow-playing the ball with Nihill posted up near the edge of the crease and reverse-sweeping one home behind her back.

For long stretches, the Pandas were able to repel O’Hara’s advances. It took more than 20 minutes for a breakthrough, a testament to the defensive resilience and aided by Rafferty’s 15 saves.

“Defensively, we’re working on teamwork,” Bonner & Prendie midfielder Riley Dolan said. “When you see another player, you just communicate and talk and let your teammates know you’re there. It’s really all about communication and teamwork on defense, and we really came together to shut them down.”

Bonner & Prendie (5-2, 4-1) got on the board with 2:39 to play off a penalty corner, with Dolan’s ball into the danger area fed from Maeve Finnegan at one post to Katie Caruso at the other to break the shutout. The marker prevented a repeat of last year’s Catholic League championship game, a 4-0 win by O’Hara.

O’Hara’s defense was good when called upon. They surrendered four corners, and Jen Ahearn stopped two shots. But Quintus and Liz Tosta produced defensive saves in quick succession on Bonner & Prendie’s first corner in the final minutes of the first half, denying Caruso and Kerri Quinn to send the teams to half separated by two goals.

A title-game repeat is one of the end goals for both teams, and Wednesday provided the most meaningful measuring stick yet.

“It’s really important because they’re definitely our biggest rival in the Catholic League,” Quintus said. “We definitely wanted to come out and kill it as a team. They played really good, too, so it was important for us.”

Also in the Catholic League:

Coatesville 3, Sun Valley 1 >> Liz Johnson gave the Vanguards a lead before halftime, but a pair of goals by Molly McGaughey surged Coatesville ahead for good after the break. Jaclyn Prince made 11 saves for Sun Valley.