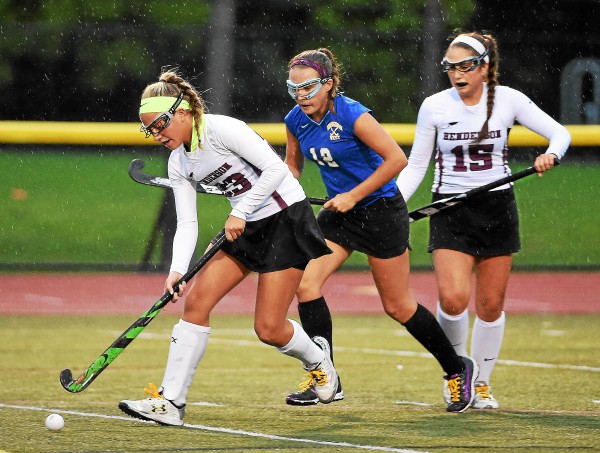 To view a photo gallery of the game click here.
Downingtown West coach Jeff Riccardo said, “We did a good job possessing the ball under tough conditions. The ball runs fast when it’s wet. We ground it out tonight, got a goal early, and we did what we had to do defensively to preserve the win.
“I thought we did a good job tonight as a whole – no one player in particular, but we were solid everywhere, consistent in every position.”
Junior midfielder Romea Riccardo, committed to University of North Carolina for field hockey, scored the game’s lone goal at 22:36 in the first half for the Whippets.
Jeff Riccardo said, “Romea really does a good job holding down the middle for us.”
The West coach praised his defensive backfield for keeping Henderson off the scoreboard – sophomore left back Anna Miller, sophomore center back Celina Riccardo, junior right back Laine Garber and senior sweeper Emily Brechbill.
Celina Riccardo said, “I felt like our speed was good tonight. Playing in the rain tonight, I tried to think positive when I was running to the ball. It can be tough to stop the ball on a night like this – the ball skips when it’s wet.”
West goalie Caitlyn Coker wasn’t challenged often Thursday night, but she made two saves to help preserve the shutout.
“Caitlyn doesn’t get a lot of action back there, but when she’s needed, she does a great job for us,” said Jeff Riccardo.
Henderson head coach Jen O’Donnell said, “This was a very tough loss for us. It wasn’t because of the rain, we didn’t play our best game tonight, and Downingtown played well. We let Downingtown dictate the pace, we were waiting for the ball instead of attacking like we did in our last game against Kennett. We were slow out there, and letting Downingtown pass around us. You can’t wait for the ball.”