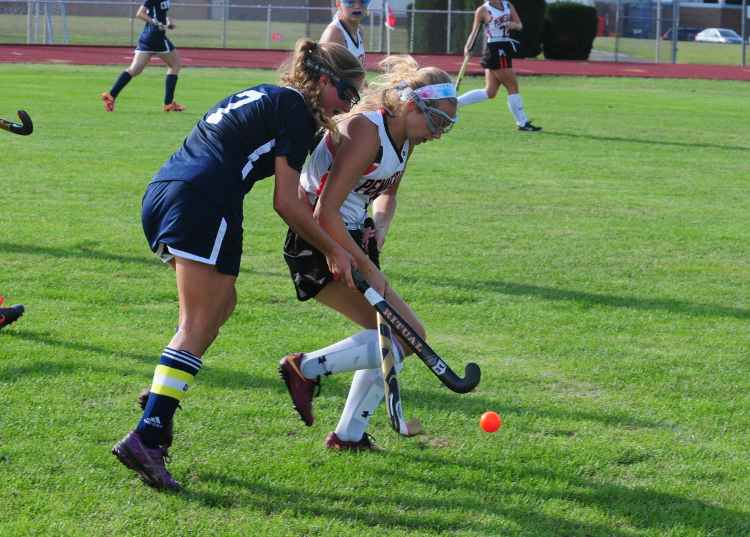 FALLS TWP. – Council Rock North hadn’t scored a goal in a game in 120 minutes of action, not officially anyway. Luckily, the visiting Lady Indians have senior Anna Lehman – who is known as Nerd to her CR North teammates – on their side.

Locked in a scoreless deadlock with Pennsbury (3-4-1, 2-3: SONL) through 60 minutes of regulation, the 2015 All-Suburban One League National Conference forward finally got the Rock off the schnide when she poked home a feed from junior Bridget Thompson just 1:23 into overtime, sending the Indians home with a 1-0 triumph in overtime Wednesday, Sept. 21 at Falcon Field.

“We are so happy to have Nerd on our team, today,” said Thompson. “She had an awesome game and she was one of the players that kept us in it.

“She finished on that goal. She was really consistent and her dribbling was awesome.”

Two days earlier on the turf at Walt Snyder Stadium vs. Neshaminy, North (5-4, 3-2: SONL) thought it had an opening goal by Thompson, only to have it waved off by officials. A few minutes later, the Redskins scored when Elayna Curtin put one into the back of the cage on a penalty corner.

Neshaminy made the lone goal stand, dropping the Indians to 4-4 overall, 2-2 in the SOL National Division.

“Bridget Thompson scored an absolutely beautiful goal,” said Lehman. “But we should have picked it up after that and scored another one.

“We’re going to remember that and continue the season making sure that we always make up for our mistakes.”

In this game, while the Rock squandered a 7-3 advantage over Pennsbury on penalty corners in the second half and a 12-6 edge for the entirety, the Indians wasted no time in the extra session. Thompson and Lehman went in on a two-2-man break, with the former hitting the crossing pass and the latter poking home the game-winner.

“We wanted to get the ball into the circle as quick as possible,” said Lehman of North’s strategy in overtime. “We wanted to try and score as quickly as possible because overtime is always really stressful so getting it over with is good.”

“We always really want to beat Pennsbury because they live so close to us so it’s a big rivalry.

“I know everyone at the school was really rooting for us.”

For their part, the home team Falcons let several chances to score slip away in the first half, though the Indians still held a 5-3 edge in penalty corners before the break. After the intermission, it was all Rock North.

“We really wanted to concentrate on keeping it on our side of the 50 (yard line) in the second half,” said Lehman. “Our defense was really good and our goalie Margaret D’Auria did everything she had to to keep it out of the cage really well.

On numerous occasions in the second half, the Indians got the ball past Pennsbury senior goalkeeper Michele Deodati, only to shoot wide or have a Falcon defender come up with a stop.

“We really have to work on our tips and getting low and getting to the cage,” said Lehman. “That’s something we’re going to be practicing.”

Pennsbury clogged up the middle of the field, especially in the scoring circle on a dozen or so penalty corner opportunities for the Rock.

“We need to spread out more and cut in front of the defenders, because they had so many in the circle,” explained Lehman.

“We’re really going to work on that and just trying to finish.”

“Obviously, you can dominate a game and not score and if you don’t score, you won’t win.”

Kid sister to Katie Lehman (Penn State), Anna was given her current nickname by the CR North Class of 2014 graduate many years ago. Somehow, it stuck.

Luckily for North, Anna Lehman stuck to her resolve in helping the Rock over a very big hump Wednesday afternoon at Pennsbury.

“This was definitely a turning point,” said Thompson.

“If you think about it, it’s a lot like what happened to us last season, just the order is different.

“We’re just going to take this opportunity as a catalyst to just keep on going, to keep the positive attitude and hopefully, finish out the season a lot stronger than we started.”