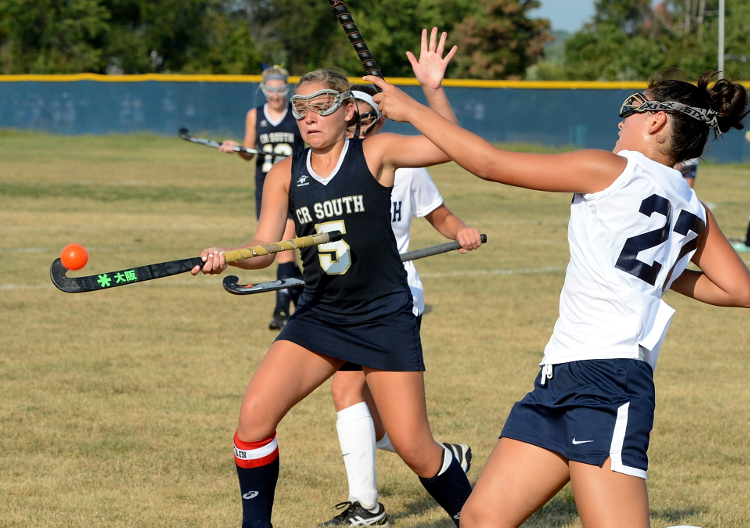 NEWTOWN – Every sports season features a myriad of outcomes from nail-biting finishes to lopsided routs. The team weathering both extremes is usually the one wearing the golden crown come the season finale.

Winning a hard-fought overtime contest shows that a team has character and heart. On the other hand, staying focused when you are blowing another team out demonstrates poise and purpose. The Council Rock South girls hockey team has done both this year.

Presently, the Golden Hawks sit atop the highly competitive Suburban One League National Division with an unblemished 3-0 mark. Overall, coach Lisa Belz’s charges have logged a perfect 6-0 record. Even more telling, South has outscored its six opponents by a 37-6 margin.

Not every game, however, has been a lopsided rout. The Golden Hawks began the 2016 campaign with a thrilling come-from-behind victory over Central Bucks East. In a rare moment, South found itself down 3-1, seven minutes into the second half. Two goals by Tori Wright knotted the game and set up the overtime dramatics. Just over 11 minutes into OT, Mikayla VanAken deflected a shot by Caroline McGovern into the net to give the Hawks the win.

Paige Schmid, who along with Caroline McGovern, Emily Keller and Sarah Womer, form a strong leadership quartet, recognized the game’s significance. “It was important because they’re not in our league. It’s good to win out-of-league games because it helps when you come to playoffs.”

The comeback victory must have inspired a long-lasting adrenaline rush in the Golden Hawks as they went on to defeat Hatboro 8-0, Abington 7-0, Council Rock North 5-1, Wissahickon 7-2, and Harry Truman 8-0.

Paige notes that all five of those games reflect what has become a characteristic of the new look Hawks…score early and often. “We lost a lot of good seniors from last year but we have some younger players who are really getting the hang of it. We’re all playing together. We’ve been scoring earlier in the games and that helps put other teams on edge. We’ve been scoring in every game before the first five minutes.”

Caroline McGovern leads the scoring assault. The 2015 first team all-state selection has already found the back of the enemy’s net 13 times. She is taking aim at breaking her own school record of 33 goals scored in 2015. Paige is not far behind netting six tallies.

Paige knows that, despite such an array of firepower, the Hawks cannot become complacent. Against Truman alone, South peppered the goalkeeper with 37 shots. “We try not to play with too much confidence when we know we’re up by a lot. We try to play like its 0-0 so we don’t relax and fall behind. That would be really hard on us. So we play hard the entire game.”

The Golden Hawks’ effort was most evident in their 5-1 win over rival Council Rock North on Sept. 9 in Newtown. South not only battled a worthy foe but also an oppressive heat that forced the game to be changed from Walt Snyder Stadium to the grass field.

“We were all pretty mad because playing on turf is so much better than playing on grass. But we just kept our heads in it and didn’t let anything overcome us because we knew that winning this game was so important.”

In typical fashion, the Golden Hawk offense struck quickly. McGovern scored two unanswered goals in the first seven minutes of play, giving South the all-important momentum. “After scoring quickly, we breathed a sigh of relief. After you get a couple goals up on the other team, they become harder on themselves and that can cause them to make mistakes.”

Paige’s words proved prophetic. Goals by Shannon Lind, VanAken and McGovern built the Hawks’ total to five. The Indians, on the other hand, could manage only one tally on a penalty stroke by senior Julianne Mangano.

Paige rates the 5-1 conquest of CR North as the Hawks’ biggest moment in this relatively young season. “Our North game was key. That is our biggest rival and winning 5-1 gave us a lot of confidence.”

The Golden Hawks know not to get overconfident about the win. “Winning the game was very exciting but we can’t let that get to our heads. We still have to play them again. They’ll come out even harder.”

South should be ready to take on any comer. They have already established themselves as a force in the SOL.