Pennsbury field hockey pours it on after the break at Abington 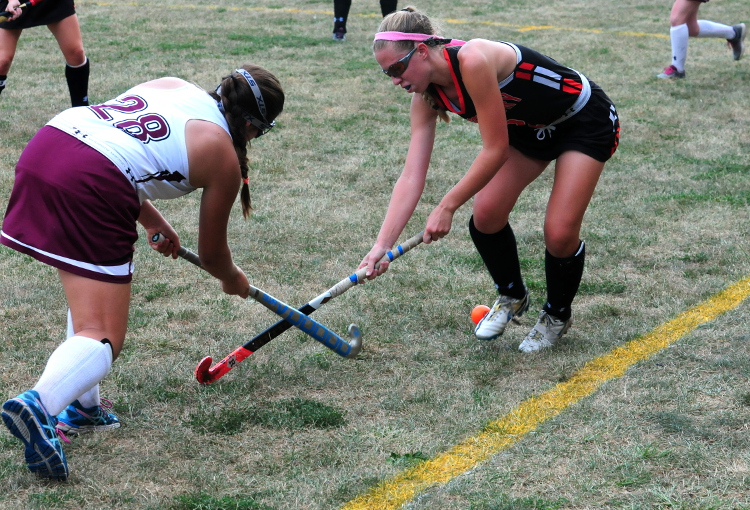 ABINGTON – Pennsbury might have gotten off to a slow start facing Catholic Academies rival Mount Saint Joseph in its Sept. 2 season opener. But the Lady Falcons have surely made up for it with two straight shutout wins in Suburban One League (SOL) play.

One day after blanking Bensalem on its home pitch, Pennsbury scored a pair of goals in each half on its way to a 4-0 win Sept. 8 at Abington.

With her team on top 1-0 on a goal by sophomore Sammie Hackman, junior Kate Chesney tallied her third goal of the season while adding a pair of assists to lead the Lady Falcons. Chesney’s goal came in the last 30 seconds of the first half on an end-to-end rush in which she was sprung loose on a pass from junior Maddie Hackman.

The Falcons outpaced the Galloping Ghosts on penalty corners 4-2 in the first half and 10-5 for the game, though neither team tallied on a corner opportunity.

No matter. Pennsbury received second-half strikes from Maddie Hackman and Maya Geller off crossing passes from Chesney that gave each goal-scorer an open net in which to shoot.

“We went in knowing it was going to be an aggressive game; it always is with Abington,” said Falcons co-captain Amelia Sharp. “We’re a good matchup with them. We have similar field situations too. We both know how to play on grass on bumpy fields.”

This victory aside, Pennsbury’s play started out a little on the timid side with Abington senior Sam McGee (St. Joseph’s University/lacrosse) going to goal in the fourth minute and forcing the first penalty corner in the game on the side of the Ghosts.

The Falcons turned it up a notch in the last 10 minutes of the first half and seemed to cruise, from there.

“And in the second half, we definitely got it together a little bit more.”

At one point midway through the second half, Pennsbury was awarded five straight penalty corners. Try as they might, the Falcons could not connect on those corner-ops.

“We really worked the right wing in the second half with all those crosses. And we had a bunch of them that could have gone in,” explained Sharp. “We just missed a lot of goal opportunities in the second half.

“We were down there; we just need to put the ball in the cage.

“That’s definitely something we need to work on, especially with some of our tougher games coming up against Neshaminy, Council Rock North and Council Rock South.”

Pennsbury enters the 2016 season coming off a 9-5 finish in the Suburban One National League last year. After taking fourth place in the league, the Falcons went to districts where they lost to Owen J Roberts in the opening round.

When graduation took place in the spring, Pennsbury waved goodbye to outside midfielder Marguerite Salamone and right winger Missy Frankel along with defenseman Isabel Glace.

Marguerite Salamone and Missy Frankel were both on the team since their freshman year in high school – they’re both amazing players, so definitely big shoes to fill,” stated Sharp. “Isabel was our strongest defender – amazing block tackles all the time.

“It’s big shoes to fill but I think a lot of the girls – especially the juniors – are doing a great job.”

Junior Annie Price has stepped into the spot vacated by Frankel.

“She’s doing a great job,” said Sharp. “She has great possession of the ball and she’s always in the right position.”

In their start Sept. 2 at Mount Saint Joe’s, the Falcons started strong, trading goals with the Magic to enact a 1-1 deadlock going into the break. MSJ tallied twice in the second half, however, to come away with the win.

“We got beat in the three (on) ones back in the goal cage,” explained Sharp. “If we recovered more we could have saved that game.”

For Sharp, the only senior on the team, the goal is to win and have fun.

“I want to have fun and I want to have a winning season,” she said. “It’s my last season here and I’ve always enjoyed playing since my freshman year.

Sharp would like to see her team emerge with wins against Neshaminy, Council Rock North and Council Rock South. Coming off an unbeaten season, the Skins are the defending SOL National Champions. But they lost a lot to graduation including Division 1 commits Amanda Blum (Quinnipiac), Marlena Koellner (Sacred Heart), Maria Palmieri (Drexel) and Christen Pennington (Villanova).

Pennsbury comes to the table with a decent amount of club talent this season including Amelia and sophomore Anna Sharp, juniors Amy Ronin and Nell Webber – all the above play at Mystix. Additionally, the Hackman sisters do their training at Princeton field hockey.

Webber and Sammie Hackman registered individual goals for the Falcons in their recent 6-0 win over Bensalem while junior Olivia Mauro and Chesney tallied twice versus the Owls.

NOTES: Pennsbury (2-1, 2-0 SOL) will host Hatboro-Horsham in a non-league matchup on Monday and Abington (1-2, 0-2) will be on the road at Neshaminy on Tuesday.