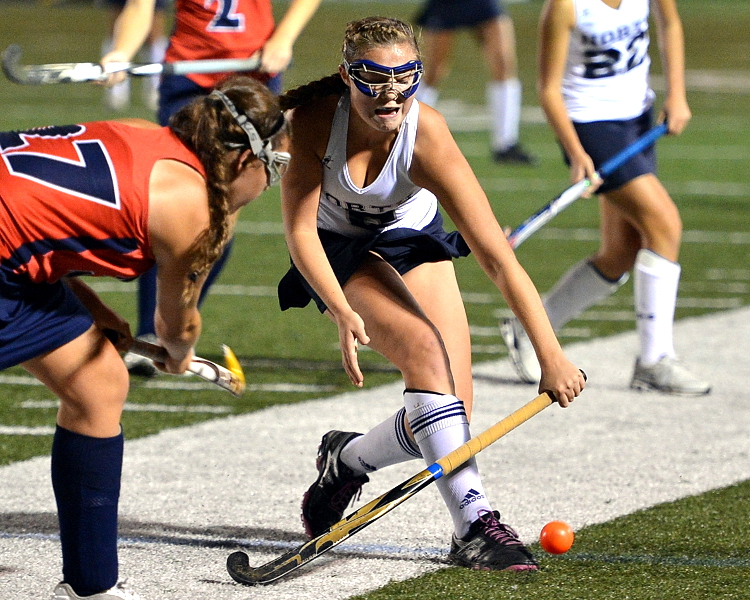 NEWTOWN – For Council Rock North senior midfielder Jennica Jonovich, the plan for her college future took years to completely unfold. She has been conducting her search for the college or university in which she would continue her career since freshman year in high school.

A product of the Mystix Field Hockey Club from Wycombe, she has spent the past few summers attending tournaments, recruiting clinics and camps, visiting numerous college campuses along the way.

The search is over.

Ironically, the Ohio State University – the place where Jonovich elected to play next year – was one of the last schools that she visited.

Nevertheless, she liked the idea of playing hockey in the Big Ten Conference and also the big city feel that the Buckeyes had to offer.

“I fell in love with the school,” she said, simply. “That convinced me to contact the coach more and really pursue Ohio State.

“It all fell in place my junior year.”

While she also considered Rhode Island, Jonovich signed an NCAA Athletic Letter of Intent to attend Ohio State back in November during the earliest signing period.

A four-year varsity starter and senior co-captain, Jonovich possesses a pedigree that the Buckeyes were looking for. Indeed, Jennica earned First Team All-Suburban One League (SOL) honors last year as a junior. She even received Honorable Mention on a list of All-State players last year.

Jonovich also likes what Ohio State has to offer.

“I like the atmosphere at Ohio State and the coaching staff is really amazing there,” she says.

“And there’s some big opportunities in the city.”

At Mystix, Jonovich and her U16 team were Pool Champions at Festival Palm Beach in 2013. More recently, her U19 team took second place in a Disney Showcase Tournament while finishing first in the National Club Challenge.

During her time with the Lady Indians, CR North made it to districts all four years Jonovich was on the team, captured a SOL National Conference trophy, a fourth-place district ribbon and a berth in states in 2014.

A First Team All-State, First Team All-League, and team MVP as a senior, Jennica believes the Indians’ program and head coach Heather Whalin have shown her the road to success at the next level.

“I definitely think North prepared me to take the next step, my coach especially; she also coaches me at club,” said Jonovich. “She’s really hard on us and she coaches me to play to the best of my abilities.”

“The team atmosphere here really helped me bond with the girls and I know that will help me when I get out to Ohio State.”

Jennica thinks she might get a chance to play right away at OSU. Her versatility could play a factor in just how soon Jonovich sees collegiate action. A player who ranked among the top 12 scorers in the Suburban One League as a junior, she was a defender when she played at Mystix.

“I definitely think I have a chance to start and play my freshman year,” she says. “It all depends on how hard I work in the summer and how in shape I come.

If her summer coach – Whalin – has anything to say about it, Jonovich will arrive in Columbus in the best shape of her life.