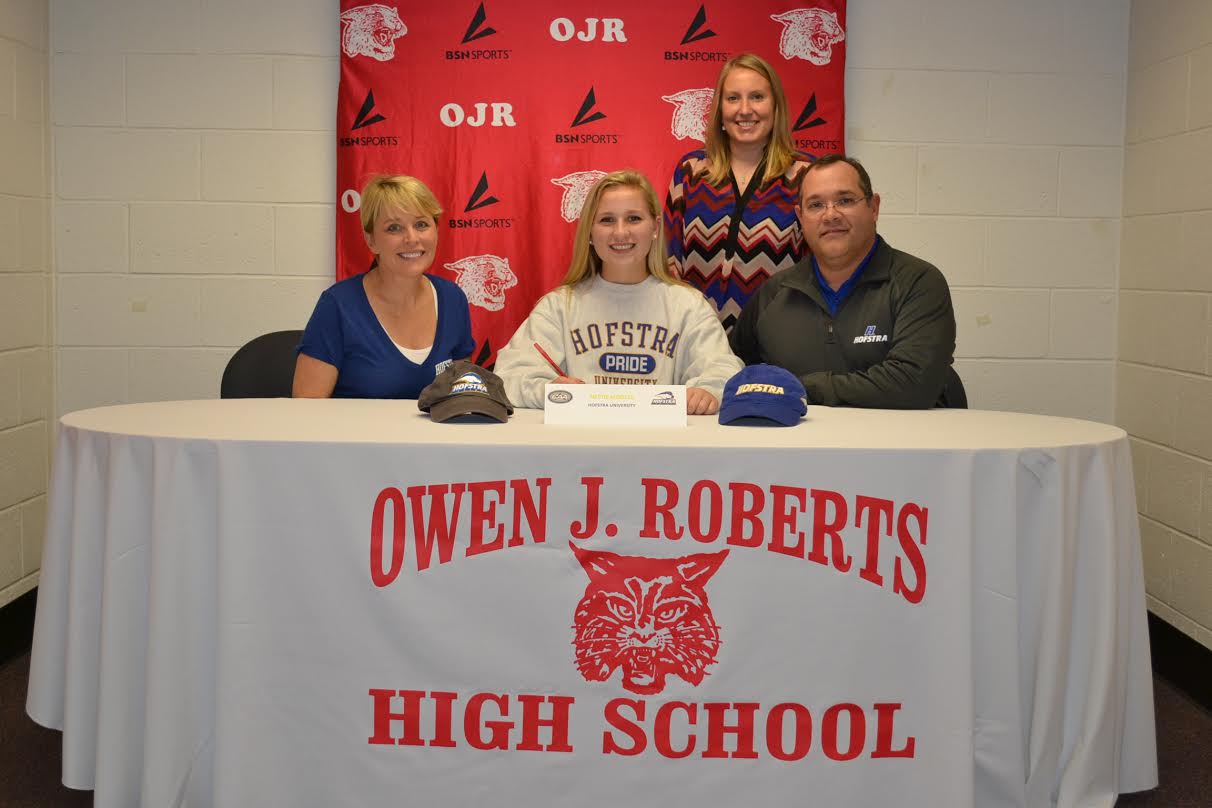 Asked about some of the key attributes that made Nettie Montes a Division I field hockey recruit, her head coach at Owen J. Roberts, Amy Hoffman, summed it up succinctly.

Montes, a star on defense who committed recently to Hofstra University, chose the Hempstead, N.Y. school over American University, Lafayette and Yale.  It’s the realization of a dream that spawned in middle school, when Montes said the game began clicking for her.

It showed as she immersed herself in winter indoor leagues and with club team X-Calibur. Once she got to high school, Montes stopped playing lacrosse, she said, “because I knew I needed to make that commitment year-round to achieve my college goal.”

Clarence Jennelle, her coach for X-Calibur – also Montes’ head coach at OJR until leaving for a coaching job in Texas last year – quickly noticed her appealing skill set and drive. Jennelle spoke of her quickness, field vision and knack for reading situations, along with her decision-making and toughness.

“She can take a hit and fight to the end,” Jennelle said.

Which is exactly what Hoffman saw as Montes’ play, relentlessness and leadership helped lift OJR to the PAC-10 championship last fall, a goal the team had set after finishing runner-up in 2014, and a fitting conclusion to Montes’ sparkling high school career. The Wildcats went 11-2 in the league, reaching the third round of the district tournament, falling to eventual champion Unionville, and losing in states to Palmyra, which advanced to the state final.

“That was just the best feeling, achieving that (league championship) goal we had had all through high school,” Montes said. “And in those (later) games we lost, we knew we left everything we had out on the field.”

“She had a big impact,” Hoffman said. “She’s always going to give you everything she has.”

Montes was first-team All-PAC-10 as a junior and senior, second-team as a sophomore. Last season along with her stellar defense, she added 12 assists and three goals. She was a Philadelphia Field Hockey All-Star selection as well.

“I really enjoy stopping goals as opposed to scoring them,” Montes said. “It takes so much skill to play field hockey. It’s not an easy game at all. There are a lot of fouls. I really liked the aspect of it that it took so much to be good at it.”

Montes’ technical skill development converges with keen anticipation and great instincts. The result is a special player who knows all the details required to win, and one who makes her teammates better.

“She times her stepping up defensively very well,” Hoffman said. “If there is that player running down the field right at her, she’s able to time perfectly when she needs to lay her stick down and intercept, or make a block tackle. When she does get the ball she’s able to distribute it very quickly. It’s almost like she sees the girl coming and she knows when she sets up that she’s going to get the ball to her. She thinks one play ahead all the time.”

And when a top player is also a natural leader, a coach’s job is easier.

“She leads a lot by example, but she also makes sure the people around her are going to have the opportunity to improve and gain confidence,” says Hoffman. “She’s constantly talking and telling the girls where to go, helping them out. They do what she says, because they trust her and they know she knows what needs to be done.”

Montes’ international playing experience also gave her a leg up on her journey to D-1 field hockey.  It was certainly a big highlight competing for the Puerto Rico women’s national team in the fall of 2014. Her father, Antonio, being a native of Puerto Rico, made her eligible for the team, giving her a life experience and field hockey experience she’ll never forget.

“It was really an amazing experience,” she said, “because I take Spanish at school but don’t speak it at home. But with the team, the coaches and players spoke Spanish, so I really had to put the skills from school into a real-life context. I really enjoyed going, not just because of playing but for the experience of the coaches and cities.”

Also an excellent student – she’s a member of the National Honor Society, Spanish Honors Society and student government – Montes feels well prepared for college both on and off the field.

“When I went to visit Hofstra, I knew right away,” she said. “I loved the atmosphere, the girls were all best friends, the coaches were all nice, and I loved the location (seven miles from New York City).”

Being among the youngest on her college team next season may be a feeling akin to what she experienced as a sophomore at OJR, when Montes was the youngest player on varsity and remembers, “It was a little intimidating. So I knew I always had to work my hardest to be able to keep up with the girls.

“Going into my junior year, that’s when everything got real, because that’s when all the commitments were happening, so I had to put in all that work. I knew all that work was needed to achieve my goals.”

It all paid off beautifully for a full-time player and competitor who’s now got four bright years ahead of her at Hofstra.