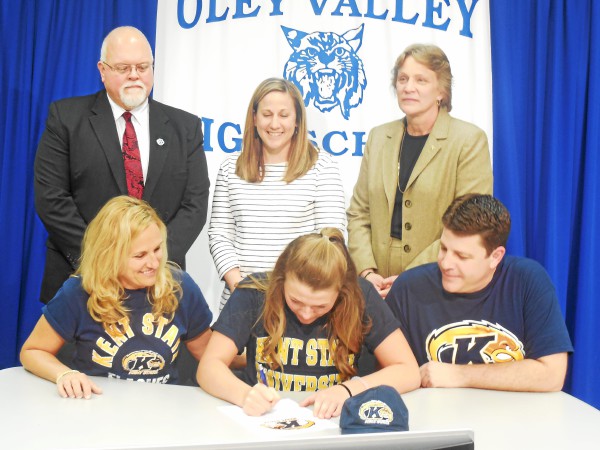 For Courtney Weise, field hockey has been a part of her life since she was in third grade. It will continue to be a part of her life for at least another four years as on April 22, the Oley Valley High School senior signed her national letter of intent to play field hockey at Kent State University in Ohio. Weise is going to major in biology (pre-med) possibly be a physician assistant.

“Because we’re from Oley and the program is so strong, we’ve seen girls go on and be successful at their colleges,’ said Weise. “We’re so competitive and that’s imbedded in us.’

The process of trying to pick the right college is never easy. Courtney will attest to that as will any other student-athlete who’s been down this road. Weise visited a lot of D-1 colleges, so it wasn’t an easy decision for her.

“It all came back to where I felt wanted and where I was the most comfortable,’ said Weise.

Courtney will admit that the process was much harder than she had thought. Weise will also tell you that she wasn’t exactly sure what to expect when she started this journey.

“I really didn’t see myself going to a school in Ohio,’ said Weise. “I never heard of Kent State before I went to visit it.’

Two of her former teammates, Maggie and Jamie Fries, are attending Kent State. One thing that will help Courtney is having Jamie and Maggie there, so she won’t feel so alone her freshman year. They spoke to Courtney about their experience at Kent State and what she could expect from the team and the school.

She will be joining a program that is on the upswing. The Kent State team made it to the national tournament for the first time in school history last far. Weise is looking forward to helping the team continue that upwards swing. On her visit to the school, she liked her future teammates and was impressed with the facilities. One of the things that Weise liked about the team at Kent State is how outgoing and friendly they were.

“They had great things to say all the time,’ said Weise. “They were very funny and they were always together. They always hung out together. They’re always eating meals together and they’re always doing stuff together. I just loved that because I want to be a part of a team where there’s no drama or competition that’s unnecessary among them. They’re happy to be around each other.’

It’s a very surreal feeling for Weise who’s making the jump from playing high school athletics to a D-1 program. She knows that it’s a transition coming from a small place like Oley, to a big college. She’s excited about playing field hockey at that level and the whole college experience.

“I’ll definitely find out what it’s like to be on my own,’ said Weise. “I have my team to fall back on because I know they’re always going to be there for me, so I’m really not worried about it – I’m excited. I’m not going to forget my home town, but I’m definitely ready to spread my wings.’