Carroll saddled with tough loss to Moravian in OT 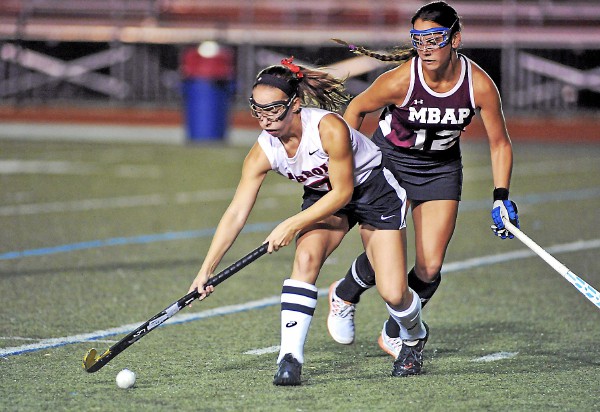 Tuesday afternoon at the Benjamin Johnston Memorial Stadium in the Germantown section of Philadelphia, overtime was good to Moravian Academy, the District 11 runner-up, which scored 6:24 into the extra period to earn a 2-1 decision over Carroll in the opening round of the PIAA Class AA tournament.

Sophomore Mayv Clune gathered in a rebound after Patriots goalie Kerri Mountz had stopped two shots by Katie Persin, then scored the goal that put the Lions (22-1) into the quarterfinal round of the state tourney and ended Catholic League champion Carroll’s season.

“This loss will stay with us for a while,’ said Carroll senior Keara McNulty, who scored in the eighth minute of the first half. “We just had trouble containing that No. 19 (Clune).’

Clune is a Quakertown resident who plays for the WC Eagles club team with several of the Cardinal O’Hara and Downingtown East players, who faced off against one another in the second game of the state tournament doubleheader at Johnston Stadium. Her mother, Diane Bracalente, played at Old Dominion University and with the United States team that took part in the 1988 Olympic Games in Seoul, Korea.

“I had a field hockey stick in my hand when I was younger,’ Clune said. “But I didn’t really start playing until I was in the sixth grade. I scored in overtime earlier this year against Southern Lehigh.

“We beat (Southern Lehigh) twice this season, but then they gave us our only loss in our district championship game. (Carroll’s) goalie stopped the shot and the ball came right to me. I just put it behind my back and got free for the shot.’

McNulty’s goal came after some strong work from Alyssa Lemons on an early Carroll penalty corner. Mary Catherine Jones came up big on defense for the Patriots, keeping a shot from crossing the goal after it got past Mountz.

It took 16 minutes before Moravian Academy answered McNulty’s goal, with a score by Vicky Tahos on a corner play.

McNulty and some of her teammates will spend the next week getting ready for basketball practice. Other Carroll players will train for lacrosse as the Pats try to extend their Catholic League domination and get back to the state playoffs in the spring.

“It was special playing together with this group of girls,’ McNulty said. “We had a lot of fun and did a lot of good things together.’