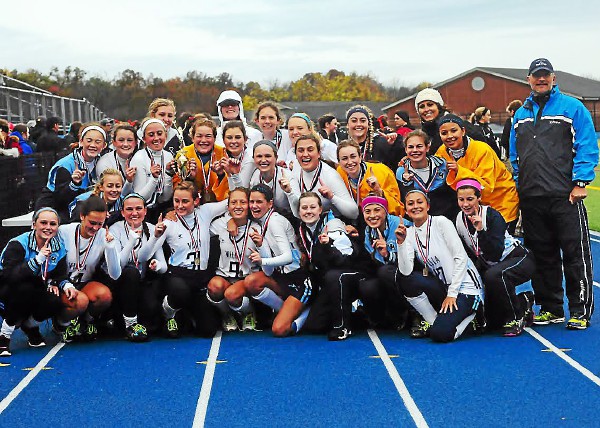 Amelia Iacobucci scored the go-ahead goal three minutes into the second half to kick start a surge over the final 30 minutes of play, leading to a 5-2 victory over No. 2 Gwynedd Mercy in the district title game Saturday at Wissahickon High School.

“The game was pretty close to that point,’ said Iacobucci. “It felt great to get that go-ahead goal. It’s so great to win a district championsip. You began to take it for granted, but after missing last year, it’s just so good to win again and go back to states, escpecially as a senior.’

It was the third time the Hurricanes had played Gwynedd Mercy this season, with the two splitting the regular season matchups. It was Villa’s sole loss of the season.

“It was a weird loss, but in a way I think it helped us,’ said Villa coach Daan Polders. “But sometimes it’s good thing to lose. If you take the right things from it, and learn from it, it’s not a bad thing, and can help motivate you.’

Villa jumped out to a 2-0 lead on goals from Abby Siana and Lindsay Dickinson, but the Griffins slowly worked back in it, cutting the lead in half with a score from Corrine Persechetti. Then, not two minutes into the second half, they tied it with a goal from Nicole Catalino.

It took Villa less than two minute to get back on top thanks to Iacobucci’s goal. From that point on, it was all Hurricanes. They rounded out the scoring with goals from Megan Vermeil and a second from Siana.

“It was great to see so many different girls score,’ said Polders. “I’m very proud of the way these girls played today.’

A year ago, it was Gwynedd Mercy that hoisted the trophy abover their heads, having defeated the Hurricanes three times, including the district semifinals.

“It probably shouldn’t have been, but those three losses were definitely in the back of my mind,’ said Villa’s Alexa Ostoich. “Both teams came out on fire today, and never let up. We play them so often — six times in two years. It was absolutely a goal of ours to get back on top, and beating them made it a little sweeter.’

The championship is the sixth in seven years for the Hurricanes, but the first under Polders.

“You never know how any season is going to go,’ said Polders. “They worked hard and bought into my philosophy, and made my job easier. This is just great for them. We’re really looking forward to the games still to come.’

Up next for the Hurricanes is a first round contest with with Manheim Central, the fourth-place finisher from District 3, at a site and time to be determined.

“We’re going to enjoy this, and get ready for the next game,’ said Siana. “Coach Polders keeps us focused on one game at a time. There are no big games bigger than others. You just have to go out and be ready to beat the opponent standing across from you. We’re ready, and looking forward to playing in states again.’