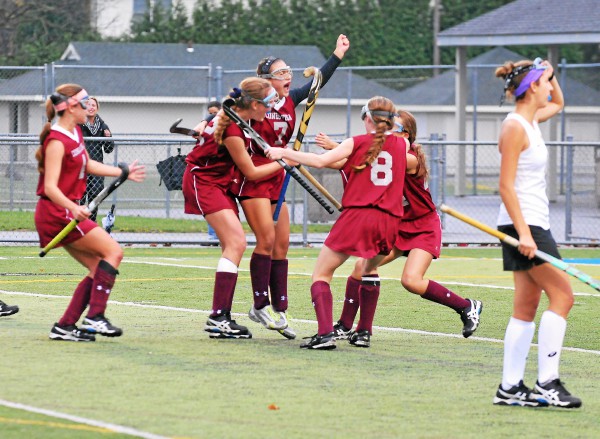 Indeed, the Pioneers have crammed many years’ worth of nerves and tension into the last two seasons.

They wouldn’t have it any other way.

After more than 70 minutes of back-and-forth action on a rainy Wednesday afternoon at Kottmeyer Stadium, junior Casey Allen delivered the game-winning goal off a pass from sophomore Meredith Ross with 2:49 remaining in overtime to send No. 8 Conestoga back to the PIAA championships with a hard-fought 2-1 triumph over No. 4 Downingtown West in the first round of the District 1 Class AAA playbacks. After failing to qualify for states every year since 1986, the Pioneers have now earned back-to-back berths for the first time in program history. They’ll head to seventh-seeded Phoenixville, a 2-1 winner over No. 3 Perkiomen Valley in the other playback, for the fifth-place game on Friday at 3 p.m.

“That,’ Allen said, “was really exhilarating.’

That might be an understatement. Wednesday’s contest was a rematch of last year’s fifth-place game, which the Whippets (15-5-1) won in overtime. Unlike last year, when both teams had already prevailed in an earlier playback round to lock up a state berth, someone was going home after this one.

Appropriately, the game took on a certain tension as it wore on after West’s Becca Inzer and Conestoga’s Natalie Hirst traded first-half goals. Neither team could break through until the Pioneers got a break in the first extra session.

With 4:51 remaining in overtime, a Whippets assistant was ejected after receiving a second yellow card, both for language. As a result, West was forced to play a man down for the next 10 minutes. Conestoga needed only two.

The Pioneers found sudden victory on their ninth penalty corner. Ross took a pass on the right side of the circle and sent the ball over to the waiting stick of Allen, who reared back and fired the game-winner past Whippets goalie Liz D’Ginto with a perfectly placed one-timer.

“It was a great feeling off the stick,’ Allen said. “Great noise and everything. “It was high tension, and we knew we had to get it in. On that play, it can come back to me, or Meredith could take the shot. It’s all about reading the situation. She made a great pass, and I just went for it.’

After Allen’s blast found the back of the cage, she was mobbed by her teammates, who have now made history for a program that had gone so many years without a taste of states.

“It means the world,’ Conestoga coach Megan Smyth said. “This team deserves it. They had a taste of it last year, and I knew they weren’t going to not allow it to happen two years in a row. This was the team that was going to do it, and that’s what we told them before the game.’

Allen said the experience of winning a do-or-die playback game a year ago was crucial.

“It really helped,’ Allen said. “The seniors have helped us through everything, and we know what we’re getting into. We’re very well prepared.’

Senior goalie Chloe Johnson made nine saves for the Pioneers, who kept a clean sheet after Inzer staked the Whippets to a lead just 2:01 into the contest. After that, West was unable to take advantage of its chances, which included six corners after halftime. Still, the Whippets scripted a successful season that included a Ches-Mont National Division title and a trip to the district quarterfinals.

“We had a great season, a great ride,’ said West coach Liz Morrow. “We were top of our division, which was awesome, and were able to make it this far.

“We had our corners in the second half and just couldn’t finish. In overtime we needed to connect and transfer the ball up and try to gain those opportunities, but we had our chances.’