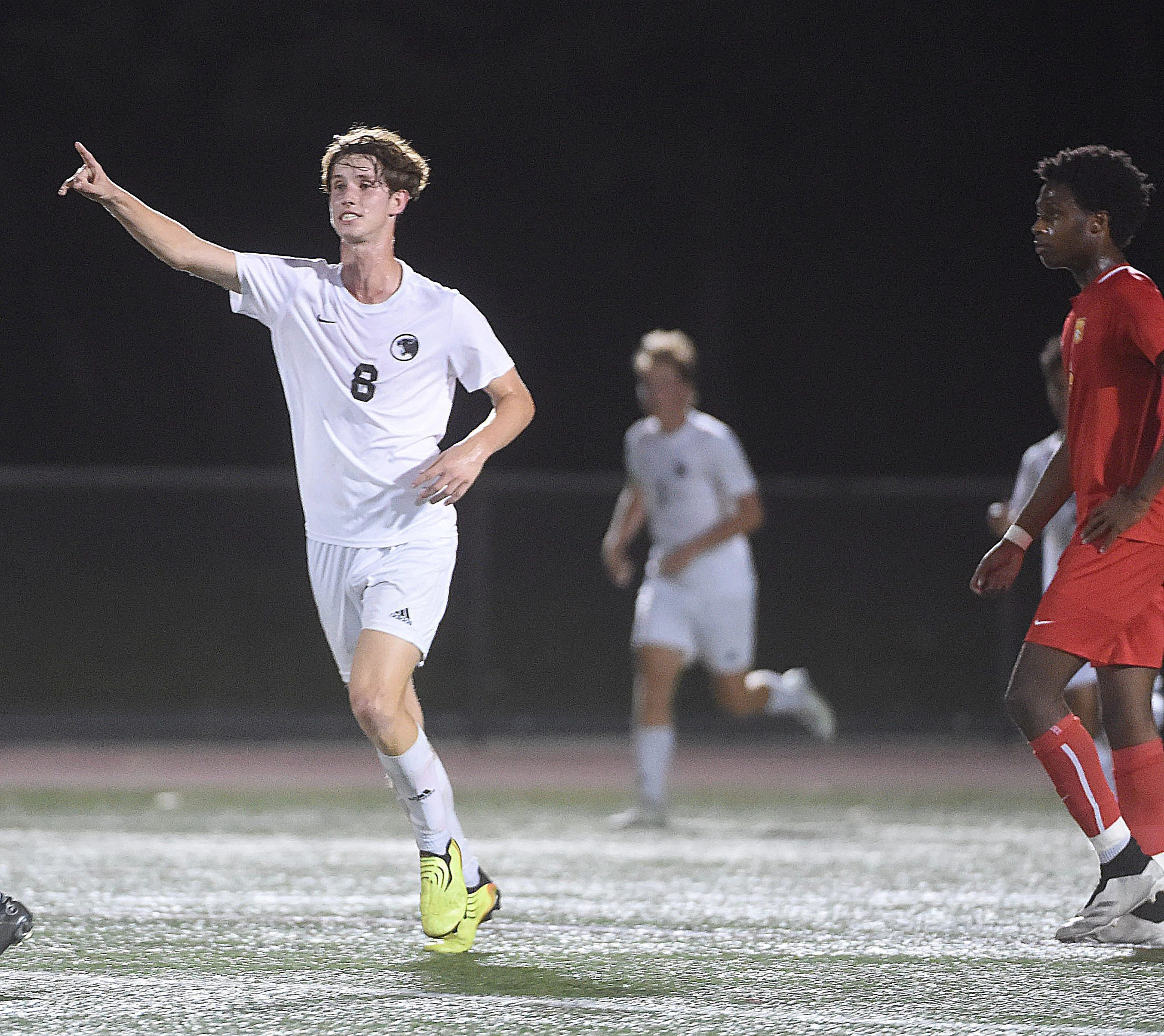 Knowing that Haverford held the edge in midfield playmaking, particularly on home turf, the Panthers went to A.G. Cornog Field to play a high press. The high offside line carried risks, requiring consistent pressure to players in possession trying to pick out passes, and a steep price to pay if they got it wrong.

There was nothing high-minded, however, about how the Panthers sealed the win.

Haverford’s Sean Boyle (8) heads home a goal in the final minute of the first half in Tuesday’s 2-1 loss to Strath Haven. (Pete Bannan/MediaNews Group)

George Pezzeca’s penalty kick in the 68th minute stood up as the winner, but only after the Panthers sacrificed their bodies in a pair of goal-mouth scrambles in the final minute, one off an indirect free kick inside the six-yard box, to preserve a 2-1 Central League victory.

The final minute ran the previous 79 minutes’ tactics through the paper shredder. Goalie Will Hall was whistled for intentionally dropping a ball he’d caught inside the six. The Panthers stacked six bodies on the goal line as first Haverford center back Riley Carr (off Haven’s Connall Strachan), then Owen Mulhern (for Hall’s third save of the night) tried to cannon-blast through the wall.

“Just run at the ball,” Pezzeca said of the complex strategy. “As soon as they touch it, don’t think, just run at the ball. Tuck your hands in, don’t turn, just take it to the face if you have to, do whatever you need to do. It’s really scrappy, and at the end, there’s nothing else you can do besides run and hope.”

Haverford earned a corner, trying to replicate its having scored in the final minute of the first half. But this time, Sean Boyle’s header was toed away on the line by an overhead kick from Nico Taylor.

That chaos betrayed the previous 70-plus minutes of composed, tactical soccer, even if all three goals came off set pieces. For 30 minutes, the game was successfully stalemated by Haven’s press, compacting spaces in the middle of the park and making sure that the Fords’ edge in possession was largely without purpose. The key was the high line kept by a connected backline of center backs Nicolas Dignazio and Jackson Santee, with Taylor and Gabe Broome on the outside.

The quartet has grown chemistry playing club soccer for Nether United, and their gambit of an aggressive offside line requires constant communication and connection.

“We’re pretty comfortable and confident in running it,” Dignazio said. “… Everyone has to step as one. No last man back. If everyone’s not committed, it’ll cost it. But we got in the groove.”

That opened room for Haven to strike first in the 35th minute. Dignazio took a free kick quickly near midfield. He slipped it to Beckett Young, whose ball forward was deflected. But the carom fell right to Andrew Deppen, who looped a 12-yard header into the goal.

Haverford’s response was instant, though it took a little help from the clock. The Fords earned a free kick with 5.8 seconds left, which the referees blew dead in the face of attempted time-wasting by Haven’s wall. That allowed Carr to serve a superb back-post ball that Boyle, the reigning Daily Times Boys Soccer Player of the Year, rose to head home from a sharp angle with eight-tenths showing.

That could’ve given the Fords the mental edge at half. But it didn’t, Boyle surmising that while they coped well with the Panthers’ press, his team didn’t match their energy.

“We just really wanted to be intense going into the second half and feed off the energy of the goal,” Boyle said. “I don’t know if we did that. It was a point of emphasis because we started slow, and we can’t do that again.”

Strath Haven (3-6, 2-3 Central) managed to bottle up the Fords (3-5, 1-3) for much of the second half as well, waiting for an opening to exploit. It came in the 68th, when Simon Muther found space on a counter, cut across the defense and left midfielder Tristan Hevener no recourse but to shove him to the ground.

Up stepped Pezzeca, Haven’s holding midfielder and a junior on a roster with 16 seniors, to calmly slot home the PK, putting off goalie Jack Schlotz just enough to nestle into the corner to the keeper’s right.

“He’s probably a lot more comfortable than a lot of the guys,” Dignazio said of Pezzeca. “He has a lot of experience playing at a high level. We all trust George. It was a little scary, but we all trust George finishing that goal.”

Both teams entered Tuesday trying to remedy slow starts. The Fords’ response, in an effort to return to the District 1 Class 4A tournament, will have to come in despite this performance, Boyle hoping that they “hold themselves accountable.”

The momentum boost is more evident for Haven.

“It’s the most important win of our season so far, and I think it’s going to start something really big for us,” Pezzeca said. “Especially if we can make it to playoffs, these moments are going to be huge to look back on for us.”

Radnor 1, Penncrest 0 >> Jack Ennis scored off a feed from Jacob Shalev for the Raptors. Jake Barber posted two saves to record the shutout.

Delco Christian 4, Plumstead Christian 0 >> Blake Tavis posted a shutout and had an assist, and Griffin Schmitt added a goal and an assist.

Jack Bonner had the second goal for EA while Akira Heath made five saves for his third shutout of the season.