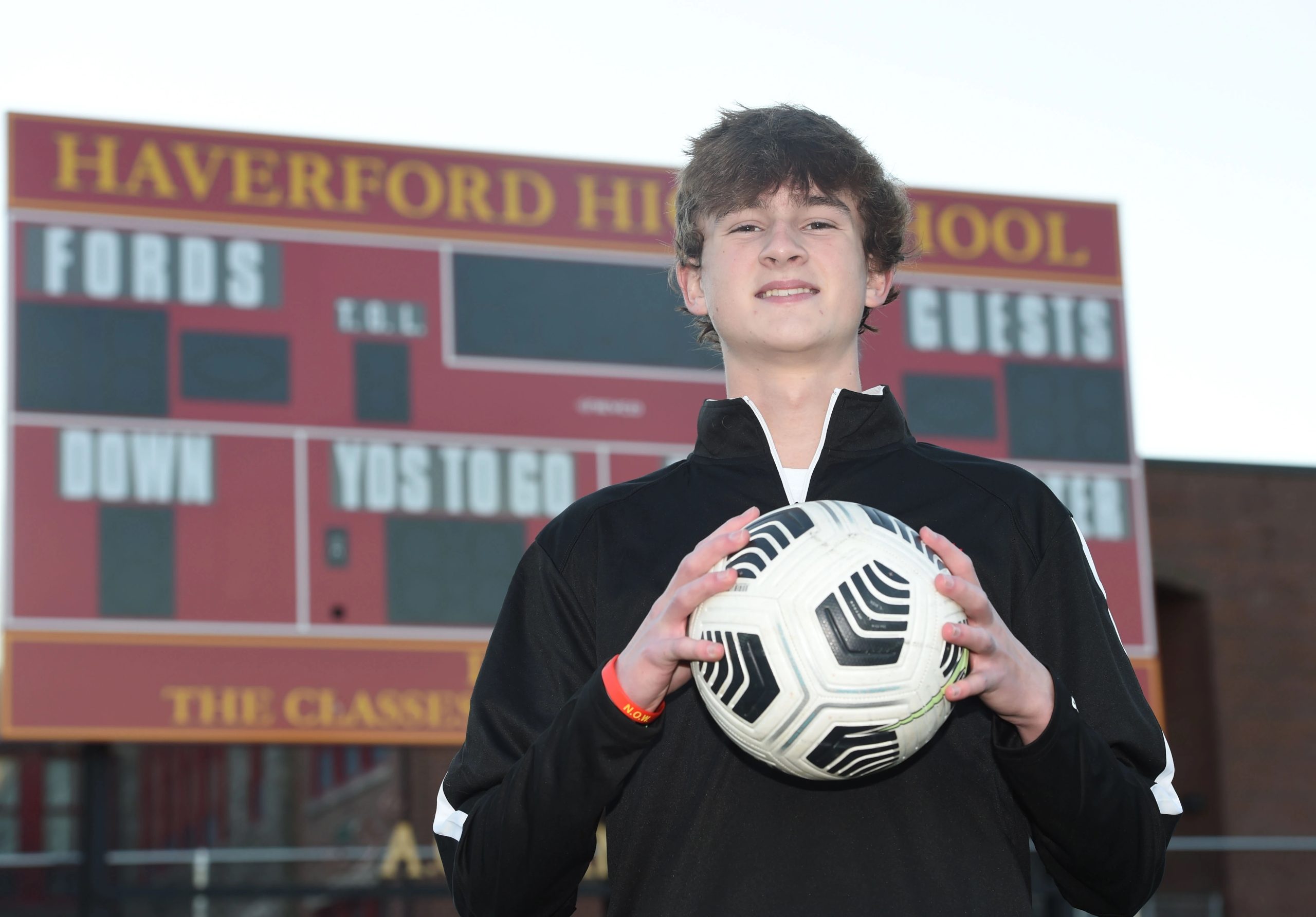 HAVERFORD — Starting the season in midfield as he did, Sean Boyle didn’t have the number top of mind.

It would take time, as September wore into October and as his goals count ticked into double-digits, for the junior to get curious. He queried his coach, David Cassanelli, the last player from Haverford High School to be named the Daily Times’ Boys Soccer Player of the Year, if he might know what the most goals in a season by a Ford was. Ultimately, it took a trip into the digital archives by teammate Googie Seidman to settle on a figure: 20, by George Severini, a two-time All-Delco and 2003 graduate.

Once he had the target to aim at, Boyle – now installed as the team’s center forward – was off and running.

“It was definitely a motivator all season to get it,” he said “But also not just to get personal goals for myself, but I knew that if I got close to that goal, it would be helping the team.”

As Boyle got to where he wanted, the Fords followed. Boyle would score his 18th and 19th goals of the season in the first round of the District 1 Class 4A tournament, a 4-0 romp over Norristown. No. 20 would put Haverford on level terms at North Penn in the second round, before an ultimately heart-breaking 3-2 loss in the final minutes of regulation.

The overlap in Boyle’s and the team’s goals, brought both success. It’s also made him the 2021 Daily Times Boys Soccer Player of the Year.

All picks are first-timers, given last year’s hiatus in fall All-Delcos due to the COVID-19 pandemic. Eight selections are seniors, with three juniors (Bonner, Boyle and Comers) on the squad with the sophomore Cresswell. The All-Delco team is selected in consultation with area coaches.

Boyle’s soccer ascent started in a familiar place for a Havertown resident. His father is Irish, so Boyle began kicking a ball around at age four before climbing up the pipeline from local township club soccer to Penn Fusion. He also honed his skills with the Delco Gaels, Havertown’s gaelic football club.

Boyle still plays at the club, whose alumni include All-Delco soccer players Conor and Sean Bradley of Haverford School and All-Delco football player Jack Donaghy. He credits the physical sport, a rugby-type game with more emphasis on foot skills, with helping broaden his athletic skillset.

“I think it helps with ball control,” he said. “It helps with speed of play. Obviously it’s a lot more physical, too, so I feel like it just is a very athletic sport, high-paced, which can get you ready to play at a more physical level of soccer.”

Any sports in the last two years have been a boon. Last year’s fall was truncated by the pandemic, but even more important as a sophomore was the lack of a late-summer training camp. That chance to acclimate to varsity is immensely valuable, and cutting it short at such a pivotal developmental juncture could’ve been bad.

But Boyle managed to compensate with a strong campaign, and the Fords’ leaders made up for lost time in 2021. Instead of waiting for the summer, they used a window last spring to get on the field, which Boyle saw as the de facto start of the season. With fitness work over the summer and team bonding to tighten an already close group, many of whom had been teammates and classmates since elementary school, the fall arrived with just the technical fine-tuning to do.

“This year, the captains and coaches wanted to really get us going, so we started very early, just training, mostly fitness, so that by the time preseason came around, we could work on technical work,” Boyle said. “I think it helped a lot. We had a lot more preparation, whether it was because of COVID or whatever the year before, we had a lot more preparation which definitely helped us.”

It would take some time to iron out the details. Cassanelli built a sturdy spine to the team, running through center backs Seidman and Devon Runk and the central midfield pairing of Baylis and Max Hartke. With a glut of central midfielders – Okafor Norkeh ended up stepping in to add technical skill to an imposing midfield triangle – Cassenelli opted to move Boyle up top for longer and longer shifts.

The connection with Baylis, who had 16 assists, proved particularly useful as the space between the two players stretched, and Boyle started to bag goals by the bucketful.

“He’s been playing in the midfield his whole life,” Boyle said of Baylis. “He’s very versatile, and he had a very good connection with me, so we knew exactly what we wanted to do.”

Seidman and Boyle are among the minority of underclassmen contributors this season. The offseason reset will force a number of new players to step up. With the sting of the North Penn loss having subsided, Boyle is able to regard the postseason berth as the starting point for next season, using it to fuel the hunger for what comes next.

“Originally it hurt really bad, especially to lose that late in the game,” he said. “It definitely leaves a sour taste in your mouth, you don’t like that outcome. But even just a week after the season, looking back at the season, not only was it a great season and us playing really great for each other, but I think the memories we made in that season were really good. And even though it was a negative outcome and we wanted to go farther, to make it to that point was definitely a major positive that we all could agree was something we all were proud of.”