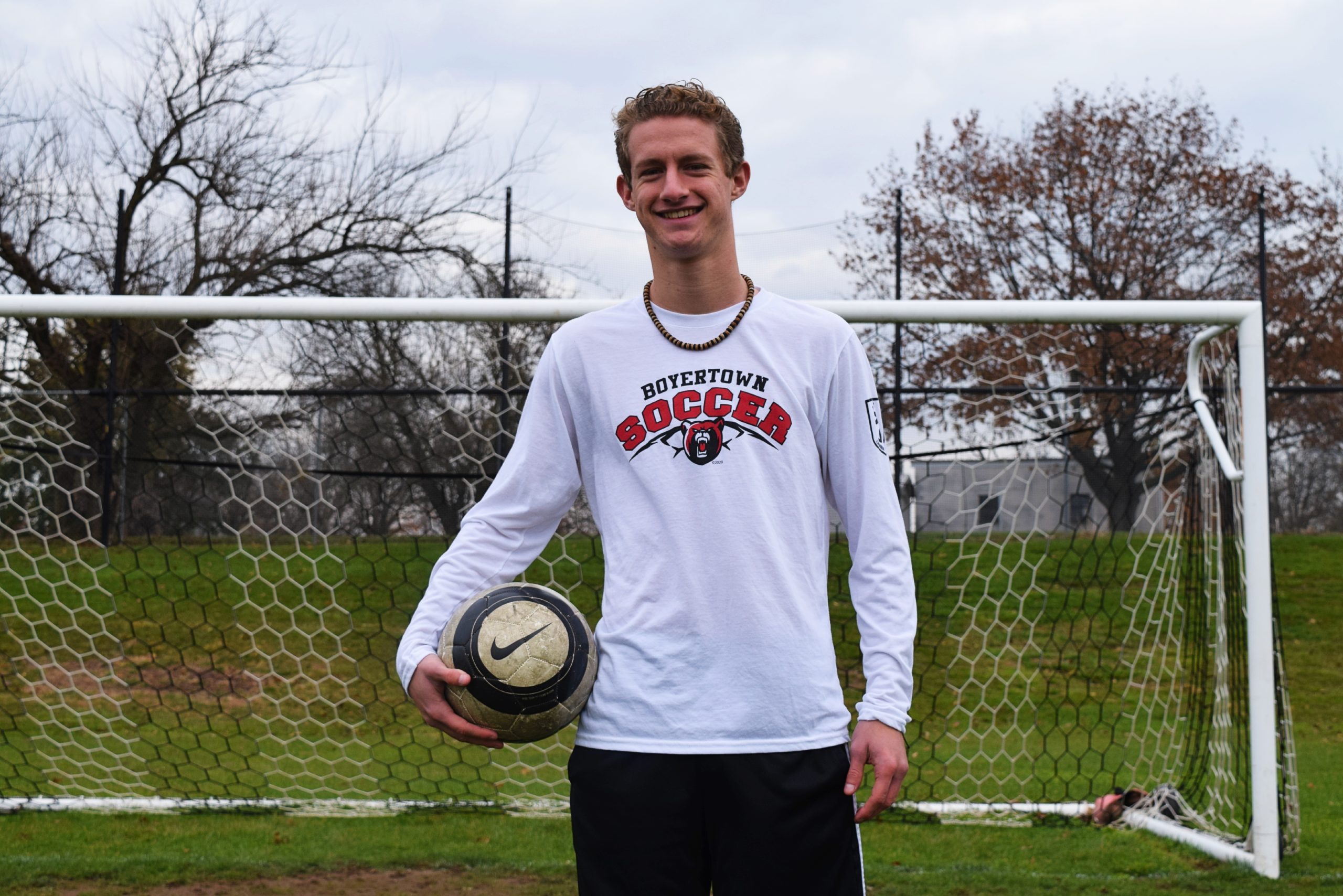 Beckett Wenger is driven by many things. There’s his inner drive. There’s his lineage. This fall there was also the drive of wanting to separate himself as the best player in the area.

Pa. Soccer Coaches Association All-State recognition in 2020 as a junior was substantial, but didn’t give him the singular satisfaction he sought.
The Boyertown striker was joined on the All-State team by Pottsgrove goalkeeper Luke Kaiser, who also took home that marker of singular satisfaction Wenger sought – Mercury All-Area Player of the Year.

“Last year it was mostly between me and Luke Kaiser (for All-Area Player of the Year),” Wenger said. “It was a challenge getting it last year. He was such a good keeper, such a good player. So this year I wanted to come out and prove I could and should earn this award and have the talent to do it. I came out and played as I normally do, played well and I think I deserve this reward.”

There was no denying him Mercury All-Area Player of the Year honors this fall. Wenger proved himself again as the most lethal attacking player in the Pioneer Athletic Conference with a league-best 22 goals and six assists while leading Boyertown to the PAC Liberty Division title, the conference championship game and the second round of the District 1-4A tournament.

Wenger stands alone among that list, too: he is the first area player to twice be named to the United Soccer Coaches All-Region Team, which began in 1997.

“He was exemplary both on and off the field as a leader,” said Boyertown head coach Matt Danner. “Obviously his talent speaks for itself but he is an outstanding young man. He did a lot to keep the team together when we were going through some rough patches. That’s one of the things I’m going to miss most about him.

“He maintained a positive outlook, making sure everybody was buying into what we were trying to do. At times he took the team on his back and willed it, through his play on the field and leadership, he basically carried us to some victories on his own.”

Since last fall when Boyertown won the pandemic-altered PAC title, Wenger was occupied with his PA Dominion 04 team that is ranked top 10 in the country. Over the summer the team was a champion at the U.S. Youth Eastern Regional Championships and advanced to the USYS National Championships in Sarasota, Fla., where it reached the semifinals.

It’s a level Wenger can play at thanks in large part to his two greatest soccer influences, father Brad Wenger and brother Landon.

Brad Wenger played collegiately at Kutztown University and has coached his sons since their earliest soccer days.

“He’s always been really into the game and it’s grown onto me as I grew up, and grown on to my brother as well. That’s really influenced how I play today,” Beckett Wenger said.

“My dad’s been my coach since I was five years old. Him coaching me on the field and my brother and I training in the backyard, going to a field training there, they’ve been really influential.”

Landon Wenger was a leader on the Bears’ PIAA semifinalist squad of 2019 and recently finished his second year (first season due to the cancellation of the 2020 season) with the West Chester men’s soccer team.

The Wenger brothers are each other’s biggest supporters with a side of competitiveness to drive each other on.

“We love each other. Can’t get enough of each other,” Beckett said of his relationship with brother Landon. “Obviously when we were younger it was battling and competition, very competitive with each other. But I think that really helped us be the players that we are now. That competitive nature between us allowed us to be great players.”

With that pedigree, a commitment to Division I Lehigh University and being one of three returning All-Region players in Pa. this fall, let’s just say Wenger was a known commodity.

He was untroubled by the expectations though.

“There was a lot of pressure coming on me this year. Expectations were high for the team itself,” Wenger said. “It was a challenge. It was about getting over that mind battle and going out and playing the way I normally do.”

That play for Wenger entails pace and work rate, an attacking player with great burst to get past defenders, ability to play all over the field, and a tenacity that sees opportunity where others don’t.

While Wenger’s goal tally will garner the most attention, his willingness to play multiple positions – often within a single game – was crucial to the Bears’ success after multiple injuries unsettled the team’s lineup.

“He considers himself a hybrid player and is willing to play anywhere on the field you need him,” said Danner. “I think he excels in an attacking center mid or forward role. He played mostly forward for us until we were struggling in the midfield midway through the year and he dropped in there when we needed it. I think he certainly had the mindset that ‘If I’m going well, we’re going to go well. If we are struggling as a team, I need to step up my game and help everyone out.’”

The Bears struggled to find consistent scoring outside of Wenger all season, which meant reliance on their star.

Wenger’s match-winning potential was on full display: he scored the deciding goal in all but one of Boyertown’s last 11 victories – the lone outlier being the Bears’ penalty shootout victory over Plymouth-Whitemarsh in the District 1-4A first round.

Most memorably was his second-half hat trick in a 3-1 win over Perkiomen Valley in the PAC semifinals, a dominant display from the forward after being ignited by having his penalty kick saved. The three goals displayed his diverse skillset: a marauding run from midfield and powerful finish; a burst of speed and deft touch with a chip of the goalkeeper; and an explosive header on a non-descript ball in the penalty area that appeared to be an easy goalie catch to everyone besides Wenger.

Boyertown was denied a PAC championship threepeat by Methacton on penalty kicks after a scoreless 110 minutes in the league final, an ill-timed scoring drought that plagued the Bears until season’s end in the District 1-4A quarterfinals against Council Rock South.

Boyertown’s 16-7 campaign didn’t feature the hardware the Bears would have set out for. But Wenger did something he set out to do: set a standard that was his alone.

“It’s nice to be someone other people look toward as having a high standard, high expectation,” Wenger said. “I tried to show I could be the person to get us to the next level, get us into districts. This year (didn’t include) states, but I thought we pushed everyone to another level.”