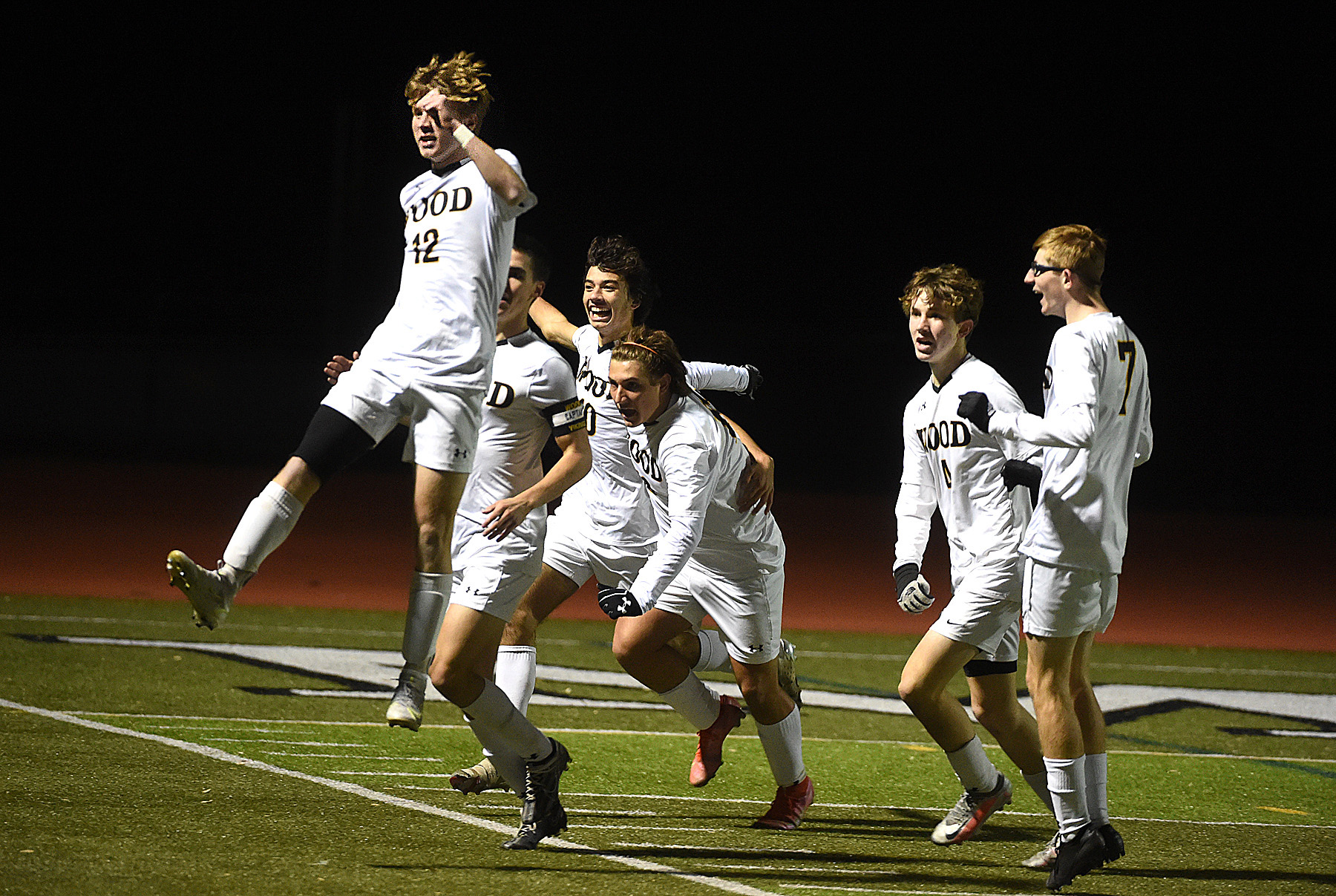 Archbishop Wood's CJ Clyde (12) and his teammates celebrate his first-half goal in the PIAA-3A semifinals against Bishop Shanahan on Tuesday, Nov. 16, 2021 at Methacton High School. Wood went on to win 1-0 to advance to the final. (Pete Bannan/MediaNews Group)

And then, somebody quickly added: “but we’re not done yet.”

The Vikings moved one step closer to earning the program its first ever state title, earning a 1-0 victory over District One Champion Bishop Shanahan in the PIAA-3A semifinals at chilly Methacton High.

“We knew they had solid strikers – (Zane Domsohn) and (Jaden Jones) gave Lou (Daniele) and I a handful back there,” said Vikings senior defender Dom Petruzzelli. “But we had a great game plan. It was a handful. We knew they had four in the back and their goalie was spectacular. But it felt amazing to get one in early and then hold ’em.”

The victory advances Wood to Saturday’s final at 6:30 p.m. at Hersheypark Stadium against either West Allegheny or Hampton. A tremendous season for the Eagles came to a close on the turf at Methacton.

Archbishop Wood’s Braedon Kehan (13) gets the best of Bishop Shanahan’s (9) Michael ZIegler 99) during their PIAA-3A semifinal on Tuesday, Nov. 16, 2021 at Methacton High School. Wood went on to win 1-0 to advance to the final. (Pete Bannan/MediaNews Group)

“Sometimes, the ball just doesn’t go in the back of the net,” Eagles coach Jim Kalavik said. “They’re an amazing group of kids. They’ve done everything we’ve asked. They’re a strong senior nucleus and we got great contributions from underclassmen. They’re like a family and they’re a great group of kids.”

The Vikings struck less than eight minutes into the contest.

C.J. Clyde, who had two goals in the quarterfinal win over North Pocono on Saturday, scored off an assist from Jackson Kiss.

“We probably should have had two or three up there, but just that one in the first eight minutes gave us the energy to get going,” Petruzzelli said. “We have something special going on right now.”

The two teams battled back and forth for the remaining 72 minutes, with Shanahan’s Bryce Domsohn and Wood’s Julian Naumenko making key saves for their respective teams.

Wood clung to its 1-0 lead, its experience in tight contests providing a boost.

“The PCL is probably the best league in the state in my opinion,” Petruzzelli said. “Going against them and knowing we can beat those good teams, we know if we can hang with them, we can hang with anyone.”

“As a sophomore, my fellow seniors and I were here that year and we lost to Strath Haven in the state semis 2-0,” Petruzzelli said. “As soon as we found out we were coming to Methacton, we were like ‘revenge game at Methacton.’ It was a great feeling coming back here and getting that win.”

The pace of the game intensified in the second half but Wood held strong.

“These guys work real hard. We may not be the most technical team all the time but we work hard,” Vikings coach Hugh Kelly said. “From Day One, they came out, never gave up. We had a major disappointment in the PCL Playoffs, losing to Lansdale Catholic. We expected to win and they played to win. And it was a good wake-up call. And I think it really got us back on track as far as states.”

The Vikings march on.

“Nobody has won (a state title for Wood) yet, so we’re trying to make history,” said Petruzzelli. “We are ready to go and we are pumped. With the group of guys we have, and my 11 seniors next to me the entire way, it just feels amazing.”