Conestoga captures District 1-4A title in PKs over Lower Merion 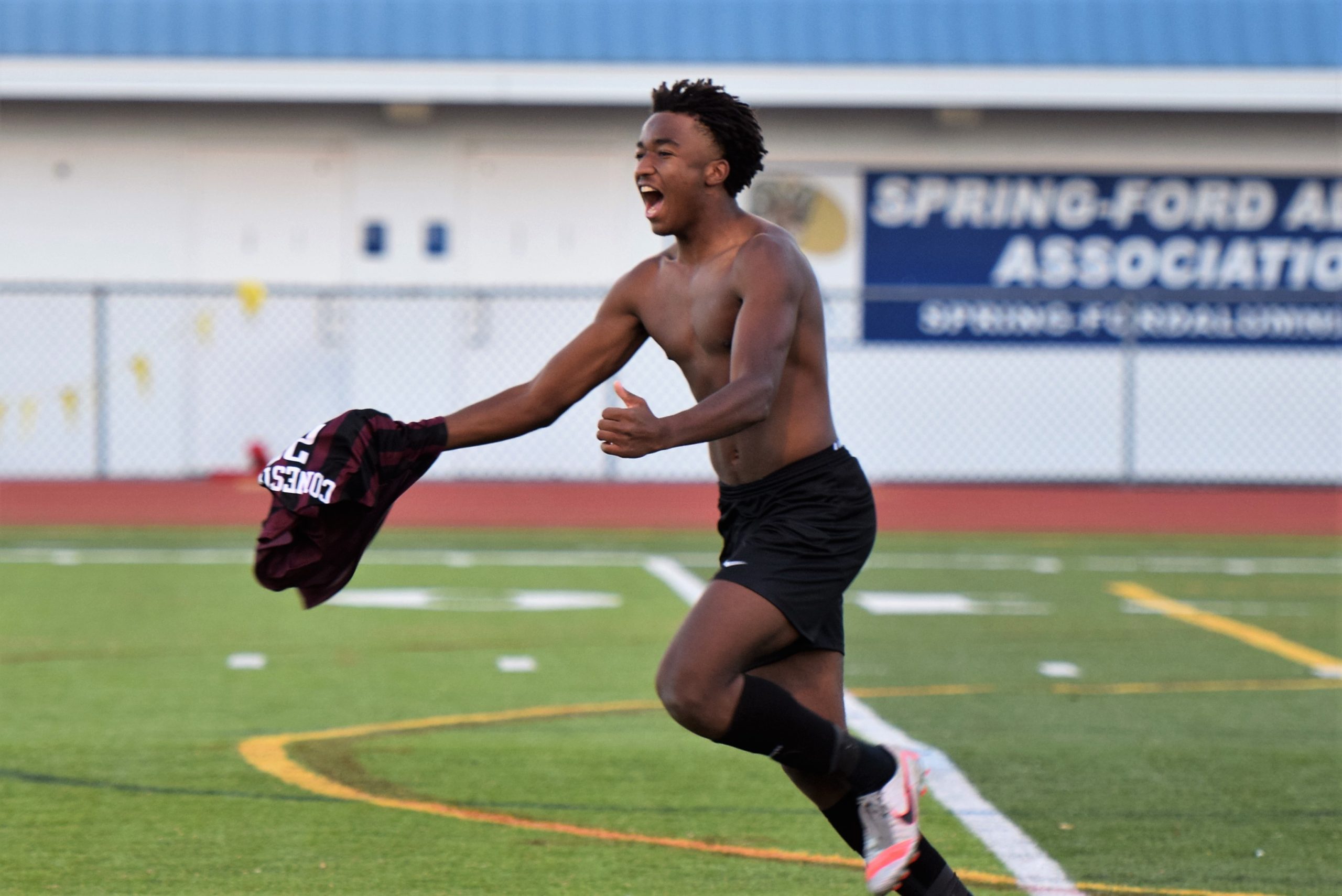 Conestoga's Simeon Dorsey pulls off his shirt after scoring the winning penalty kick to give the Pioneers the District 1 championship. (Austin Hertzog - MediaNews Group)

LIMERICK >> As the sun was dropping along with the temperature at Coach McNelly Stadium at Spring-Ford High School, Conestoga’s Simeon Dorsey had one thought in mind. He was the fifth shooter in penalty kicks after a scoreless 110 minutes of soccer against Lower Merion. If Dorsey scored, the Pioneers would earned a district title.

“Only thing going through my mind was to put it in the bottom of the net and go celebrate with my teammates,” said Dorsey.

He was a man of his word as his goal gave top-seeded Conestoga a 1-0 victory over No. 2 Lower Merion (5-4 in penalty kicks) in the District 1 Class 4A boys soccer championship Saturday.

The session started when Nathan Bradway pulled his attempt wide to give the Pioneers the early advantage.

Conestoga goalkeeper Charlie Smith felt the yin and yang of the cruelest way to decide a soccer game.

“I was very excited when I saw it go wide, but I felt a little bad for the Lower Merion player,” said Smith.

AJ Nordone stepped up to give Stoga a 1-0 lead. Luke Vaughan followed for the Aces (21-2-1) and scored to tie it. Sebastian Tis smashed home his attempt for a 2-1 lead.

Thanos Daniilidis beat Smith to level the score again. Colin Wurth gave fans a nervous moment as Michael O’Gara guessed right, diving to his left. He got his fingertips on the ball, but couldn’t keep it out of the net.

On the fourth round, both Reid Joseph and Kole Wintersteen smashed home their kicks to send it to the fifth round with the Pioneers up by one.
Spencer Rosenbaum was pinpoint accurate before Dorsey wrongfooted O’Gara to set a wild celebration.

“We practice them (penalty kicks) every practice,” said Conestoga head coach David Zimmerman. “When we started the playoffs, we had them do a confidence rating from 1-10 to see who wants to step up and take one. We winnow it to five and do it every practice.”

Conestoga won its third district title and first since 2017.

“Ironically, winning a District 1 title is more difficult for us than winning a state title,” said Zimmerman. “We have four state titles and this is our third district title.”

The two Central League foes – Conestoga won 3-0 the first time they played the Aces in October – played an even first half. The high-powered Stoga offense was held to just two shots in the first 40 minutes. They did force the best save of the period when Tis took a free kick from 22 yards out and O’Gara dove low to his right and knocked it away.

“It was a very exciting game between two very good teams,” said Lower Merion coach Nico Severini. “Both teams had some upswings and some downswings, but that’s soccer. We’ve been extremely even in these types of games, so we knew it was going to be a tight game. We had our chances, but couldn’t get the ball to go into the net.”

Conestoga didn’t take long to state their intentions after the break. The Pioneers had a shot in the first 30 seconds and had five shots in the opening 10 minutes. But, the defenses were sturdy and off they went to overtime.

Both teams had golden chances in the extra session.

First a long throw by Lorenzo Vargas-Clark, who wowed the crowd all game with his long throws, bounced around in the box, then a header went toward the goal but was cleared off the line by Bradway.

On the other end, Lower Merion was dangerous on a long throw of its own. Justin Poles directed a header that hit post low on the left side, and the drama was turned up another notch.

The Pioneers will face the third place team in District 3 on Tuesday, while the Aces will take on the second place team from District 11 as the PIAA state championship tournament begins.

“It says something about our league, we have the two district finalists,” said Zimmerman. “I think we have the best league in the state and we’ll both represent the league in states. I hope Lower Merion does well, I would love to play them a third time.”