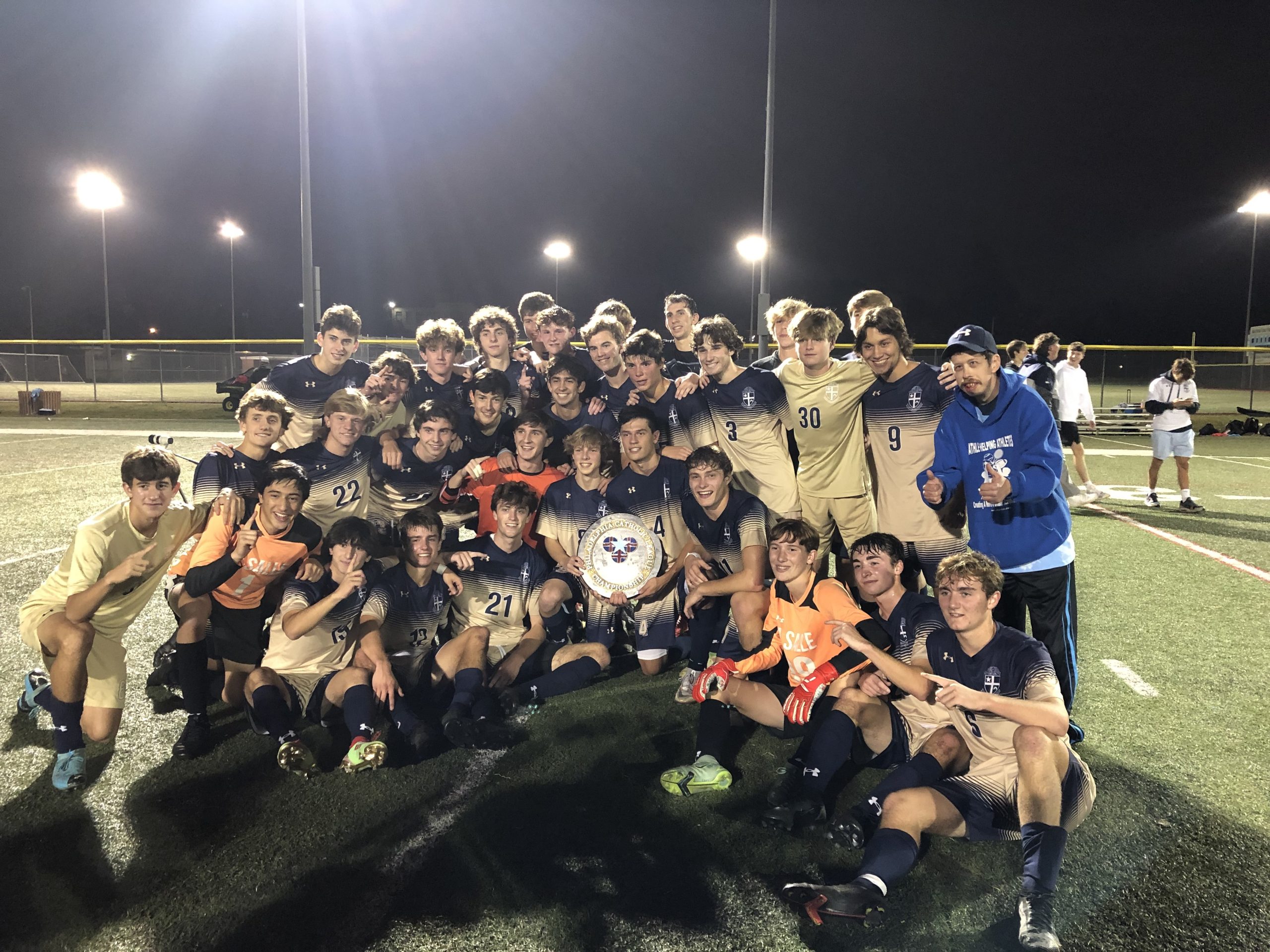 It’s the mantra La Salle’s soccer program tries to play through with nonstop movement on and off the ball and an unselfishness that may at times go too far, but the idea is simple enough that if someone is there, give them the ball then keep on moving. It’s also a demanding style, one that requires high fitness, intensity, effort and resolve and all were apt descriptors for Saturday nights’ PCL boys’ soccer championship game against Father Judge.

After 80 minutes of absolutely stirring theater, it was the Explorers enduring the final 10 minutes to emerge with a 3-2 win over the Crusaders in a superb match played at Ramp Playground for the program’s fourth PCL title since 2016.

“This senior class is huge, I’ve had the chance to play with them since I transferred in sophomore year and it means a lot to all of us,” La Salle senior midfielder and PCL MVP Sean Jennings said. “What a way to go out.”

There was no PCL title game in 2020 due to the COVID-19 pandemic altering the schedule. Judge didn’t even play in the fall of 2020, so both sides were eager to get back on the pitch with a chance to lift the hubcap trophy at the end of it.

“I thought, this is my last go with these guys and it’s for the championship,” Explorers energizer Seth Michalak said. “It was a mental game, it’s really mental with this ankle, it’s been a long four weeks playing through the injury but this makes it all worth it for sure.”

Michalak didn’t look hurt or slowed by the nagging injury and was a man possessed in his play, epitomizing that constant movement mantra La Salle strives to play with. It was his run down the left, complete with a vicious cutback, that led to a perfect cross into the box that senior Jake Barton headed home for the eventual game-winner with 8:27 left in regulation.

Barton was no slouch either, scoring two goals in his last Catholic League performance and got the Explorers on the board in the first half on pure effort. With Judge goalkeeper Bobby Mulvenna, who was phenomenal between the posts, thwarting everything coming his way early, the Explorers needed a hustle play. Hayden Grosso served in a beautiful cross to the far post where Barton sold out on it, sliding in for the finish.

“We knew if we came out with as much energy as possible, we would absolutely win this game,” Barton said. “All this year, it’s been about teamwork and playing for each other. You play for the guy next to you, our mentality has never changed and it’s been that same way all year.

“Especially for the seniors, it’s our last year and we have to make it count.”

La Salle continued its recent run of excellence in the league, adding to PCL titles in 2016, 2017 and 2019. Coach Tom McCaffery also made note to credit the football team’s PCL Red Division championship earlier in the day, which he and many of his players attended before heading down to Ramp to try and get one of their own.

Mulvenna’s heroics kept La Salle to just a 1-0 lead at break. Barton, who has played against the Judge senior in club, had nothing but praise for Mulvenna and the entire Crusaders team’s effort and both teams shared sincere congratulations in the handshake line after the final whistle.

Ramp Playground is Judge’s home field and the Crusaders weren’t going to go down without a fight. The game, played in front of a packed house, more than delivered and the second half was a display of guts and fortitude from both sides.

“It was a good one, it was fun to be a part of,” McCaffery said. “Both teams answered and found a way to dig and get some goals in. Look at the way they hung in there and battled us. Bobby had a great night, stood on his head at times and made it look easy with the way he kept us out but fortunately, our guys kept shooting.”

There wasn’t an ugly goal in the lot, but Judge’s John Wood had two absolute stunners in the second half to give his team a massive lift. The Crusaders defender tied the game early in the second half when he bent a corner kick in at the far post for a shock goal that got the mass of Judge faithful right back into the game.

Wood again came through as an equalizer, leveling the score 2-2 on a brilliant free kick around a La Salle wall with 16:42 left in the game.

Judge didn’t have an overwhelming amount of chances, but a team’s level of danger isn’t always counted by shots. La Salle’s defensive unit was more than aware of that and it was an all-out effort on the back end as well to break up passes, win contested balls and boot any threats clear as soon as possible.

The PCL boys’ soccer trophy gets hoisted into the air as La Salle players celebrate around it.

“It meant everything,” La Salle senior defense Jake Yuskevich said. “As soon as we got that last goal, I told everyone ‘sell out for every ball.’ We had to see it out, we were going to do whatever it took to get the ball out and close out the game. We’ve been here before, we know what it takes and I’m just really proud of all the guys.”

In between Wood’s two tallies was another goal that encapsulated the value of moving the ball. With three defenders buzzing through his airspace, Jennings left a short pass to Michalak who opted to play it quickly to Sam McShane.

The senior brought down the ball toward the net, got his hips around and ripped his next touch past Mulvenna and into the net for a 2-1 lead.

“It means the world, I couldn’t have asked for a better experience helping my team achieve this great goal, yeah, there’s nothing better,” McShane said. “I have the confidence in my teammates that they’re going to make the right decision so when they have the ball, it’s all about getting to the right spot and trusting they’re going to get it to you.”

La Salle almost scored right after Judge tied it a second time on the most chaotic sequence of the game. Tim Madden, the semifinal OT hero, clocked a shot off the post, a second shot was blocked by a Judge defender, the third broken up as it left an Explorer’s foot and finally a fourth attempted headed out of play.

Jennings, a started on the 2019 title team, chalked up La Salle’s ability to just coming back with more to the program’s culture built up every day behind the scenes. The senior, off to Penn next year, wasn’t as much of an offensive threat as usual but he was more than content to sit back, win balls in the air and be a disruptive presence as much as he was a facilitating one.

“It’s chemistry and repetition, practicing five times a week for three or four years, I love all my teammates and feel I have great chemistry with every single one of them,” Jennings said. “Credit to McCaff, he has the starters and backups always prepared so anyone is ready to step in and contribute.”

Madden had another effort saved by Mulvenna in the lead up to the go-ahead goal but with every denial, the Explorers just kept pushing.

“It wasn’t just (Mulvenna), their whole defense played great so we had to have that mindset of ‘it’s whatever,’ it was in the past and once he robbed us a couple times, it turned into ‘let’s get the next one’ and we stayed focused on getting the next goal,” Michalak said. “It’s soccer, you know, we have a good half and you expect they’re going to battle back as hard as they can. It’s the PCL final, we just had to match the intensity and every time they beat us, we had to overcome that.”

As he was making his way down the flank and leaving that defender helpless to recover, Michalak spotted Barton putting his hand up in the center of the box. For the good of the team, Michalak gave up the ball.

“I saw the ball go wide, so I ran straight in hoping the ball would come back in, as it did,” Barton said. “I just had to line it up with my head, I knew the goalie would be off-balance so I just placed it and hoped for the best.

“Seth’s been my best friend for a while now and we play great together. He’s a special player and a better guy. You give him the ball and you know it’s coming back in a great position to score.”

Up next is the District 12 title game and if all goes well there, the state tournament. With 15 seniors on the roster, the Explorers hoped Saturday’s scenes were part of a final act just getting started.

“We won’t know what the impact is until we’re done the run and hopefully if things go well, it’s a really big impact,” McCaffery said. “Right now, what they’ve done is shown they can find a way to get wins in different ways. That’s the thing with these guys, they’re not locked into one way of doing things, they adapt to the game and find ways to get it done.”