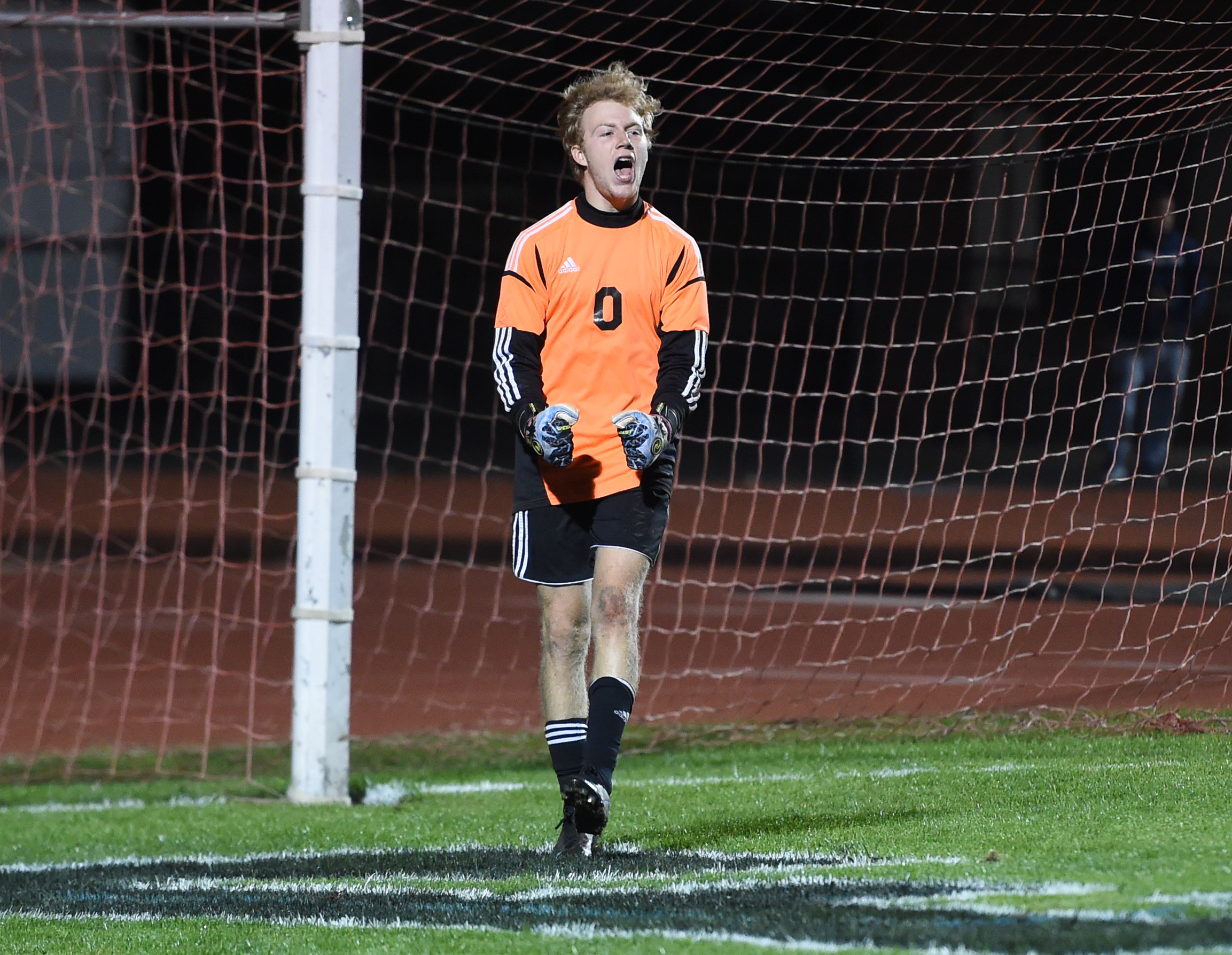 BOYERTOWN >> It’s a mixed bag, the shootout in soccer.

Two teams play each other tough and even for 80 minutes of regulation time, and another 30 in two overtime periods. Their reward? To have a game decided by how many one-on-one pairings of shooters and goalkeepers a team can win.

Boyertown and Plymouth Whitemarsh faced that scenario Thursday in their District 1-AAA second-round playoff game at Memorial Stadium. Fate smiled on the Bears, who came away with a 1-0 victory off a 4-2 advantage in PKs.

The difference proved to be Luke Moser and Justin Patten converting the Bears’ third and fourth shots while similar attempts by the Colonials’ Adam Conti and Luke Edwin hit off the crossbar. The teams were all even through the first two rounds, Chase Bartman and Beckett Wenger hitting for Boyertown while Joe Redmond and Mason Clatterbuck did the same for PV.

“I knew we could make all five,” Boyertown keeper Nick Rothenberger said after seeing his team (14-5) face a shootout situation for the second time in a week. “I had confidence.”

BSOC: Save of the night from Boyertown’s Nick Rothenberger. Keeps it tied with 20 left in the game. @AustinHertzog pic.twitter.com/MLyOgwXsv9

Rothenberger’s stalwart play in goal, matched by PW’s Daniel Small, was a big factor in the 0-0 result through 110 minutes of play. Their sparks ignited heady defenses that turned downfield drives, corner kicks and shots at goal into empty opportunities.

“Everyone had chances. Wonderful chances,” Colonials head coach Rich Kessler said. “It was fated to go to shots. It was a totally even game.”

Boyertown’s Ryan Goffice, left, and Plymouth Whitemarsh’s Dean Allen get tangled as they battle for the ball Thursday during a District 1-4A playoff game. (Owen McCue – MediaNews Group)

In the first half itself, both teams had three corners apiece. The main difference was sixth-seeded Boyertown (14-5) with two saves and 22nd-seeded PW (10-8) with none.

Another difference in the Colonials’ favor was a change in their game plan, one that differed from what was shown in scouting reports.

“We expected to see one thing,” Boyertown head coach Matt Danner said, “but then they played a five-man back line.”

That thwarted numerous attempts by the Bears to get passes into their star player, Beckett Wenger, to finish goals. Multiple-player coverage kept Wenger from completing those chances.

“They played aggressively in the middle, too,” Danner added. “They switched field rapidly and overtook us in situations. An inability to finish has been a problem for us all year.”

Rothenberger had one particularly dramatic save in regulation time, a lunging stop of a shot during PW’s pressure at the Boyertown goal between the 23:28 and 22:22 time frame. The Colonials had three chances in the first OT; one was covered by Rothenberger, the others ended by shots over or to the left of the goal.

On the PKs, Rothenberger noted not being immediately aware of the shots that hit the net frame.

“When I turned around to see where the ball landed, that was a bit of relief,” he said. “The higher they go, the harder it is to get them.”

It did offer the Bears a measure of vindication from the Pioneer Athletic Conference’s championship game with Methacton, where they had the opposite fate. The shootout phase went seven rounds, with the Warriors prevailing 7-6 to win the league’s title.

The result was Boyertown qualifying for Saturday’s quarterfinal round, where one more win will guarantee them a berth in the PIAA 4A tournament.

“I think we had the top three chances,” Danner said. “They had speed up top and created difficult situations.”

PW, in turn, heads home for the season after its intense finale with the Bears … one made even more intense with Boyertown having to play a man down after being assessed a red card at 7:36 of the second OT.

“The kids battled their hearts out,” Kessler said. “I’m proud of everybody. This is going to take some time to process, then we’ll see what it turns into.”

NOTES >> Boyertown had one promising chance in the second overtime, one generated by a Kegan Foster fast break around the 13:03 mark. It attempted two corners and two throw-ins on the possession, only to see PW weather the onslaught unscathed. … The Colonials made one break, a corner and another shot in the final four minutes of the second OT, but fared in similar fashion to the Bears’ earlier chance.