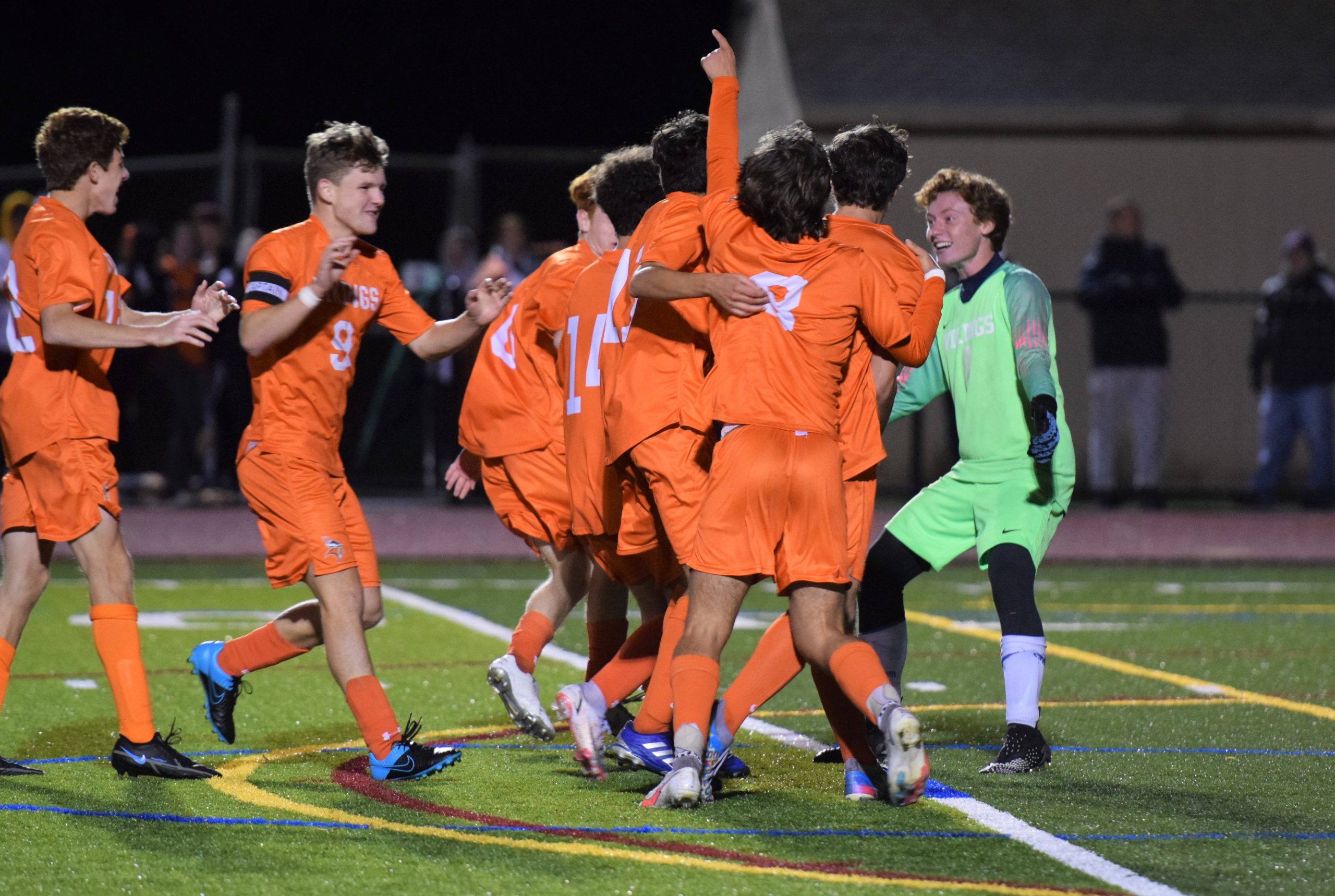 And the newest entry, the Perkiomen Valley boys soccer team.

Because if Tuesday night’s District 1 Class 4A playoff game against Methacton were a horror film, the Vikings’ supernatural ability to come back from the dead would place them on the level of the legends.

Methacton will be seeing Perk Valley in their nightmares after watching a three-goal first half lead and two-goal lead with 11 minutes left undone by the undead.

“Crazy win,” said Witkowski. “We felt like we had to leave it all out there.”

Witkowski, a senior center back, scored the decisive Round 5 penalty kick after makes from teammates Owen Love, Sean Schoeniger and Adam Natoli. Methacton’s successful tries in PKs came from Zach Willen and Otto Hull, but the Warriors could not replicate the PK glory they found last week on the way to winning its first PAC championship.

Perk Valley’s Sean Schoeniger, facing, is congratulated by teammates Owen Love and Javier Schorle after tying the game 5-5 against Methacton during their District 1-4A playoff game on Oct. 26. (Austin Hertzog – MediaNews Group)

The final scene saw Perk Valley (12-7) rushing toward their supporters victorious, rewarded for never saying die despite trailing 4-1 entering the final minute of the first half and by two nearing the final 10 minutes of regulation.

“That was a very easy situation where they could have given in or turned on each other but they responded and showed a lot of integrity and heart and I’m very proud of that response,” said PV coach Zach Allen. “The seniors lead by example and we want them to try to embrace the adversity to test their character. They showed their mettle. Everyone works as a team and they have that intangible quality to keep pushing through tough times.

Familiarity bred contempt considering Methacton (11-8-1) was the lone team to beat Perk Valley on its home field this season,  a 3-2 win on Oct. 14  that saw the Warriors clinch a PAC Final Four spot.

“It’s our home field. They were the only team that beat us here. We wanted redemption,” said senior midfielder Owen Slack, who had a goal and assist and was the engine of PV’s comeback effort. “They’ve been talking after coming off the PAC championship. They thought they were going to come in here and blow us over.”

Methacton did over the first 36 minutes of the outrageous 10-goal regulation time that saw PV dig out from destruction a handful of times. The Vikings trailed 2-0 on early Methacton goals from Graham Halfpenny and Brayden Ahlum within the first 12 minutes. Despite Luke Hansen giving PV sign of life 12 minutes later, the Warriors answered with back-to-back goals created by Braden Kavanagh – a 23-yard shot just under the bar followed by a fizzed end line cross knocked in for an own goal –  in a 70-second span for a 4-1 lead.

But PV found a pulse when Owen Slack stole the ball and carried it from beyond midfield on a counterattack and played in Javier Schorle for a one-time finish with 3 seconds to halftime to get within 4-2.

“When you get a momentum swing that big, it’s hard to stop it,” said Witkowski, who is the son of longtime Pottsgrove coach Jay Witkowski.

Perkiomen Valley’s Ethan Witkowski pokes the ball away before Methacton goalkeeper Steve Remish can handle it inside the penalty area during their District 1-4A playoff game on Oct. 26. (Austin Hertzog – MediaNews Group)

Even with a halftime break to negotiate, PV did carry over the momentum in a convincing second half that was rewarded when Schorle dumped in a cross by Love with 26 minutes to play.

The comeback dream appeared dashed when Methacton rebuilt a two-goal cushion at 5-3 when a Hull backheel played in Matt Weber with 21:51 remaining.

After trading great scoring chances – Willen hit the crossbar for the Warriors while a Schorle-to-Love counter narrowly chipped over the bar – in a game filled with them, Natoli’s long sideline cross was headed in by Slack with 10:44 to play. Less than two minutes later, Ben Watson crossed for Schoeniger who hit the tying goal for 5-5 with 9:14 to play.

Methacton’s Braden Kavanagh wins a header in the PV penalty area during their District 1-4A playoff game on Oct. 26. (Austin Hertzog – MediaNews Group)

PV held the momentum and had the better of the attacking play through the end of regulation and into overtime, in stark contrast of the way the Warriors bossed the game in the first 40. But the best chance of overtime was Methacton’s when Hull’s recycled corner kick was headed off the crossbar by Willen.

As penalty kicks approached, Methacton looked the favorites considering it was twice winners via shootout last week in wins over Upper Merion and Boyertown in the PAC title game last Thursday.

“We thought otherwise,” said Witkowski. “We made sure to watch the film to see what way they were shooting and we practiced multiple times and we knew our order, our spot and hammered them away.”

Perk Valley hadn’t even played an overtime contest prior to Tuesday.

“We knew penalty kicks were a possibility,” said PV coach Zach Allen. “I went over to Dave (Methacton head coach Dave Stevenson) joking around before PKs and said, ‘You lured us into your trap! Just as you planned it out.’

“We have a lot of senior leadership – four out of five of our penalty takers are seniors and they stayed composed. We have the utmost confidence in them and they were able to come through in the big moment. They wanted this game, wanted to play on this field perhaps the last time we’ll put our trust in them. We’ll ride and die with those guys.”

NOTES >> No. 12 seed Perkiomen Valley’s season lives on with a trip to No. 5 Abington in the second round Thursday (7 p.m.).  … While Methacton’s season ends, the Warriors achieved a number of firsts in their 11-8-1 campaign by qualifying for the PAC Final Four for the first time and winning its first championship on Oct. 21. Its senior class includes Halfpenny, Hull, Remish, Weber, Eddie Carbajal, Aidan Cleary, William Orcutt and Michael Willen