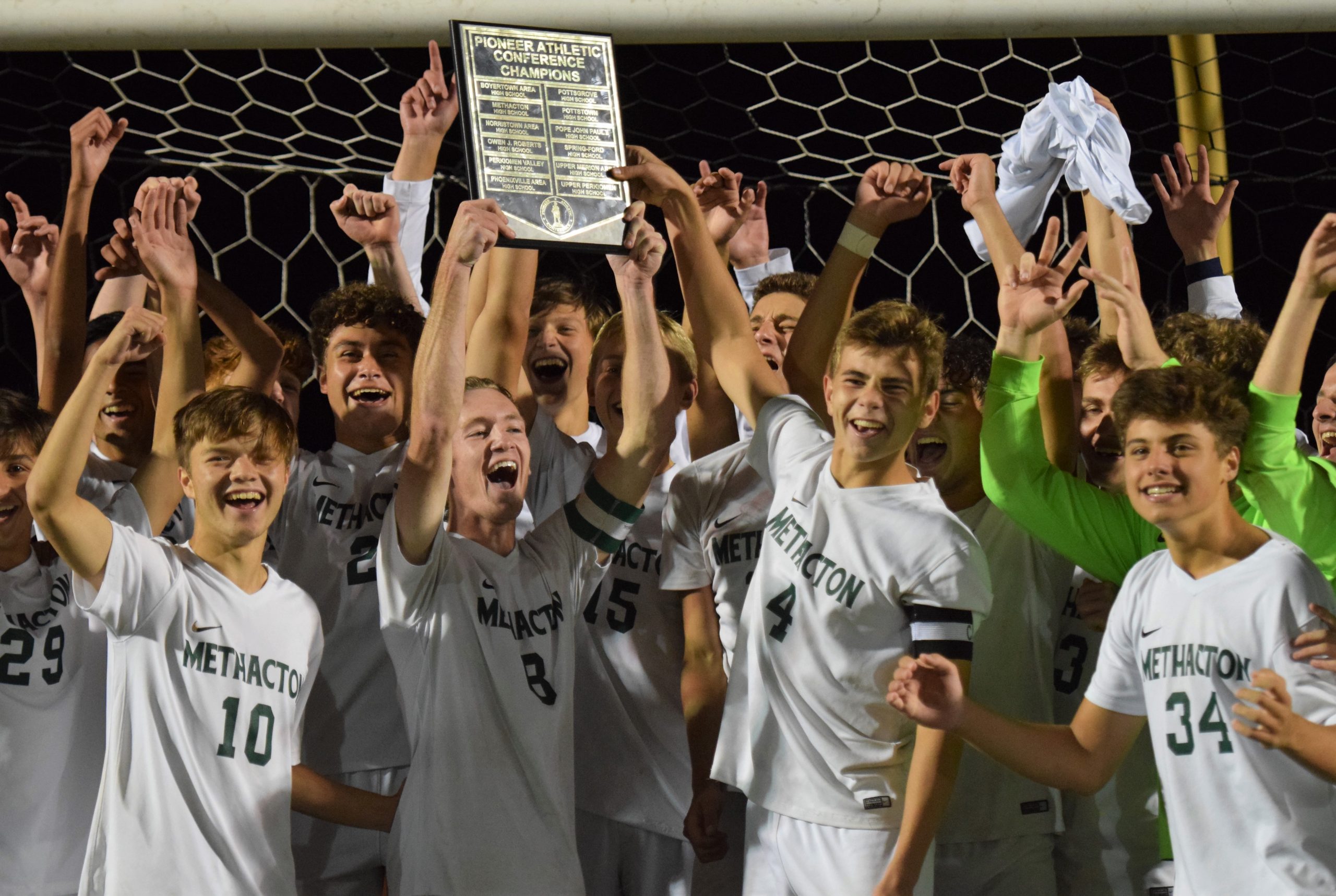 BUCKTOWN >> Methacton boys soccer head coach Dave Stevenson had an important thought before Monday’s practice. In the Pioneer Athletic Conference playoffs for the first time, his Warriors should prepare for the unexpected.

“Coming into practice on Monday, I was like, ‘We need to spend some time on PKs,’” Stevenson said.

“You never know what’s going to show up.”

Words to live by. Words to celebrate by for the Warriors.

After holding Boyertown at bay for 110 minutes through a scoreless regulation and two overtimes, Methacton came up with the goods again in a penalty shootout, scoring all seven of their spot kicks to defeat Boyertown 1-0 (7-6 on penalty kicks) to capture its first PAC championship Thursday night at Owen J. Roberts.

It was Methacton’s second straight game of coming up clutch in PKs after defeating Upper Merion in penalties two nights earlier. “Never in my wildest dreams,” was Stevenson’s description of having both PAC playoff games end with shootouts.

Junior midfielder Lucas Capelini struck the decisive spot kick after senior goalkeeper Steven Remish made the shootout’s lone save in the 7th round.

“At first I was nervous, but when it was my turn to step up – I was dreaming about this moment all day at school,” Capelini said. “I wanted to make it, take my shirt off and go into the crowd, just like I did.”

“It made us more confident,” said Capelini of advancing through penalties just two days earlier. “We knew we could win in (PKs). Everybody that stepped up was calm and ready to take it.”

“I’m elated. I’m overjoyed. I’m so proud of what these guys have done tonight, so proud for the Methacton community,” Stevenson said. “It’s been a long time coming. It was done with a whole lot of passion.”

The Warriors (11-7-1) weren’t just opposing the two-time reigning champions in Boyertown (14-6), they were facing a mountain of history against them. Methacton had never reached the PAC Final Four, spending most seasons as a Liberty Division also-ran, and was 2-20 against Boyertown in the past decade.

After going 4-8-1 in 2020, senior center back and captain Graham Halfpenny didn’t anticipate things would be different this fall.

“I would have never told you we’d be here before the season. Me and Otto would talk (in the offseason) and I was like, ‘We’re gonna be so bad next year.’ But he said ‘Nah, we’re gonna be good. Trust me.’

“But when we started playing, and I said after Boyertown (3-2 loss on Sept. 14), I truly believed we would be playing here. I don’t know why, but everything just really clicked.”

It hasn’t been all roses this season for the Warriors, but since their 5-3 loss to Norristown on Sept. 28 that prompted a team meeting they’ve been a renewed bunch and more clutch than any previous Methacton side.

“All the other years people doubted us, that we wouldn’t be good, but our chemistry is better than any other team I’ve seen at Methacton,” Capelini said.

“All the personalities on the team really mix well,” Halfpenny said. “Dave (Stevenson) and Liam (Woods, assistant coach) really pushed hard this year making sure we knew our tactics. Everyone’s work rate has been so good this year. We never get beat out on effort.”

That needed to be true and then some against season-long league favorite Boyertown. Their quick-passing style that builds from the back needed to be its sharpest against the Bears’ physical counterpressing and direct approach.

Things opened up in overtime, largely in the Bears’ favor. Senior All-State forward Beckett Wenger, who was the likeliest player to score all night, was denied a penalty kick four minutes into OT, then had a 1-on-1 chance saved by a quick-closing Remish a minute later. Adam Becker then struck the crossbar 10 minutes into OT.

The chance of the game came with 2:50 in the first OT with Kegan Foster crossing to Bartman, who rolled his shot toward the left corner but Remish made an outrageous save to get low and parry away.

Zach Willen had the Warriors’ best chances early in double overtime from the doorstep but Rothenberger closed and smothered the shot while he also blistered a shot from the right to the near post but was saved.

Penalties became ordained in the final minute of double OT when a long free kick was tipped by Remish off the bar and back toward the goalmouth but Halfpenny frantically cleared off the line before a Bear could get a touch.

“Hat’s off to Boyertown. Steven kept us in the game with a bunch of huge saves and we just played very well together and were able to shut down most of their attacks and have a few decent ones ourselves,” Stevenson said.

Boyertown goalkeeper Nick Rothenberger closes fast on the ball before Methacton’s Zach Willen can get off the shot. (Austin Hertzog – MediaNews Group)

Suddenly when it became a penalty shootout, Methacton almost became the favorite with its positive energy and belief. Heck, even history – albeit recent – was on their side.

For his part, Remish hadn’t fully come down from the match even during the celebration with teammates, family, friends and the PAC championship plaque.

“I’m feeling a lot of different things: happiness because we just won the PAC final, but definitely stressed out. That was a lot to handle,” Remish said. “Especially in PKs. It came down to the seventh one as both teams kept scoring and that definitely put a lot of not great thoughts in my head.

“But I saved the last one, Lucas finished it and the rest is history.”

NOTES >> Boyertown injured senior Matt Selders started the game in honorary fashion before quickly being subbed out. Selders has been a starter since the Bears’ 2019 PIAA semifinal team … It was the third PAC boys’ final to go to PKs, joining Spring-Ford over Perk Valley in 2013 (0-0, 4-3 PKs) and Boyertown over OJR (1-1, 3-1 PKs) in 2015. … Boyertown is currently ranked No. 5 in District 1-4A. Methacton is ranked No. 20. PAC playoff games do not count toward district placement.