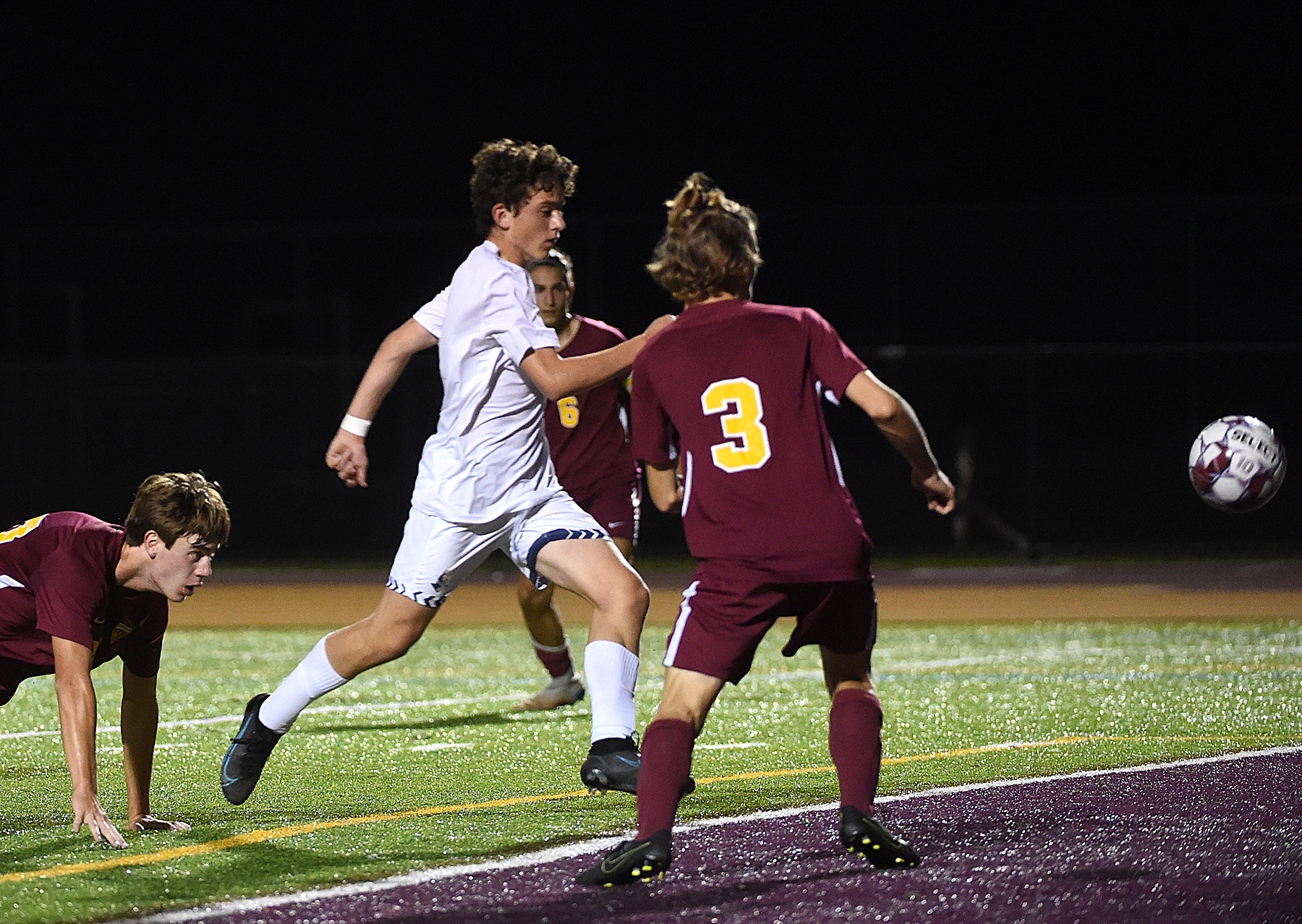 LONDON GROVE >> The start was a bit shocking. The response forceful.

And in the end, District 1 playoff contender West Chester Rustin survived a regular season ending boys’ soccer match in which the opponent, Avon Grove, was playing for nothing but pride.

The Golden Knights fell behind by two goals early, but stormed back to register a 4-2 road victory over the Red Devils Thursday, and will take some lessons learned into the district 4A Playoffs that start next week.

“Tonight was a trap game,” acknowledged Rustin head coach Ryan Castle. “We talk all the time about respecting every opponent but fearing no one.

“You have to be ready for every game. Avon Grove came out, took it to us and then we were eventually able to turn the tide. It was a nice opportunity to see some adversity, and we had that being down 2-0.”

Ninth in the latest district power rankings, the Knights improve to 9-3 in the Ches-Mont, 12-4 overall.

“Behind closed doors we set a couple team goals: we wanted to make districts, we wanted to host a playoff game, and see how far we can go,” Castle revealed.

“We don’t have experience in districts, so the question becomes: can we stay composed? I liked the adversity tonight because it gives us a little bit of a taste.”

The Devils’ season ends at 4-14 overall (3-9 in the league). But afterwards, head coach Mark Puican had no complaints about his team’s effort.

“This is tight bunch of guys, they’ve worked hard in training and they wanted to make each other better,” he said.

“The first half our guys came out and did the things I’ve been asking them to do – and it worked. We were communicating effectively and our first touch was better than I’ve seen it in a while.”

In all, Rustin had the edge in shots on goal (17-5) and corner kicks (5-1). Avon Grove experienced the same defensive trouble that a lot of opponents have this fall: containing the Knights’ speedy forwards.

“Mohamed (Hendawy) and Dimitri (Mikris) are going to give fits to any backline,” Castle acknowledged. “And (Danny) McGonagle is a sophomore and he runs the show. So with them, and Ryan Seelaus as an attacking midfielder, we are a formidable group.”

The Devils jumped all over the Knights early, scoring twice in the opening 13 minutes. The first was a blast from distance off the foot of senior Alex Castano that caught the upper left corner. About five minutes later, a Derek Lopez steal led to a 2-on-1 with Michael Villa and he deposited it into the net for a surprising 2-0 lead.

But Rustin soon recovered and proceeded to dominate the last half of the opening period. A senior, Hendawy scored with just over 15 minutes on the clock, and moments later delivered a perfect pass between defenders to teammate Jake Truitt for another.

“When (Avon Grove) scored the first goal, it was a wake-up call,” Hendawy said. “And after the second, we knew it was serious.

“We had to turn it up a notch and play our brand of soccer.”

And then in the final 84 seconds, the Knights took their first lead when McGonagle took a pass from Makris, got off a shot that was saved, but scored on his own rebound.

“(Rustin’s forwards) are very physical with great size,” Puican said. “They are looking to play direct and they have the speed to do it.”

Hendawy wrapped it up with his second goal with just under 14 minute remaining in the second half.