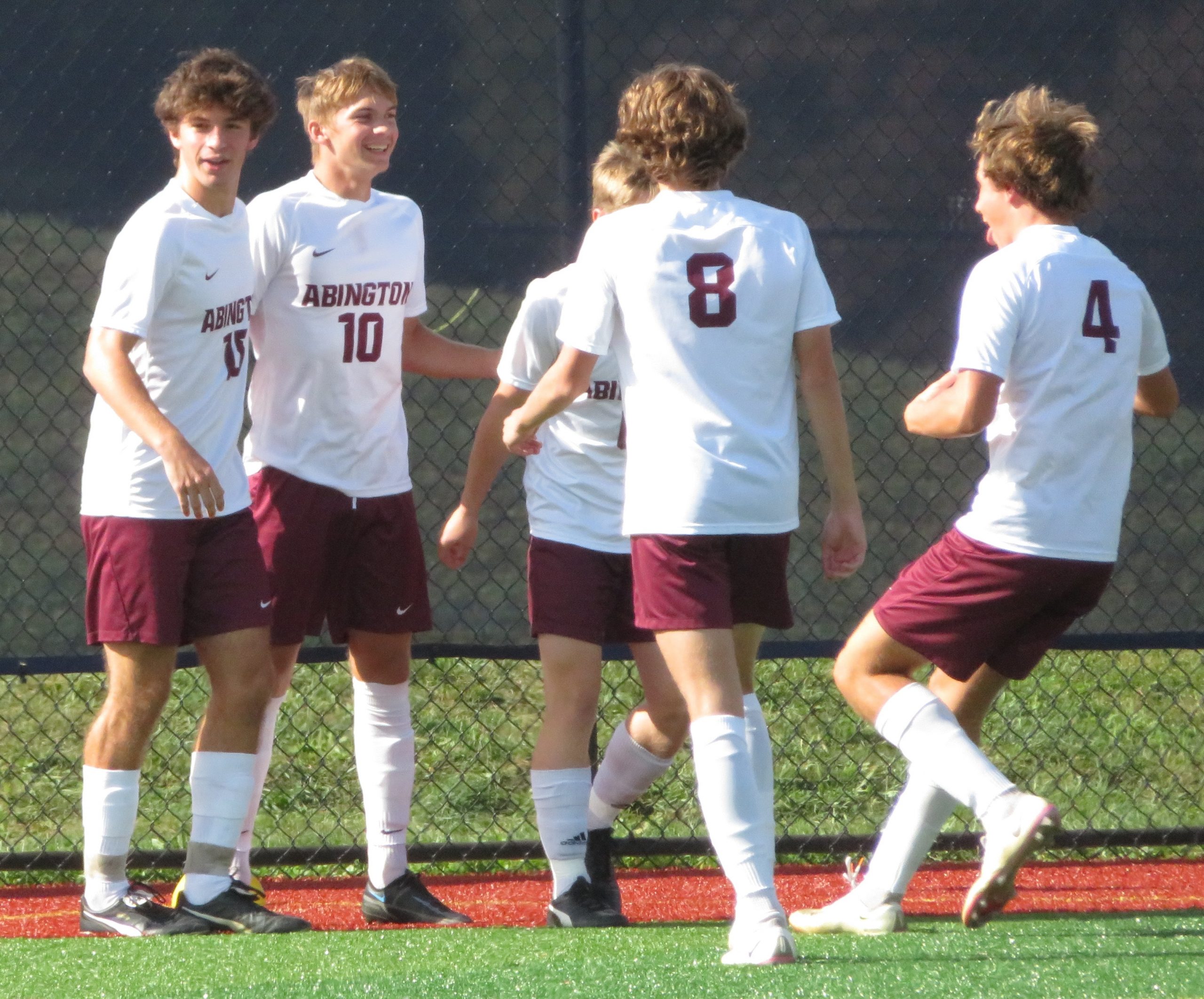 WHITEMARSH >> Monday afternoon’s Suburban One League Liberty Division game between Abington and Plymouth Whitemarsh ended the same way that it started – with a Liam Hartman goal.

The Ghosts junior midfielder scored 45 seconds into the game to give his team an early lead and buried a penalty kick in overtime to lift Abington to a 3-2 win at Plymouth Whitemarsh High School.

“Score,” Hartman said of his mindset on the final shot. “It’s that simple. Score the ball, game over.”

In a match that featured plenty of controversial calls, no one appeared to disagree with the whistle that led to the game-winning goal. Abington’s Pat Capone earned the call when he was taken down in the box.

Hartman went left with his shot and found the back of the net when the PW keeper dove right. Hartman ran to the corner with his teammates to celebrate.

“Liam’s a goal scorer,” Abington coach Randy Garber said. “Under pressure he’s been taking all our penalty kicks and I think this is the third one we’ve had in five games. He’s finished all of them. He’s scored more goals than anyone on our team. He’s like ice water when it comes to finishing.”

The game-ender came a couple of minutes after the Colonials had a pair of great scoring chances. The first appeared to be a penalty kick for PW, but it was ruled the Abington handball occurred outside the box. The free kick was blocked by Abington’s wall of defenders. The second was a shot by Joe Redmond that hit the crossbar and bounced away from the goal.

“We played fantastic,” PW coach Rich Kessler said. “Outside of the first 45 seconds where we gifted them a goal, I think we were the better team all the way through. I don’t say that a lot, but I think our guys deserve to have that said. It is what it is. We always know these are going to be battles. I’m happy with the way we played.”

The Ghosts (5-0, 4-0 SOL Liberty) took a quick lead thanks to a Jimmy Marino throw-in. The senior defender sent the ball from the sideline to the back-post, where Hartman was waiting to finish with his right foot.

“Drew (Paxson) on the right side and Jimmy on the left side is awesome,” Hartman said of his team’s throw-ins. “It’s almost like a corner kick every time.

“He threw it far enough to the back-post on this field. I was in the right spot at the right time and tapped it in. First goal.”

The Colonials (2-3, 2-2 SOL Liberty) tied the game in the 19th minute. Luke Edwin sent a long pass up the middle of the field to Brendan Corpus, who beat the Abington keeper in a race to the ball. Corpus dribbled left and put the ball into an empty net to tie the game, 1-1.

“We have really high character kids on this team,” Kessler said. “They’ve been through a lot so it’s a really resilient bunch. Good leadership, obviously, with Brendan Corpus and Dean Allen, captains. Those guys are rocks. (Responding to the early goal) says a lot about the group. We’ve struggled with those early goals… but we worked through it and battled back. I think we played, from that point on, as good as can be expected, so I’m happy with that.”

PW scored a similar goal in the 28th minute to take a lead. This time Edwin’s long pass went to Mason Clatterbuck, who got around the drawn-out keeper and tapped the ball in.

That lead lasted for less than four minutes. Abington’s Capone volleyed a shot from 35 yards away into the top left corner of the net to make it a 2-2 game.

Plymouth Whitemarsh controlled play in the second half. The Colonials out-shot Abington, 7-3, and earned two corners to the Ghosts’ zero in the final 40 minutes of regulation. Abington goalkeeper Kevin Krechman turned all seven shots aside and PW’s Corpus had a chance in the 89th minute that sailed just over the crossbar.

“We were sitting back waiting for the counter moreso than anything,” Garber said. “We were playing good defense and Kevin gave us an excellent second half. We were looking for a counter that we could capitalize on. It never developed and it came down to overtime and a mixed scramble in the box.”

These league rivals will meet again at Abington on Oct. 19.