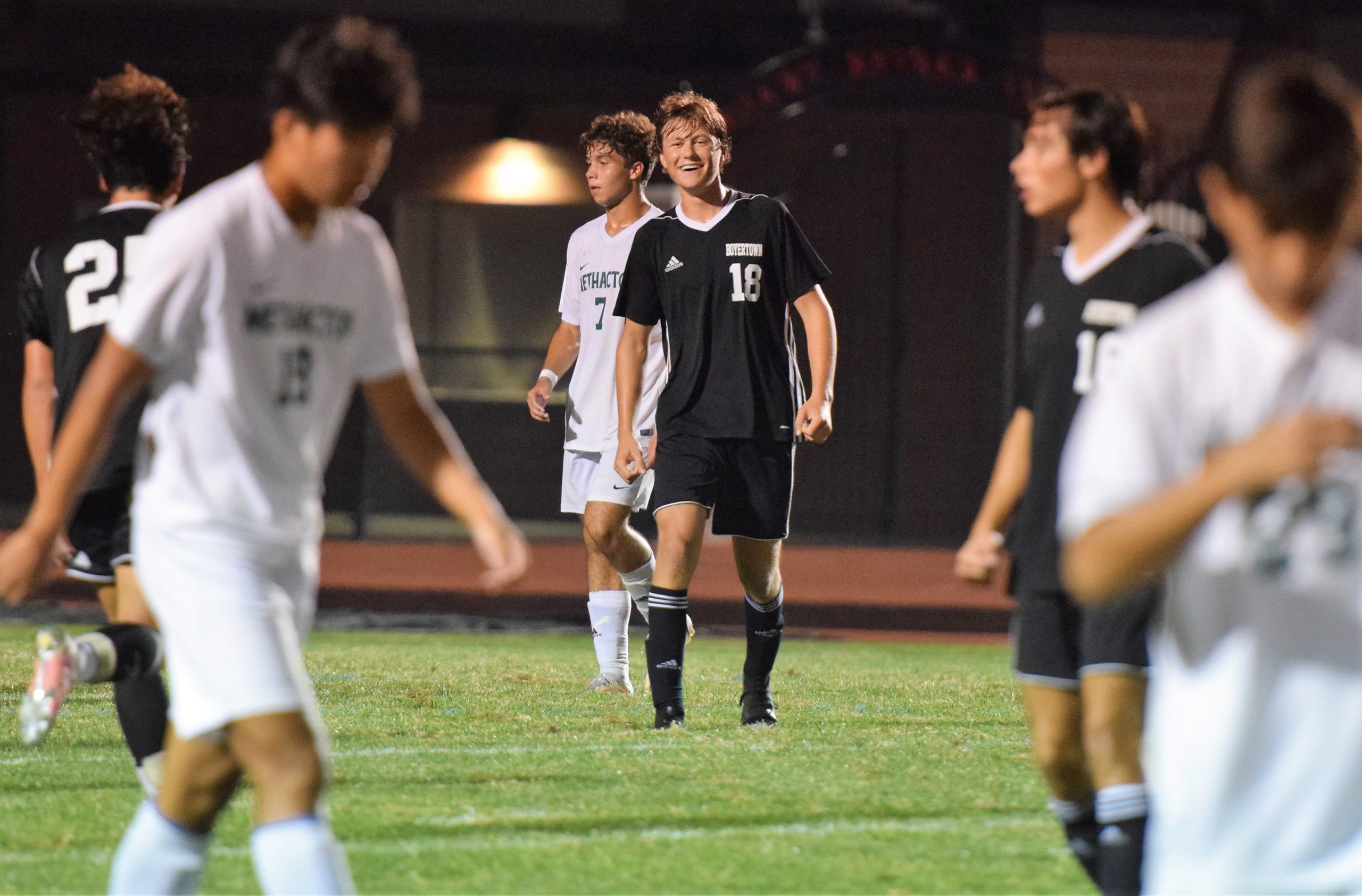 BOYERTOWN >> One was improbable. Two was incredible. But three …

“It’s absurd,” said Beckett Wenger, “but he did it. Coming out of nowhere for all three goals. A left back going into the box for three goals in an 80-minute game, it’s unheard of.”

Throw whatever hyperbole you like at Luke Moser’s Tuesday night, it’ll all fit.

The senior left back played the hero three times in a wild comeback win for Boyertown over upstart Methacton, the Bears scoring two goals in the final four minutes to emerge with a 3-2 win under the lights at Memorial Stadium. For some teams, a defender being in such advanced positions to score three close-range goals would be out of place. Not for Moser and the Bears it seems.

“We have that left wing pinching in and I’m trying to make that overlapping run, he’s pulling two defenders and giving me a lot of space,” Moser said. “I just happened to have a good night with a lot of good assists from other people.”

Moser opened the scoring by getting on the end of a soaring 30-yard far-post cross from Colin Eisenhard three minutes into the second half. But Methacton’s Zach Willen answered on a ball over the top down the left side 1:14 later to tie it 1-1. It was the Warriors’ first quality scoring chance of the game after the Bears bossed the first half but Methacton keeper Steven Remish stood tall, including on a pair of 1-on-1 opportunities with returning All-State player Wenger.

For the Warriors to have a lead in Boyertown after losing 4-0 and 5-1 in their two meetings a year ago, it was a clear sign of growth.

“That first goal really put belief in us,” said Methacton senior defender and captain Graham Halfpenny. “Last year, both times we played them it was a horrible game. Getting that goal really sparked belief and to get that second one, everyone really stepped up.”

The Bears were deflated after the Ahlum penalty kick, but not done.

“After the PK, it wasn’t looking good for us. We were in our end a lot,” Moser said. “But we happened to have some good combos late. We all came together.”

A Bears’ rally didn’t appear so likely until they were shocked back to life on a booming Zach Foskey free kick from the right side that bounced to the far end line. Wenger hit a shot that hit the left post and was partially saved by Methacton’s Remish, but Moser was primed for the tap-in and tying goal with 3:26 to play.

Methacton’s Zach Willen, center, celebrates after his goal in the second half against Boyertown on Sept. 14. (Austin Hertzog – MNG)

Only 1:15 later the Bears were celebrating the game-winner after Wenger beat Remish to a high-bouncing ball in the penalty area and flicked the header toward the far post and – who else? – Moser.

“Left backs usually don’t get the credit they deserve,” Wenger said. “Once they score one, maybe two or three in this case. It shows that (Moser) has that mentality that he wants to play well, score and prove his worth.” Despite the heartbreaker, Methacton, which got standout midfield play from Otto Hull, feels like a much-improved outfit from the one that finished last (3-8-1) in the seven-team COVID-19 pandemic-altered PAC of 2020.

“The guys have gelled. Last year we had some talented kids but we never really gelled as a team. This year everyone’s getting along, there’s no so-called toxic players, everyone’s friends and we all play well together,” said Halfpenny. “I want to be the type of captain that pushes everybody on, moves them on from their last mistake and get the best out of everyone so we can come and compete in games like this against the reigning PAC champions.”

After Boyertown had to rally from a slow start in 2020 to retain the PAC championship, Tuesday’s result will help avoid a similar fate.

“Last year we didn’t start off well. But we came together as a team and now the chemistry is there already and we’re playing well,” Moser said.

“We want to defend our PAC championship from last year. That was a factor (in the comeback),” said Wenger. “And we had a good student section and parents coming out and I think we wanted to prove it for everyone who came to the game. It showed a lot of character and we wanted to show our fans that we want to win for them.”