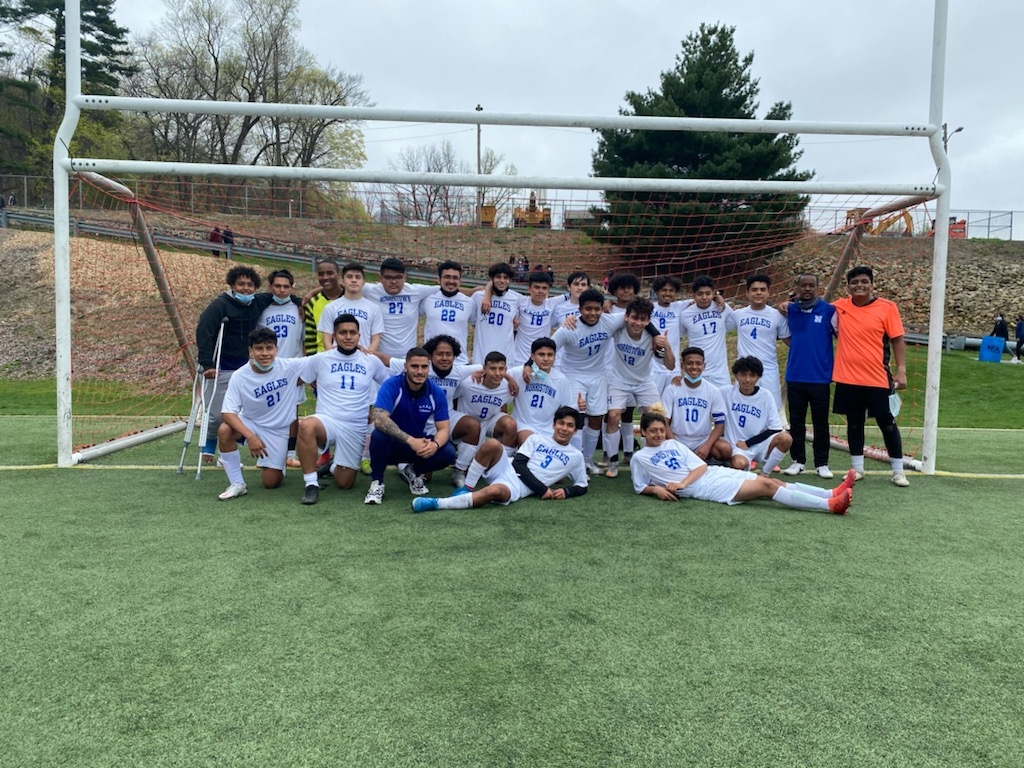 The Norristown boys soccer team bookended its season with 2-1 games against Reading. The first was a season-opening loss when the Eagles struggled offensively without some of their best players. The second was a United X championship win – the first league title in program history – Saturday at Reading High School.

“It was an experience,” head coach Jason Pinnock said. “Those kids – I always told them that they were a great team, it was just getting it together as a team. For them, they wanted it bad. That was the good thing about it – they knew they never won anything. Especially for my seniors, the ones that I had grew through the program with, it was so special to watch them grow through those four years and then see them their final year win something. It’s flipping the program on its head. We’re here now. It was a really nice experience.”

“It feels amazing to be a part of history,” senior Edwin Angel said. “Many didn’t expect this from us at all and it feels awesome knowing I helped guide this team to a championship.”

The championship victory capped off an unusual soccer season. The Eagles played in the spring after deciding not to play during the traditional fall season due to the COVID-19 pandemic. They only played seven games, four of which came in one week, before entering the league playoffs as the No. 3 seed. Wins against No. 2 Cheltenham in the semifinals and No. 1 Reading for the title gave Norristown a 6-3 overall record.

Junior Diego Guzman was the Eagles main offensive threat this season and he proved it on the biggest stage. He scored both goals in the championship win – the first about five minutes into the game and the second around the 20-minute mark.

“(Starting fast) was important because the first goal is usually a difference-maker,” Guzman, who missed the first matchup with Reading due to a deep bone bruise, said, “but (Reading was) doing pretty good. They were pressuring us. I think we did a good job at containing and we got the job done.”

The two early goals proved to be all Norristown needed. Reading cut its deficit in half and had plenty of chances near the end of the game, but senior goalkeeper Andy Dricio came up big to keep the Eagles ahead.

“They definitely had chances to tie it,” Pinnock said.

“They shot one off the left post, there were a couple scrambles in the box. They had some shots on net. It wasn’t an easy game towards the end, I’ll tell you that.”

Winning the championship with a 2-1 score was fitting for Norristown this season. They won with defense this year while Guzman and Alex Rosas did most of the scoring. Angel, Luis Morales, Jesus “Chucho” Dricio, Eddie Gonzalez, Renato Castillo and Jonathan Hernandez all played key roles in keeping opponents off the scoreboard.

Pinnock is in his first year as the Norristown boys soccer’s head coach. The Norristown native and Spring-Ford High School graduate joined the staff as the coach of the freshman team in 2018 before taking over varsity this year.

“It’s cool to see the growth (of the players) and how they develop their game and their mentality and stuff off the field they talk about,” he said. “It’s special to groom these kids and hope to see that they do the same in life as they progress after high school.”

How to report scores to the Daily Times
‘Stoga, half dozen Ches-Mont teams look to be the area’s best