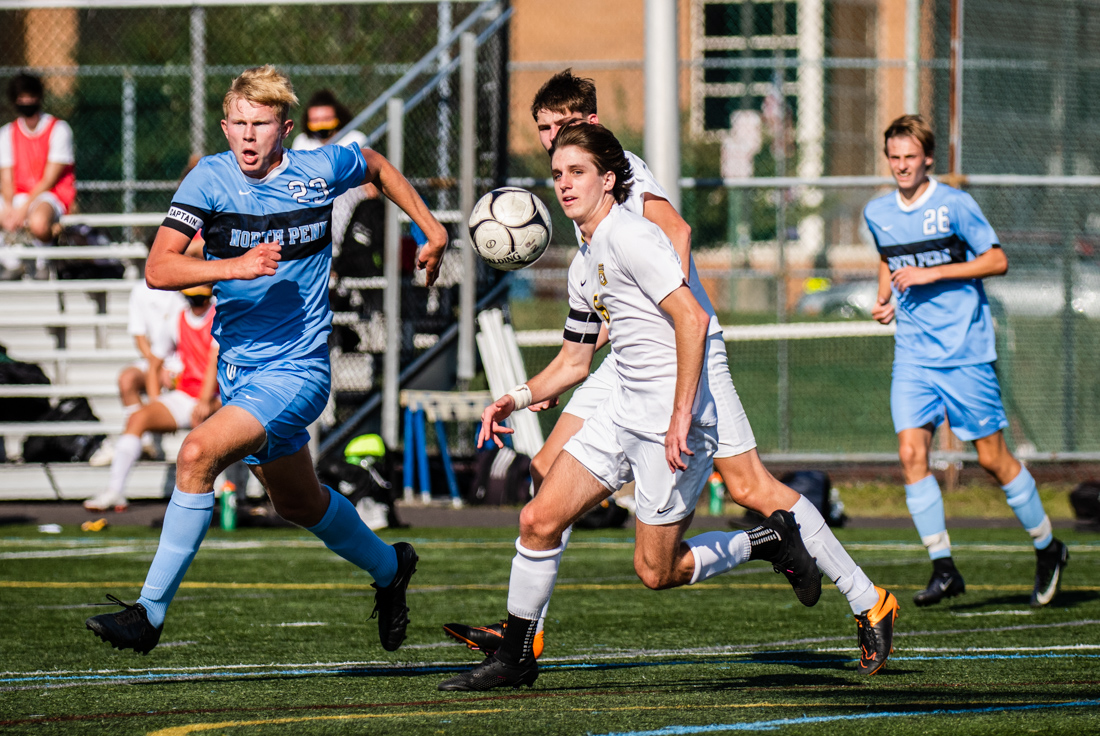 To benefit his team, Josh Jones had to be more selfish.

The North Penn senior has always embraced making the right play or winning play over a glory play but with the Knights retooling off last year’s state title, he needed to give them a little more. Knowing he’d have to shoulder more, Jones was up to the task and learned to look out for himself a little more.

Proving to again be a force for a conference champion and District 1 semifinalist, Jones has been tabbed The Reporter/Times Herald/Montgomery Media Boys Soccer Player of the Year.

“I thought our season was great,” Jones said. “It didn’t end the way we wanted and I wish I could have played that last game but our senior class in the last four years accomplished something not many other teams could say they did.”

Jones’ season ended on the sidelines, a nagging back injury finally becoming too much for him to push through as the Knights fell to Neshaminy in the District 1-4A semifinals. Without the future Lousiville Cardinal on the pitch, North Penn didn’t look like the same team, another credit to all the towering midfielder contributed.

At 6-foot-4, Jones is a constant presence that every opponent has to account for. This fall, with most of the goal-scoring threats from the 2019 District 1 and PIAA championship team graduated, even more attention came the big guy’s way.

Being a focal point defensively isn’t new for Jones, especially at the high school level, but it was still something he had to deal with.

“I’ve been doubled from other teams in our league and club, so it’s not that new to me but I had great teammates next to me,” Jones said. “If I wasn’t open because I was double or triple-teamed, we all knew someone else would be open.”

Again, Jones’ usual inclination is to win the ball and get it to a teammate first before he tries to take it himself. Last year, that led to a ton of production for an explosive offense but this fall, it wasn’t quite the same. While the Knights had finishers and creative players, they weren’t going to match the output of the 2019 title team.

Jones was still being asked to do his usual thing of dominating the air, possessing the ball and connecting passes but he’d also have to put more balls in the back of the net.

“I was asked to score more goals and set up more people than I had the past two years,” Jones said. “Having the guys like Carter (Houlihan) and everyone else last year, I could play in the midfield and focus on winning balls and connecting passes. This year, I was looked upon to come up in big moments and deliver some goals.”

It didn’t come right away, although Jones did assist the game-winning goal in the team’s opening match but he found the touch eventually. The senior collected 12 goals and six helpers during the fall, including a four-goal game against Pennridge midway through the season.

Used to playing deeper on the field, Jones added this season was the first where he had to play with his back to the goal. Learning how to receive and hold the ball as an advanced midfielder was another wrinkle to iron out.

“The floodgates started to open and I started putting myself in better opportunities to score,” Jones said. “My whole life, I’ve been a pass-first guy and not a dribbler or trying to take on three guys at once. My Dad told me before the season started that I had to be more selfish and when I was in front of goal, start to look to score.”

A co-captain as a junior and one of a small handful of experienced players returning from the title team, Jones also knew he would be called on as a leader for the Knights. With a couple players new to the program and many others stepping into bigger roles, Jones wanted them to believe they could make a run this fall as well.

Jones credited the senior class when he was a freshman for helping settle in and find his confidence and it’s something he wanted to pay back this season.

“I wanted them to know, no matter your age, you can play,” Jones said. “We had a lot of young guys in key positions for us but they stepped up. With those guys, you have to make sure even if they’re nervous at first, that they know they belong with us.”

Jones got some good news on the injury front after the season ended. Initially fearing he may have fractured a bone in his back, an MRI revealed nothing that serious and he’s on course to return for basketball season.

The senior thanked the Knights training staff for helping him battle through pain and discomfort during the season. With a future at the Division I level in the ACC ahead of him, it would have been understandable if Jones opted to sit out but that thought didn’t cross his mind until he had no other option.

“Every time I can play, I’m going to,” Jones said. “It was my senior year, if I could have been out there that night against Neshaminy, I would have done anything I could. If I’m good enough to play, I’m going to give everything I have.”

Jones, who plays club ball for the Ukrainian Nationals SC, has traveled the country and even globally to play soccer, being chosen to an Adidas Select team that trained at Real Madrid prior to his junior year. But there’s also been plenty the Knights program has given him.

The senior credited the culture that coaches Paul Duddy and Chris DePeppe have built at North Penn as a positive influence on him and the physicality of high school soccer is something that will serve him well going to college.

“I’ve had this conversation a lot with my Dad, a lot of these academy players are only looking out for themselves and trying to progress to that next level,” Jones said. “There’s not really a mindset of winning games but at North Penn, or any high school, you’re playing to win games, build that camaraderie with your teammates and develop a winning mentality.”