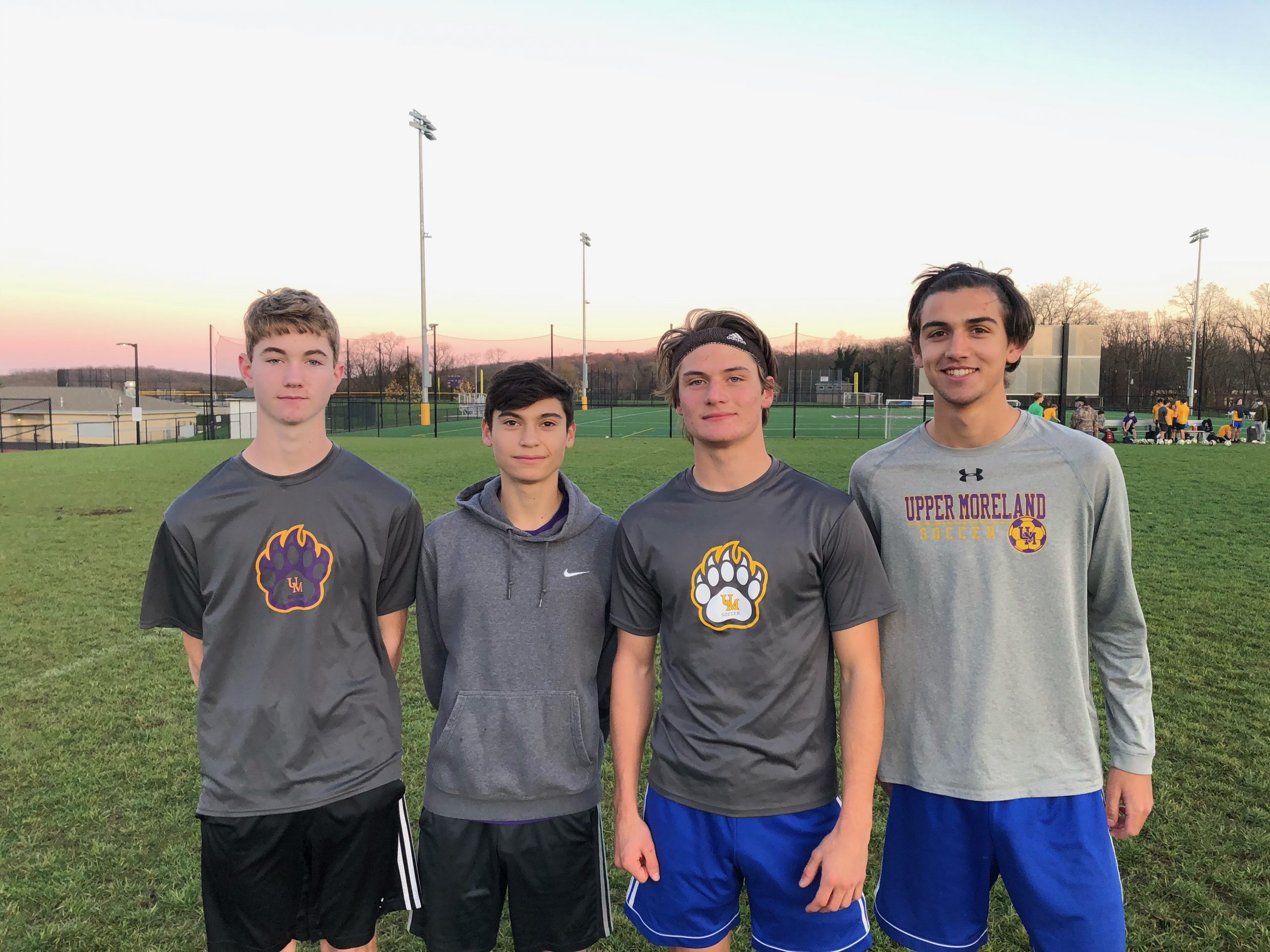 It hasn’t been flashy, but it’s certainly been successful.

The Upper Moreland boys soccer team finds itself a win away from playing for a state title as it heads out to Mechanicsburg to face Northern York in Tuesday’s PIAA-3A semifinals. Getting that far is the result of a close-knit group that’s stuck to the basics.

But don’t let simple approach be a deterrent, the Golden Bears have earned every step of the way.

“We’re pumped, we have a lot of adrenaline and feel ready for it,” UM co-captain Josh Henderson said. “It feels great, it’s been 10 years since the team was in this position and we’re looking to take it all the way to a state title.”

After not qualifying for the District 1 playoffs in 2019, the Bears not only drew the top seed in this fall’s four-team bracket but carried it through to win their first district title in a decade. They followed that up with a thrilling win over District 12 champion Archbishop Ryan in double overtime on Saturday and now sit a win away from Hershey.

The next hurdle is a challenging one however. The Polar Bears are 18-0-1 on the season, won their first ever District 3 title and come into the final four off a 4-3 victory against Selinsgrove. Kick-off Tuesday is set for 6 p.m. at Mechanicsburg’s North Side Elementary.

While Henderson, one of four co-captains, said the Golden Bears respect Northern’s record and expect a quality opponent, they’re going to stay focused on themselves.

“Everybody on this team, we’ve been playing together since we were really little,” co-captain Travis Slear said. “We’re playing for each other and it’s a family.”

Among the earliest things first-year Upper Moreland coach Justin Allegra wanted to establish was a sense of consistency. Last year, the Golden Bears changed up formations and player positions throughout the season, leading to up and down performances.

Allegra, who also coaches at the college level, wanted to keep it simple and set one formation for UM to use. The decision has paid off with a 4-4-2 that plays to the Bears’ strengths but also keeps the game straightforward.

“For these guys, the more simple, the better,” Allegra said. “You find one formation and stick with it and just hammer it home. Once you start changing formations, you’re asking them to think too much and when that happens, you start letting goals up.”

“It actually helps a lot, last year were playing 3-5-1, 4-4-2, maybe a 4-1-3-1 or something like that,” Henderson said. “It kind of put us out of whack, so it helps us to keep a simple formation and change appropriately how we play throughout the game.”

Letting goals up hasn’t been much of an issue for the Bears. UM has given up just 14 all season and has yet to concede more than two to any opponent in a single match. The defense is experienced, anchored by center backs Henderson and Michael Kane while Slear and senior Greg Wiley play fullback.

Allegra said the defensive group blends speed and skill well while Henderson added they communicate well. The defense’s effort was a major factor in Saturday’s win over Ryan as the Golden Bears were able to contain the Raiders’ two dangerous forwards and track down the long balls the Catholic League side wanted to play over them.

“Most of the guys that start are seniors and we’ve been playing on this team for three or four years together,” Slear said. “Justin has been telling us from the beginning of the season we’re lucky to even have a season at all. Schools around us like Cheltenham aren’t even playing so we didn’t take it for granted and handled every game as it came and took the wins we were able to get.”

UM posted a 7-2 regular season record and finished second in the new SOL Freedom conference. The Bears’ two losses, both 2-1 decisions, came to conference champion William Tennent, which went on to earn the No. 2 seed in the 4A bracket.

If there were any questions about the Golden Bears’ quality, they more than answered them in their playoff wins over Bishop Shanahan, Pottsgrove and Ryan. Co-captain Mateo Infante, who scored the district title-winning goal in double overtime against Pottsgrove, said the team was out to prove itself this fall.

“In the past, everyone would think of Upper Moreland think it was an easy win,” Infante said. “This year we’ve proven that wrong. With each win, our confidence grows and we just keep rolling.”

Playing into extra time the last two games hasn’t seemed to faze Upper Moreland either. With seven seniors on the roster, the team has shown plenty of composure in the win-or-go home phase of the season.

Junior co-captain Logan Taylor, Infante’s partner in center midfield, again pointed to the team trusting its formation and the 11 players on the field playing as a sum of their parts.

“The teamwork and hard work we’ve had all season shows in the games,” Taylor said. “In tight games, we don’t stop fighting until the final whistle blows and we won’t stop running or working until we get the ending goal.”

Allegra also lauded his players for following all the required health and safety guidelines to keep their season going. Tuesday brings a trip and a test, but the Golden Bears are eager to face it.

“These guys just bought into the system and we’re really like a family here,” Allegra said. “Everyone kind of looks out for each other and we’re just trudging along as a group, putting the ball in the back of the net and winning games.”