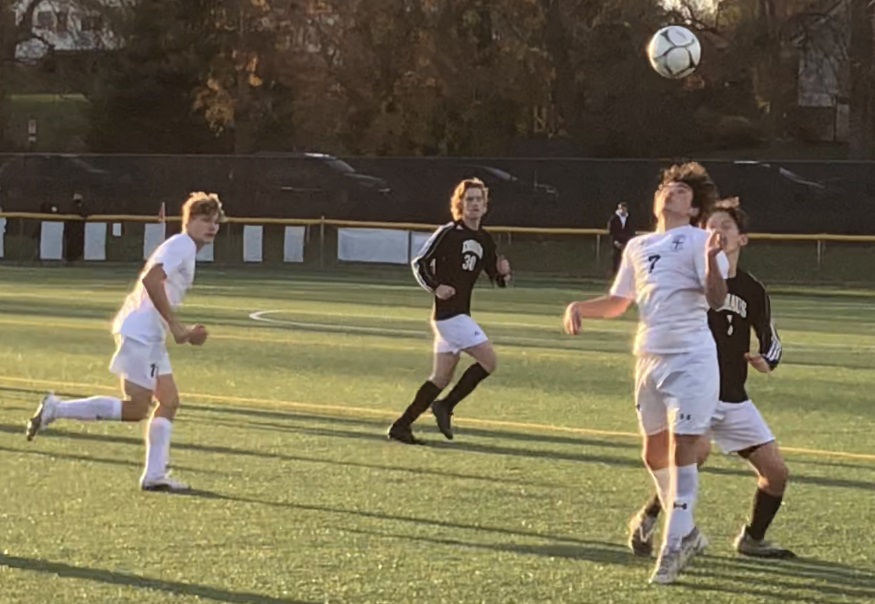 La Salle's Thomas Lenge (7) fights for a header against an Emmaus defender during their PIAA-4A quarterfinal on Saturday, Nov. 14, 2020. (Andrew Robinson/MediaNews Group)

EMMAUS >> Gathering his players around, La Salle boys soccer coach Tom McCaffery gave a talk he’d hoped he wouldn’t have to this fall.

Just a few moments removed from the end of their season, the Explorers looked at their coach with sullen faces and some red eyes as McCaffery told them if they wanted to hurt, it shouldn’t be because they lost but because their time together was over. The Explorers had high hopes for this fall and accounted for themselves well, but they had lost to a team just as good as they were.

A late goal and some dogged defending helped host Emmaus battle past La Salle 3-2 in their PIAA 4A quarterfinal Saturday at Emmaus High School.

“The young men we have here really like the community aspect we bring and after a spring last year where they couldn’t be with their teammates and their brothers, it’s their outlet,” McCaffery said. “Going to the field, it’s a chance to knock it around, have some laughs and good runs. Fortunately, we had a lot of good runs this year but there’s only team that’s happy at the end of it.”

The contest, which pitted the District 12 champion Explorers against the District 11 champion Hornets, was an absolute classic. Both teams boasted stellar defenses with Emmaus (14-1) allowing just five goals all fall and La Salle (15-2) yielding just six on the season entering play.

Despite the five combined between them, it was still a defensive slugfest with both teams playing a physical and intense game but not one that ever strayed to reckless or beyond the scope of the objective. Emmaus center back Jaeden Amato, a co-captain, said his team knew the challenge that La Salle’s array of attackers presented and the Hornets needed to be united against it.

“The most important things was having our defensive mids sit back with us and really track those runs,” Amato said. “When we were up, they put numbers on us. We had three, four guys going against our back line and those two defensive mids really helped us out.”

La Salle struck first when Seth Michalak, who the Hornets didn’t have many good answers for, crossed in a ball that led to half-clearance right to Sean Jennings. The Explorers junior, who grinded all match against those holding midfielders, ripped the rebound chance home with 25 minutes left in the first half.

Explorers senior Brandon Curran had a header saved by Emmaus keeper Ty Bleiler, who played a pivotal role in the defensive effort, shortly after but the visitors seemed on the cusp of more. Curran, a senior co-captain, said his team had nothing to be ashamed of with the effort it put forth.

“We’re still proud, we know if we put one or two of those away, it’s a different game,” Curran said. “We made the chances, we still played really well. Our heads are a little down because it’s the end but we had a great season, we played well and had a great team.”

Emmaus was able to tie the game with 14:30 left when a cross found Alexzander Toto, who exchanged headers with a defender before laying a ball off that Nathan Romig punched home for the equalizer. While the goal seemingly came against the run of play, McCaffery noted the Hornets had nearly scored early in the game and the score was no fluke.

The final stanza of the first half and opening act of the second followed the same script, as La Salle’s playmakers broke through the first line of defense, put a ball in and the Hornets somehow managed to get out of it then returned some pressure of their own. Like the first half, the first score of the second came about 15 minutes in.

Toto took a chance, lashing a ball from about 40 yards out with the keeper off his line and the ambition paid off with a curling ball that looped over everyone and in with 26 minutes left. The Hornets would then face the full brunt of La Salle’s attacking ability as the Explorers sought to tie the game.

“We’ve been together all season, we just talk, talk, talk and look what it’s done for us,” Amato said. “It brought us this far and hopefully we go farther.”

Michalak and Thomas Lenge both forced Bleiler into saves in the next 10 minutes and the physical junior, listed at 5-foot-10 and 185 pounds, denied some other chances with his aggression in the box. Amato said Bleiler is a confidence booster for the backs because if they make a mistake, he’s not afraid to make a play.

BOYS SOCCER 25:10 1st half: La Salle 1, Emmaus 0
Another cross in by Michalak, half cleared but Sean Jennings there to blast it home pic.twitter.com/hQdjdm5E7P

La Salle’s pressure finally paid off thanks to a restart deep in Emmaus’ end. A long throw from Michalak founds its way into the box where Curran muscled off a defender to punch in the equalizer with 13:34 to go. Again, it seemed like momentum was on La Salle’s side but that next goal wouldn’t come.

“Even before I scored, we had a wave going, just shot after shot in the box and we couldn’t tap one in,” Curran said. “That’s what they ended up doing, they put it in and did what you have to do this time of year in the state playoffs. Credit them, they got the result.”

The eventual winning goal came off a corner kick when senior Hudson Peck’s service found senior Patrick Walsh in a cluster of players for a glancing header that gave the Hornets a 3-2 lead with 9:21 to go.

“In a tight game like this, a tight game on a razor’s edge, you have to make sure you take your chances and unfortunately, a few of ours went begging at the end and a few of theirs went through,” McCaffery said. “They’re commitment level to defending is tremendous, it’s almost that hockey defender mentality to lay out and block every shot they can. They’re always a leg in the way and the other part is positioning.”

La Salle’s senior class departs with three district championships, a state semifinal appearance in 2019 and this year’s state quarterfinal placement. Yet at the end, they were the guys telling the returning players to keep up the standard and they wanted next year’s team to reach the goal of a state title.

In a fall where many teams struggled to even get on the field, the Explorers played 17 games. Curran noted that was no small feat and it was something the players relished with all their opportunities to play together.

“We thought we were only playing three teams in a round-robin, so we’re happy we got something,” Curran said. “It’s fantastic, everything the PIAA has done getting together a state tournament in this time so we were ecstatic for the opportunity.”

BOYS SOCCER 17:32 1st half: Emmaus 1, La Salle 1
Nathan Romig ties it on a goal against the run of play pic.twitter.com/Ke6VYAaBIN

Curran said his message to the guys like Jennings, Michalak, Joseph Cole, James Barton and others was simply “keep it up.” Even with 16 seniors like Curran, Lenge, Derek Campo, Lucho Narcisi, Ben Herron and the rest leaving, the program will continue on and build on their contributions.

“Two years in a row now of these guys being here, it’s a matter of in the future us finding a way to score that goal when we need it,” McCaffery said. “It’s a tremendous group of young men, that’s the big thing I take away from each group, the commitment level to be the best representative of the school they can be.

“I can’t ask for a better group to work with and I would tell all of them they’ve done right by La Salle soccer.”

Neshaminy tops Pennridge in PK’s, captures District 1-4A Title
With end of career in sight, Haverford’s Udo-Inyang turns it on to keep Fords alive