Rowan’s brace, Neshaminy’s pressure too much for North Penn in District 1-4A semifinals 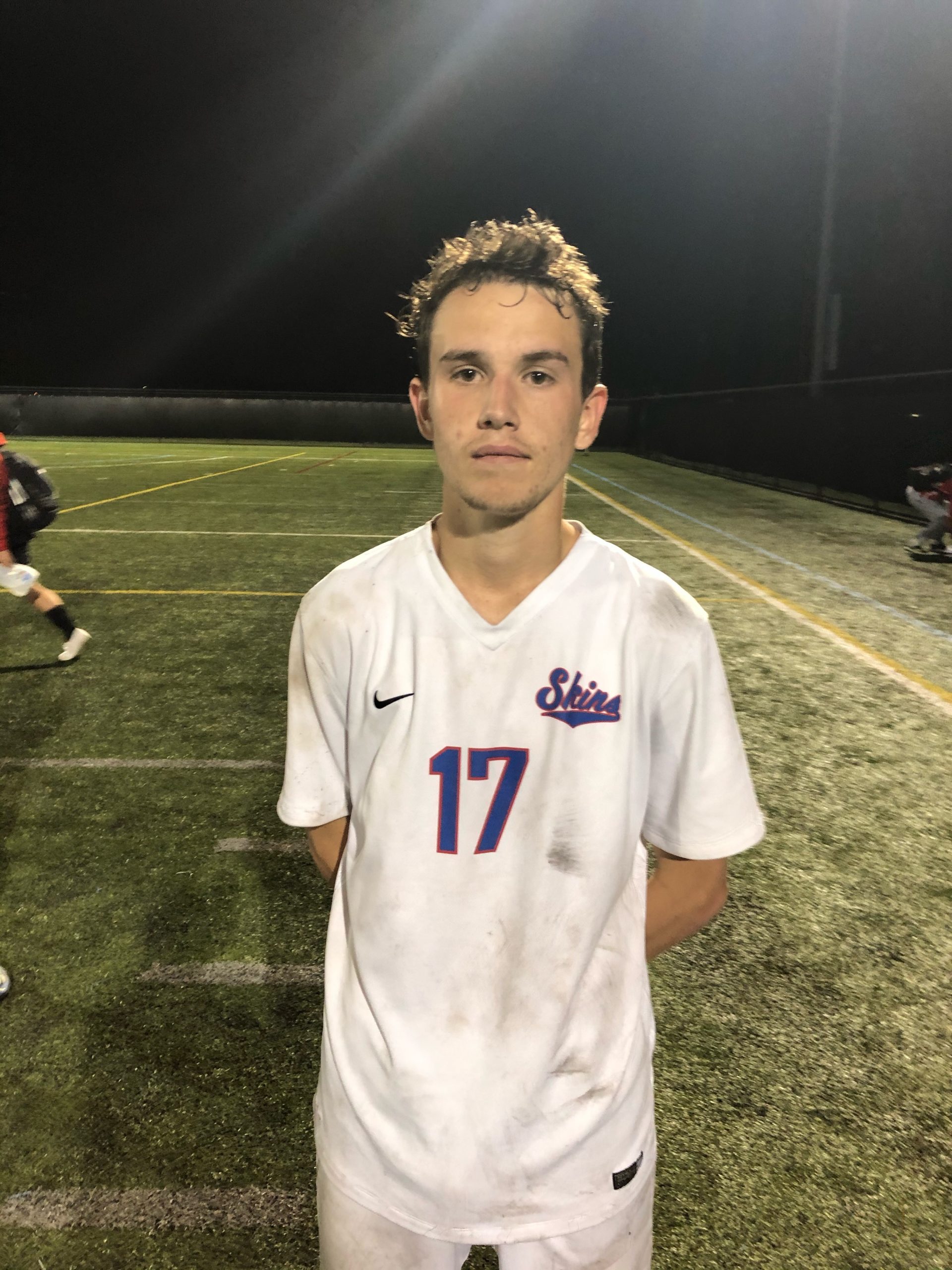 TOWAMENCIN >> It’s a mentality at Neshaminy.

As soon as the game starts, Neshaminy’s boys soccer team wants opponents to know what they’re in for over the next 80 minutes and don’t like to be told otherwise. What it means is a relentless amount of pressure, a direct style of play, resolute defending and effort.

No. 7 Neshaminy set the terms and did its thing as a brace from Gavin Rowan was enough to top No. 6 North Penn 2-0 in their District 1-4A semifinal on Tuesday night.

“I think we were a bit too excited and getting riled up by the ref’s calls so the second half we relaxed a lot more and played our game,” Rowan said. “We were able to open them up, eventually got our goal and built from there. It was mostly the halftime talk, we knew it would be a crazy game and we could have gotten knocked right out but by halftime, we realized we were in this.”

The result means there will be a new district champion and new PIAA champion this fall as the Knights’ road to a repeat came to a close. Neshaminy, which will host No. 12 Pennridge in Thursday’s final, will try to add a district title to its SOL Patriot crown this fall thanks to a well-tested group of seniors.

Knights senior forward Dominik Gedek said Neshaminy was the deserved winner on the night and credited the visitors for taking North Penn out of its element but it was impossible to notice the void in the Knights’ midfield. Senior Josh Jones, North Penn’s 6-foot-4 weapon and future Louisville Cardinal, sat out with a lower back injury he said could be a fractured bone.

Jones said it’s something he’s been dealing with the midpoint of the regular season but over the weekend, the pain became too much to play through. The senior still needs an MRI but was hopeful he wouldn’t be out of action than a month or two and could return for basketball season.

“Within the first five minutes, they had us playing their game and we can go long when Josh is in there but without him, it’s really not our game,” North Penn coach Chris DePeppe said. “You lose the figurehead of your attack two days ago to injury, it’s tough to reconfigure and we ran into a buzzsaw.”

On the field, Neshaminy took notice of Jones’ absence but Rowan said the only impact he wanted it to have on his team was not having any impact at all. If anything, the midfielder felt his team was a little too eager to try and start the script Tuesday it was backfiring in the first half.

With North Penn getting dragged into Neshaminy’s direct game, all the No. 7 seed had to do was maintain its aggression while also easing back on its rush to get things done.

Gedek felt his team didn’t have the same urgency that Neshaminy did, especially in the first half and it kept the Knights from connecting the strings of passes they needed to combat Neshaminy’s pressure. The forward, who made a determined run through a handful of Neshaminy tackles only to have it broken up in front of goal, credited the visitors for bringing the game to his side.

“We barely had any chances and we should have finished the ones we did, but you have to give up to them, they were the better team today,” Gedek said. “We had some free kicks and corners we could have used Josh on, but we also could have played better and had a better mindset.”

Neshaminy’s opening goal was all effort. Mike Albarrin started the sequence by fighting off a defender to put a ball in the air that Connor Steele was able to head toward the far post. There, Rowan timed his run and jump enough to pull Knights keeper Sawyer Meade off his line before heading the ball off the near post and in with 31 minutes to play.

For North Penn, which seemed to be finding some traction with its passing early in the half, it was a crushing turn.

“That goal came and it changed everything,” DePeppe said. “They all have that very ferocious mentality that’s hard to play against. Our guys have (that mentality) too, but they came at us today, they really did.”

Rowan iced the game with 9:48 to go when Neshaminy turned a North Penn corner kick into a game breaking counter. A long clear came to Jose Rivera, who in turn found Cole Jackson and Jackson provided the incisive pass that put Rowan in on goal.

The senior spun, then shrugged off a defender to again draw Meade out. Keeping his calm and his touch, Rowan slipped by the keeper, loaded up and used his left foot to bury his second goal of the night.

“Most of our goals, they’re not one-two, pretty passes, it’s a lot of hard work,” Rowan said. “I had to turn the kid a little bit, but my teammates put a good ball in and took the center back out to allow me to go 1-v-1. It freed me up to do what I’m best at.”

Albarrin finished the game playing center back, helping sure up a Neshaminy defense that’s been rock-solid all year and hasn’t given up a whole lot of chances. The senior chalked it up to communication and again that mentality, with any guy in the back knowing what their job is and working to get it done.

“Every single game, we press, press, press the whole time and won’t allow them to get past us,” Albarrin said. “We believe we’re going to out-work them, out-skill them, whatever it may be, we think we’re better. You have to fight for everything, it could be a ball going out in the corner and we’re still going to get after it every time.”

While the season ended on Tuesday for the Knights, they did capture an SOL Colonial title and finished as one of the final four teams in the district. DePeppe chalked it up as a successful season and said with a lot of young players from this year’s roster and a large crop of underclassmen in the program, the Knights will keep setting a high bar.

For Gedek and his fellow seniors, their departing message on Tuesday was to not expect long playoff runs but to go out and earn them.

“We have to learn the lesson that even though we were here last year, it doesn’t mean anything that we were state champs last year,” Gedek said. “You have to keep going and play like a new team every year and that’s what I want the guys to take away from this.”

Neshaminy will now host the District I 4A final when it meets No. 12 Pennridge on Thursday. The teams last clashed two years ago with the Rams winning a first-round district game and the Neshaminy seniors have not forgotten about it.

“It means everything,” Albarrin said. “It’s all the mentality, every game our coach makes sure we go in thinking we’re the better team. We’re going to go into it ready to press and do everything we do that makes us successful.”