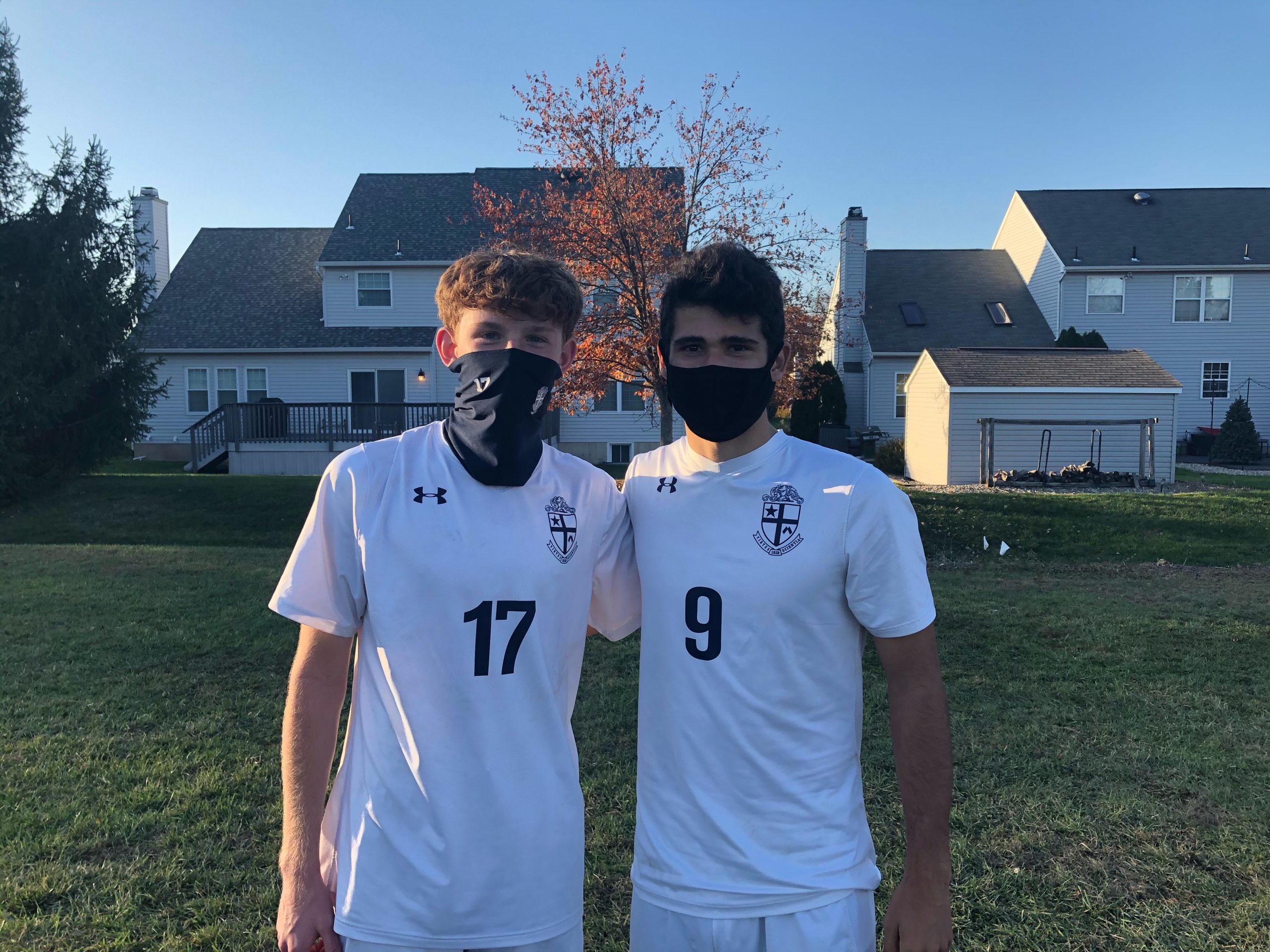 LANSDALE >> For La Salle soccer, the only 80 minutes that matter are the next 80 minutes.

About 24 hours after securing their spot in the PIAA 4A boys soccer tournament, the Explorers knew their efforts on Saturday would mean a little less if they didn’t finish the week strong. Facing a Lansdale Catholic squad that always plays them tough, La Salle was only focused on a strong 80 minutes Sunday afternoon.

A pair of first-half goals and a needed boost from the bench provided just that as La Salle topped the Crusaders 2-0.

“We had a really highly emotional game yesterday but with being a game to help us get ready for states, we had to keep that same level of emotional intensity,” La Salle senior Lucho Narcisi said.

LC was also trying to finish the weekend on a high note after two tough results earlier in the week. Thursday, a 1-0 loss to Devon Prep ended LC’s hopes of making the state tournament, but their season is far from over with five matches against PCL foes still on the schedule.

Despite being unable to try and improve on last season’s PIAA 2A quarterfinal run, LC coach Casey Farrell said his five seniors are determined to finish strong. Kellan Ward, CJ McNally, Declan Mahoney, Matt McDougal and Owen Webster have played key roles in establishing an identity for the Crusaders and they want to make sure the rest of the Catholic League knows the program isn’t going anywhere when they leave.

“These kids are warriors, they battle through everything and were very ready to go today,” Farrell said. “They battled hard, they always do and especially against circumstances not in their favor. We’ve worked really hard these past few years to put Lansdale Catholic on the map and let people know we’re not some small school you can bully around and we’ve done a really good job of it.”

La Salle felt a quick start would be paramount on Sunday not only to try and preserve some legs but also to keep the Crusaders from gaining confidence the longer the match stayed scoreless. The Explorers got just what they wanted six minutes in.

James Lenge found Brandon Curran for a shot that forced Ward into a kick-save, but the rebound fell right to Narcisi for a left-footed finish. Even with a couple regulars sitting out, La Salle didn’t drop off in terms of creation, putting 11 shots on target and keeping steady pressure on the Crusaders.

“We had to bring the same energy we bring every game, each 80 minutes counts,” midfielder James Barton said. “We looked to play fast, move the ball and finish our chances.”

Saturday, after a scoreless first half against Roman Catholic, Narcisi said the coaches made a few adjustments and it resulted in three goals for the Explorers as they won 3-0 to lock down the District 12 spot in states. Coming into Sunday against an organized LC team with an experienced defense that included Webster and McNally with Ward in goal, the Explorers looked to do more of the same.

La Salle coach Tom McCaffery chalked it up to his guys taking into consideration their level of finishing. Roman keeper Jason Wagner was on his game as well Saturday, but the Explorers were able to be more productive with their second half opportunities and carried it to Sunday’s first half.

“Today was the same message, when you play a good goalkeeper, you have to take your chances seriously,” McCaffery said. “We did that in the first half, it’s the one thing that definitely carried over. Our guys have been bought in to the way we want to play throughout and the one thing they do well, our guys are fit, physical and grind teams down.”

It also helps to have players adept at setting teammates up to finish. In the 17th minute Sunday, it was left back Joe Cole providing that kind of help when he gained the endline and served a cross to the far post that Barton nodded down and in with a deflection off a defender.

While it was a busy week for La Salle, which also played St. Joe’s Prep in a PCL 4A game on Tuesday, Narcisi said his team was ready for it through a season’s worth of preparation.

“We only lost six seniors from last season, so our chemistry was already at a high level and we maintained it during the season,” Narcisi said. “We know each other, we know how we play so it’s easy for us no matter who’s out there.”

If there’s one thing the Catholic League has a surplus of, it’s quality goalkeepers. Ward was terrific Sunday, making eight saves and as usual soaring above crowds to rip crosses and balls hit into the box out of the air. La Salle’s Derek Campo wasn’t as busy, but he made a massive save of his own, pushing a point-blank take by McDougal over the crossbar with about 10 minutes to go.

La Salle has one more postseason tune-up when it hosts Malvern Prep on Tuesday. The Explorers will face the District 11 champion, either Emmaus or Nazareth, in the state quarterfinals on Saturday with the winner advancing to face the District 1 champion in the semifinals.

“Our final goal is a state championship and we knew what we had to do coming into the year,” Barton said. “We’re working toward it with every 80 minutes. We just have to keep bringing the same intensity, our bench has given us great support and if we come out like this the rest of the season, we’ll be just fine.”

LC will get back to work on Wednesday against Cardinal O’Hara and Farrell is confident his seniors will have the Crusaders ready to break their slump. The program has 17 freshmen this year, including three on varsity, and plenty of juniors coming back so LC wants to make sure it won’t be overlooked next fall.

“It’s fun to watch them, they love playing the game, they love playing for each other and they love playing for their school,” Farrell said. “We have been playing as such a complete unit, a lot of these guys started on varsity as freshmen or sophomores and are now juniors and seniors, more and more we just get better at playing team soccer. The future is bright and we’re starting early with guys finding the Crusaders standard.”