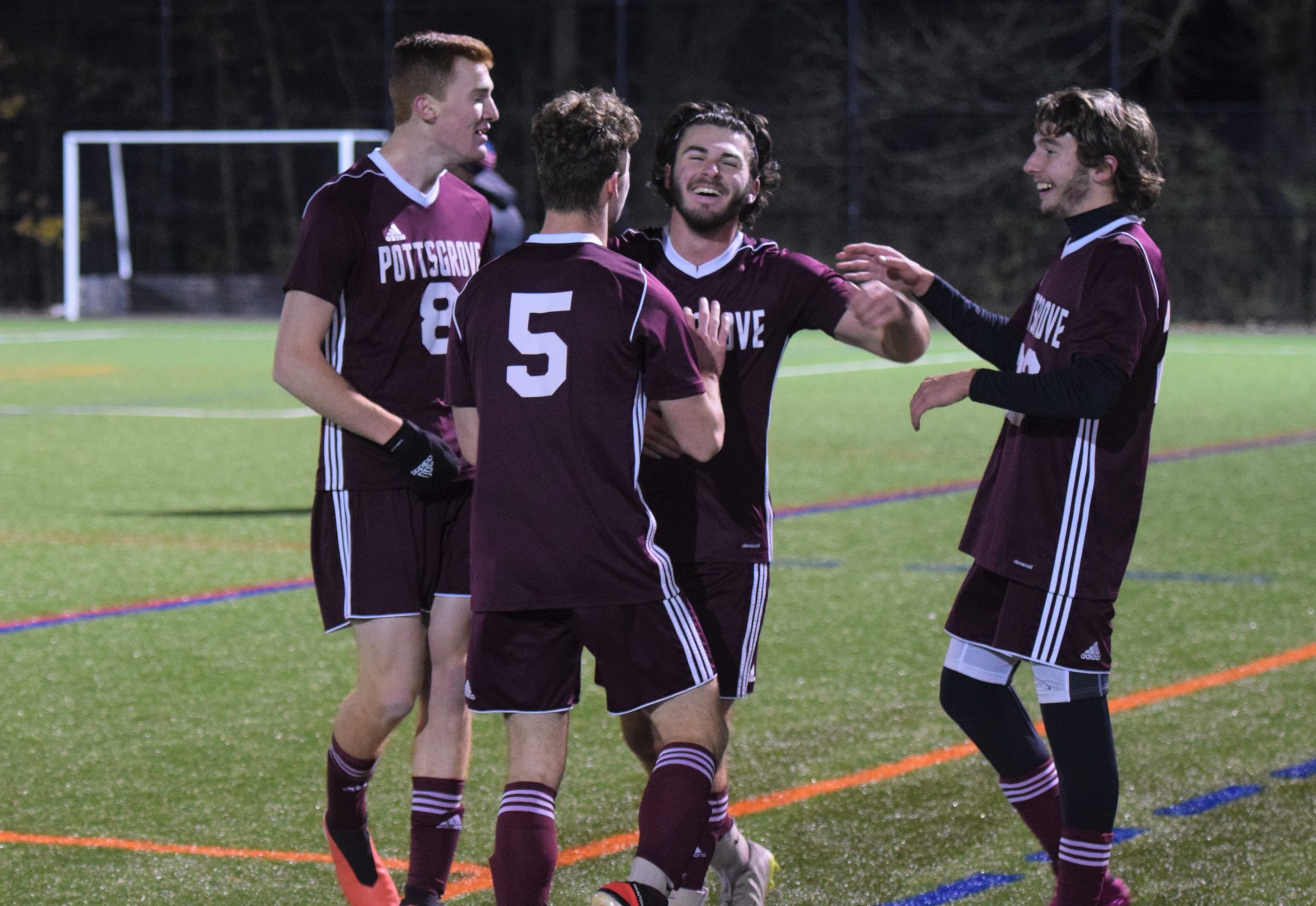 The Pottsgrove boys soccer team returned nearly its entire lineup from last season, which gave it the benefit or burden, depending on how you look at it, of clearly remembering how last season ended.

They weren’t the first Pottsgrove team to see its season ended by Holy Ghost Prep, a program that has been a chief rival to the Falcons’ district pursuits over the years, when it fell in overtime, 1-0, last Oct. 26.

“All of us were in that game, and to let it slip away like that was heartbreaking for us,” said senior midfielder Shane Gleason. “Having the opportunity to come back against them, we were not going to let this one slip.”

This one didn’t slip.

The No. 2 seed Falcons put on a commanding defensive performance like they’ve done consistently this fall and Gleason struck a shot from straight on at the edge of the 18-yard box in the 9th minute of overtime to Pottsgrove a 1-0 win over No. 3 Holy Ghost Prep in the semifinals of the District 1 Class 3A playoffs. Pottsgrove (8-4-1) advances to its first district 3A title game since 2015 when it advanced to the PIAA tournament.

“I’m just happy we get the chance to play in the championship game we haven’t played in a game as big as that,” said Pottsgrove senior Jeremy Thompson. “That was our goal at the beginning of the season. To get there and to play for a district championship, that’s what we’ve worked for.”

Senior Troy Watts assisted on Gleason’s game-winner, passing from the left side to the midfielder making a run. Gleason took a touch to the right to find a shooting lane between the center backs and struck it well enough that Ghost goalkeeper Conor McGrogan got a piece but was unable to keep it from finding the goal.

“Troy saw me making that run from holding mid unmarked and I saw that gap,’ Gleason said. “I knew I wanted the shot as soon as I got it in that area. That’s my kind of shooting distance.” This was the fourth time in the past six years the Firebirds and Falcons met in a winner-take-all district playoff game. In 2015, Pottsgrove won 2-0 and reached states. In 2016, HGP won 2-1 in overtime in a knock-out, drag-out match on their home field. Last season, Holy Ghost got the best of Pottsgrove, 1-0 in overtime despite going down to 10 men through a red card. Stefan Melokos was on the game-winner.

Monday’s match was a story of quantity versus quality. Holy Ghost Prep controlled possession and spent much more time in the Pottsgrove half, but could generate few great scoring chances against the Falcons’ center backs Cooper Fiore and Justin Collings, outside backs Kevin Michuku and James Thompson while goalkeeper Luke Kaiser was outstanding as usual with nine saves.

“I feel like they were on our side a lot especially towards the end there but our defense put our defense and goalie who is the best in the league just played a heck of a game. They really came to play tonight,” Thompson said.

Pottsgrove on the other hand relied on its defensive shape and making the most of counterattacking opportunities, but generated three of the four best chances of the final 49 minutes after a 0-0 first half.

“It’s such a great performance it was exactly what we were looking for coming into this game. You could see how badly we wanted it,” said Gleason. “All it takes is for one guy or one play to turn off and that could have been their game. We played a great defensive game. All we need is one chance.”

Pottsgrove had a great chance with 29 left in regulation when right back Michuki broke down the right side and cross to a dangerous area for the head of Gleason but it soared high. Its other best chance came early in overtime when center back Collings carried the ball into the HGP half and played Watts behind the defense. Watts’ low cross for Thompson was on target but the effort sailed high.

The Firebirds (6-9), who were led by captains Liam Fleming, Cole Stevens, Tony Colon, McGrogan and Ryan O’Har, had their best chance when Kaiser was forced into an upper 90 save during a frantic final minute of regulation.

Pottsgrove meets No. 1 Upper Moreland – a 1-0 winner over No. 4 Bishop Shanahan on Monday – in the final Thursday at UM (time to be determined). The winner earns a spot in the champions-only state tournament on Nov. 14.