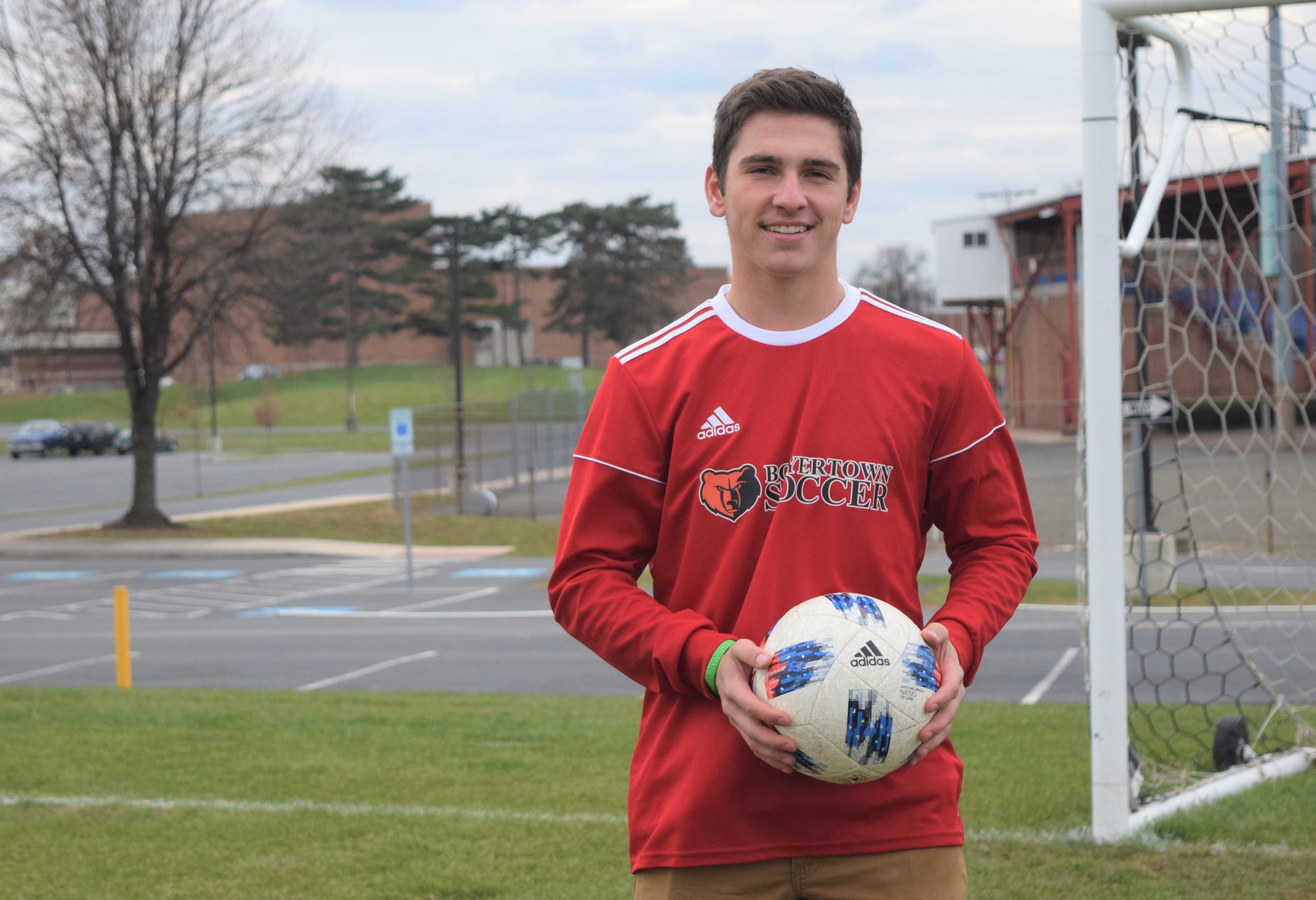 Watch a Boyertown boys’ soccer game this fall and one thing would have jumped out: it was loud. It was constant. And mostly, it was Ryan Foskey.

The Bears’ senior center back was a commanding presence this season in both play and voice as the talismanic captain of what became the most accomplished team in Pioneer Athletic Conference history. Area boys’ soccer has seen dominant regular seasons and varied postseason success. With Foskey, the 2019 Mercury All-Area Player of the Year, leading the way, this fall’s Boyertown boys’ team left them all in the dust.

The Bears took a collective step forward and turned it into a one-loss regular season and eventual 22-3-2 record, a PAC championship and the best performances in the District 1 and PIAA tournaments of any large-school team in conference history with a runner-up finish in District 1 and a trip to the state semifinals.

“Winning PACs, which was our first goal, was special,” Foskey said. “Getting to the district final, and our state run, it’s been unbelievable. I don’t even know if we thought we could get that far in the preseason.”

With standouts throughout the starting 11, including fellow All-Area first team selections in senior goalkeeper Mason Kurtz and senior midfielder Landon Wenger, Boyertown made the most of an identity built around a quick-passing playing style and aggressive front-foot defending that Lock Haven-bound Foskey embodied.

It was all made possible in part because of Foskey being the eyes in the back of the head of every Bear teammate.

“He is the most vocal person on the entire field every single game and that is a huge attribute of a center back, to be able to get people in proper position, being an overall vocal leader as the last defender on the field,” said Boyertown head coach Mark Chambers, who was an All-State center back as a player at Williamsport.

The Bears were considered co-favorites in the PAC in the preseason alongside Spring-Ford but separated themselves with a 15-1-2 regular season that included a season-opening win over defending district runner-up Abington and a regular season sweep of the Rams. Boyertown’s lone loss was to annual thorn-in-the-side Owen J. Roberts on Sept. 5, but it got right on Senior Night, a 2-1 overtime win ending an eight-game winless run to the Wildcats dating back to Oct. 7, 2015. It served as a jump-off point for what was to come.

“It was just a mental thing, thinking we haven’t beaten them in however many years — us as seniors we’d never beaten them,” Foskey said. “Beating them on Senior Night, that was definitely a huge boost for the rest of the season.”

Boyertown negotiated a long and varied injury list that included the entire back four, including Foskey, who missed three games due to an ankle injury suffered against Spring-Ford on Sept. 12. But the Bears’ strong mentality showed while still churning out results.

“I loved the mindset that everyone had, that even though you’re not 100 percent, still going out and pushing yourselves,” Foskey said. The postseason began with a 1-0 win over Owen J. Roberts in the PAC semifinals that was anything but simple. But Foskey was the target of a Willson corner kick with 5:21 left in overtime and the senior headed it on to the doorstep for Wenger’s headed finish for the game-winner.

Two nights later the Bears became PAC champions for the first time since 2016 with a clinical 2-0 win over Spring-Ford, a commanding defensive performance that was part of the side’s 14 shutouts on the year. On the year, Boyertown conceded just 19 goals in 27 matches, a 0.70 goals against average.

Entering the District 1-4A tournament as the No. 3 seeds, they quickly brushed off the program’s reputation for district shortcomings and rattled off back-to-back 3-1 victories over Pennsbury and Neshaminy before blanking No. 2 Lower Merion in the semifinals in overtime, 1-0 on Wenger’s game-winner.

The Bears pushed eventual District 1 and PIAA champion North Penn as much as anyone had in weeks in the district championship, but eventually lost 1-0. Boyertown bounced back in the PIAA tournament with two wins — a 4-3 shootout with District 11’s Whitehall before trouncing District 3’s Palmyra 3-0 — but fell in penalty kicks to Central Bucks West in the state semifinals, a game short of reaching Hershey.

Making the deepest run the PAC has seen since Pottsgrove reaching the Class 2A final in 2008, and doing it concurrently with the PIAA champion Boyertown girls team, made for a momentous fall and a unifying season for the whole of Boyertown.

“It’s not only that we kept winning for ourselves, but our whole community as we kept going, us and the girls’ team side by side, it just brought everyone together,” Foskey said. “People who I would never have expected to come to a soccer game were showing out. It’s not even just about the winning. To keep playing and bringing everyone together was just awesome.”

The player endlessly calling his own name for every ball he attacked or shouting instructions to teammates on set pieces is a whole different person off the field.

“Outside of soccer I’m pretty shy and quiet,” Foskey said. “I don’t really know where it (vocal style) came from. But the second I get on the soccer field all of that just goes away. It feels natural, telling people what to do on the field. Especially being a center back, I feel like that helps the most being in the back and seeing where everyone is and making sure everything is controlled.”

“It’s the complete opposite of my personality. I’m just not like that at all. And then I step on a soccer field and everything switches.”

Everything switched in a much bigger way in Foskey’s life in April. His father, Bill, died unexpectedly on April 1 at age 54.

Bill Foskey didn’t come from a soccer background, but he was his son’s most vocal supporter. Bill Foskey placed great importance on strength training, which factored into Ryan withstanding the rigors of a deep postseason run.

“He was always really big about working out and strength, and not being afraid to run through the ball,” said Ryan, the oldest of Bill and Amy Foskey’s three sons. “One of the biggest things about (the importance he placed on) working out was in his mind when I was working out I wasn’t getting injured, the more strength I was building up was preventing injuries and I’ve kept that up all through this year.”

This season, his first without his father, Ryan set out to “keep him in my mind the whole way.”

“I have a bracelet we got when he passed because he donated a lot of his body parts to other people who could use them. And I’ve been wearing this every day since,” Ryan said. “I’m not allowed to wear it during the game, but every game I would go into the captain’s meeting with the ref and after I would take it off and I look at it every time. That’s really when I would think about him before the game.”

Ryan proudly wears the light green rubber bracelet that reads ‘Donate Life’, symbolizing his father’s contribution as an organ donor upon his death.

Bill Foskey probably already knew it, but he donated something else years before. His voice.